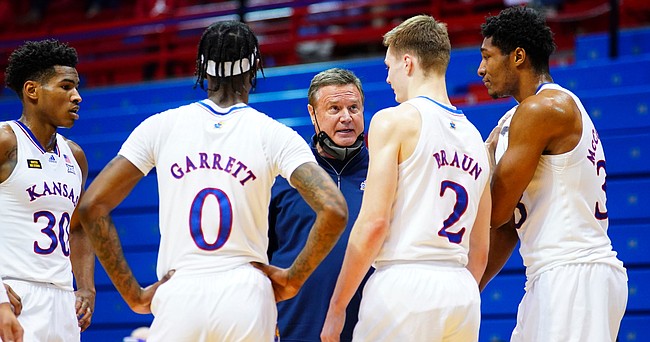 Kansas head coach Bill Self talks to his players with the game close and little time remaining in regulation on Saturday, Jan. 9, 2021 at Allen Fieldhouse.

The Kansas men’s basketball team’s Saturday home game with Iowa State has been postponed because of COVID-19 protocol issues within the ISU program.

According to a news release announcing the postponement, both schools will work with the Big 12 Conference to reschedule the game. No possible dates were mentioned and it is not yet known if any future ISU games will be impacted.

“While it is disappointing we won’t be able to play this weekend, we look forward to returning to competition when it is safe to do so,” ISU coach Steve Prohm said in a statement.

Saturday’s postponement marks the second time since the start of the season that the KU men’s basketball schedule has been impacted by the pandemic.

A mid-December game against Tarleton State was canceled when TSU officials temporarily paused basketball activities a couple of days before that game.

The Bears and Jayhawks will tip off at 8 p.m. on ESPN in the first of three Big Monday games for the Jayhawks this season.

The extra day of preparation also comes with a down side. KU now will have to wait three more days before it can get back on the court to try to move past the disappointment of losing to Oklahoma State on Tuesday night in Stillwater, Okla.

Even though that loss left the team frustrated, Self said Friday that his players had responded well to the setback and were looking forward to fixing the issues that plagued them at OSU.

“Shortcomings or poor play obviously is magnified big time when you don't win,” Self said on his “Hawk Talk” radio show Thursday night. “You know, it's not a reason to push the panic button or anything like that. I mean, it’s a long season. And it's a different type season. There's a different type of training that goes into all this that maybe some people don't quite understand.”

Asked recently about the impact of the pandemic on his team’s mental state this season, Self said he thought the Jayhawks had done a great job of playing and preparing under so much uncertainty.

“Our guys have handled it pretty well,” Self said. “But I do think it takes a toll, mentally. It is wearing. It's very tiresome.”

No one hates the Cry-Clowns more than I do. But I wouldn't wish coronavirus on even them. I hope whoever tested positive or got sick gets well soon, and I hope the game can be rescheduled so we can kick their asses even harder than the virus did.

League is lying about making up games. They are full of sh**. These games will never be played, they have no plan. It’s obvious.

I don’t know that I agree, but I also don’t care. Before this all settles somewhat, it’s going to have been a jacked up couple years. It is what it is.

The game is "postponed because of COVID-19 protocol issues within the ISU program." Sounds like lack of institutional control to me. I'm surprised the NCAA hasn't charged them with anything yet. So...when exactly are all these games going to be rescheduled? If you don't set a date to play the game, it's not really postponed.

You're joking, right? WVU, KSU, OSU, and now ISU, have all tested positive for Covid recently. Should the NCAA investigate each of their programs? The upside is, it might take the heat off KU. ;-)

Definitely joking. But if you read the article, it did say they postponed because of "protocol issues within the ISU program." It just sounded funny. I was taking a jab at the NCAA and trying to be funny. Failed at both, oh well!

I believe they left a week open at the end of the season for make up games. They likely aren't scheduling them yet as there may be more games that need to be made up than there is time to do so. In that case I'd assume they would make up the games that effect the conference championship (like the Baylor-Texas game that was postponed) while ignoring games like KU-ISU. They of course can't decide which games to play until they know how many need to be played and who's in the hunt for the conference title.

It will be interesting to see how it plays out. Depending on if the games get played, and if all of them do or just a selection of them, it brings into question the legitimacy of a regular season title.

Oh, I think that concept went out the window when they decided to play this season come hell or high water!