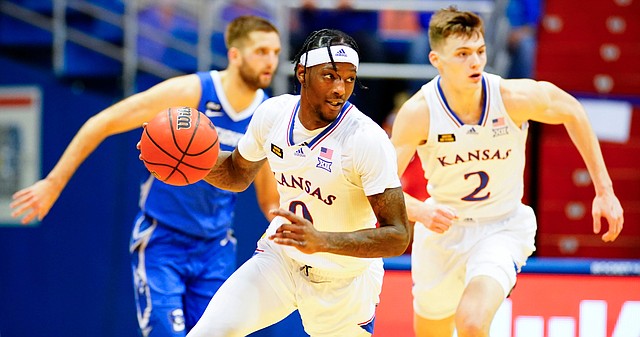 One night after watching his team win on the road without him, Kansas basketball coach Bill Self said senior point guard Marcus Garrett was getting closer to a return.

“I understand he’s feeling much better today,” Self said during his “Hawk Talk” radio show on Wednesday night. “And (he) may just need another day.”

Garrett missed Tuesday’s game with a head injury that he suffered late in last Saturday’s loss to Texas after being inadvertently hit in the face by a flying arm from Jericho Sims on a rebound attempt.

Garrett did not practice Sunday or Monday, and he tried to do a little at Tuesday’s shoot-around. But Self said the decision to hold him out was made just before the Jayhawks loaded the bus at the team hotel in Fort Worth, Texas, to head to the arena.

“Marc is a competitor and all those things,” Self said on Wednesday night. “And the medical staff wanted to make sure that he was good to go before we even thought about putting him out there. The bottom line was he still had some symptoms. So there was no decision to be made on that.”

Self said he felt awful that Garrett, a Dallas native, was not able to play on Tuesday because so many of his family members were able to make the short trip to TCU for the game.

“He was disappointed,” Self said of Garrett. “But I told him he’s got to help coach the guys, especially ’Juan, from the bench, and he did that and nobody was happier for ’Juan’s success than Marcus.”

Although the Jayhawks are hoping to have Garrett back in time for Saturday’s 3:30 p.m. tipoff with Oklahoma at Allen Fieldhouse, Self said Harris’ performance on Tuesday gave him confidence that the team would be OK either way.

“We don’t want to play without Marcus again,” Self said. “But the reality of it is, it’s not all is lost if (we) have to.”