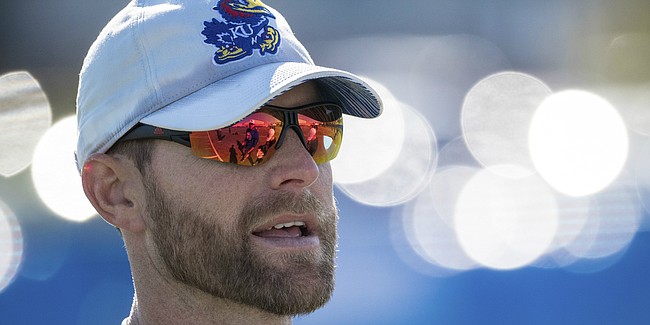 There won’t be an abundance of Brent Dearmon buyout money available for Kansas football to use when it’s paying the man Les Miles hired to replace his former offensive coordinator and quarterbacks coach.

According to a settlement agreement between Kansas Athletics Inc. and Dearmon, who left while under contract with the Jayhawks to become the O.C. at Middle Tennessee State, the amount the former KU assistant now owes his former employer is $400,000 less than the terms of his original contract.

The waiver and release agreement, obtained by the Journal-World through an open records request, states that Dearmon owes KAI $100,000, instead of the $500,000 buyout described in the contract he signed in October of 2019, when he took over at KU’s O.C.

Without wanting to divulge any specifics, Dearmon previously told the Journal-World that “family issues” led to his decision to leave KU and relocate to Tennessee.

In the settlement, Dearmon agreed to make 24 monthly payments of $4,166.67 to KAI, beginning in May. 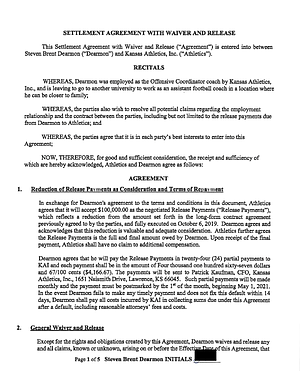 The settlement included non-disparagement terms that Dearmon must follow, stating that the former KU assistant can not “publish, directly or indirectly, any materially negative comments verbally or in writing, on social media or in any other forum to anyone about (KU, KAI) or any current or former employee of the university and/or athletics that might cause an individual to reasonably question the integrity, quality, character, competence or diligence of (KU or KAI) or its administrators, coaches, faculty and/or staff.”

KU signed new offensive coordinator and QBs coach Mike DeBord to a two-year contract that will pay him $600,000 a year. Dearmon only made $250,000 a year at KU.

In a recent interview with the McKenzie Tennessee Banner, Dearmon didn’t share the figures of his new salary, but said he received a pay raise to coach at MTSU.

Dearmon also told the Banner he and Miles had contrasting offensive philosophies regarding the use of fullbacks and tight ends. Dearmon, a proponent of the run-pass option offense and playing with tempo, prefers a more spread out approach schematically.

“What you see in an interview (on television) with Coach Miles is what you see in the locker room,” Dearmon told the Banner. “You never know what he is going to say, but he is very patient and I learned a lot from him.”

Sounds like he left for more then just family issues

A pay raise and peace of mind at the end of the day is a family reason even if it has roots in the office.

Maybe a glimpse into the question of how hands off, how much was learned in the years away from the sidelines, and why the O never seemed to take off consistently?

For $400K, it seems like the announcement could have been delayed by two days, post-National Signing Day.

So Les was okay with Dearmon leaving if they reduced the buyout? Or there is a clause if you leave for a head coaching job you get a waiver on the payout. I know he didn't get the head coaching job, but this does seem like a head coach in waiting situation...don't know, just speculating.

His last comment in this article is telling(at least to me). What you see in an interview is what you see in the locker room. You never know what he is going to say.

I’ve listened to several of his interviews. Spoke few words and those words never seemed to make much sense. Maybe Dearmon just couldn’t coach his way and deal with Miles???? Maybe....

Makes sense now why they couldn't pick a QB

Why would KU agree to a $400k reduction? I would think every dollar made or saved would be crucial to the Athletic Dept.? Would certainly help w/ DeBorg's lofty salary (almost 2.5 times more than Dearmon's)!

This news of Dearmon leaving was most distressing. I'm privy to a a lot of insider gossip, meaning it's second-hand information, but from major donors who have reliable sources, and I keep hearing that Miles has some early indications of dementia. With his age, he isn't going to be a long term solution either way, and I saw Dearmon being a potentially great coach-in-waiting option for KU. He could be part of the rebuild, learn what he can from a great coach like Miles, and when he retires in two years or so, Dearmon could be his replacement. I really believe that was the trajectory.

Now however... With him leaving this late in the Sycle, and now hearing we reduced his buyout (why?) and included a non-disparagement clause... (Is that normal in peaceful, we wish you the best, departures?) It makes me worry about the future. Why did Dearmon really leave?

Further, I'm not particularly pumped about the new OC. I don't see how High School prospects could be nearly as excited to play for him vs. Dearmon. Plus, we're paying him almost as much as what we hired David Beauty for. I'm just a bit concerned about the rebuild at this point. Dearmon was my lone source of excitement about this staff, particularly after Tony Hull left the program about this time last year.

It is typical to receive a non-disparage clause.

Dearmon was an analyst that Les Miles took a risk on, let's be honest, in his first year as OC, he didn't light the world on fire, yes there are various factors that took place, but the QB was never ready in any of the games. I'm not convinced that Dearmon was the solution for OC, let alone for HC in waiting.

Sure I'll sign a non-disparagment clause....if you reduce my buyout by half a million $$$. Is there something about HCLM that we don't want known? Fish smells....

Or maybe KU was not happy with Dearmon's performance in 2020 and had taken a great risk of making him the OC without any true coaching experience (remember he was an analyst, not a coach). This might have been Dearmon realizing that he was over his head at KU and KU agreeing with his assessment.

The primary job for Miles was to rebuild a decimated roster. So far, progress seems to have been made. But a poor season this year will put recruiting into question, so it’s about the W’s and L’s now.