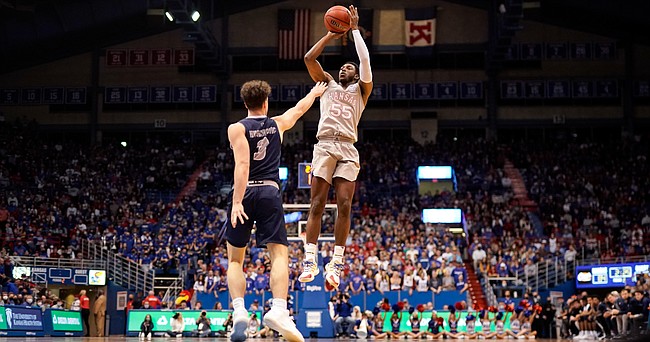 Kansas guard Jalen Coleman-Lands (55) pulls up for a jumper over Nevada guard Alem Huseinovic (3) during the second half on Wednesday, Dec. 29, 2021 at Allen Fieldhouse.

With so many games canceled or postponed in the last 10 days and the COVID-19 pandemic ripping through college basketball programs from coast to coast, Kansas basketball coach Bill Self said he and his staff have tweaked part of their practice routine in recent weeks.

“I don’t think we've done much to change anything other than when we practice, we probably don't practice with just five or six on the first team,” he said. “We try to slide as many people into that situation so there is a little bit more of a comfort level.”

Self compared the situation to football by saying it was like “making sure your second team gets first-team snaps.”

“We’re trying to do that as much as we possibly can,” he added.

On Wednesday, during an 88-61 win over Nevada at Allen Fieldhouse, the Jayhawks played 13 players, including walk-ons Chris Teahan and Michael Jankovich.

Outside of sophomore Jalen Wilson, who has settled into his role as this team's sixth man, no one from KU's bench did much.

After the victory, Self discussed the idea of shortening the bench in the future if the KU reserves were not going to produce more than that. And, during Wednesday's first half, he showed what that might look like.

As KU's first substitution, Wilson went in for starting guard Dajuan Harris Jr. a the 13:49 mark of the first half. Senior forward Mitch Lightfoot went in for David McCormack at the 12:38 mark and Jalen Coleman-Lands subbed in for Ochai Agbaji at the 10:39 mark.

The lopsided nature of the second-half score allowed Self to hand out more minutes to his reserves, but all but one of them — freshman forward KJ Adams — finished in negative numbers in the plus/minus category.

Kansas coach Bill Self said this week that injured freshman Bobby Pettiford was still working through the strained abdominal injury that has kept him out of the lineup for the past handful of games.

“He’s still doing the same thing, which is almost nothing right now,” Self said. “He’s doing spot shooting and very little things like that. It’s got to run its course before we can really test that.”

Initially expected to be out 4-5 weeks on Dec. 6, Self said that timeline could still hold if all goes well in the days ahead.

“As of right now we’ve still got a couple weeks to go before we’ll know if we can put him out there and have him be pretty much pain free,” Self said.

The 6-foot-1, 190-pound combo guard from Durham, N.C., has appeared in seven games for the Jayhawks so far, averaging 11.4 minutes per contest.

Wednesday’s game marked the third home game of December for the Jayhawks and it featured a mixture of masked and unmasked fans in the stands.

Two weeks ago, KU updated its mask policy for men's and women's basketball games at Allen Fieldhouse from a requirement to a “recommendation” and the policy current states that “guests are still highly encouraged to properly wear a mask when not actively eating or drinking. This is especially true for unvaccinated individuals, including children ages 2 years and older.”

In addition to the policy, the public address announcer on a couple of occasions reminded fans in attendance that masks were "strongly encouraged" at the game.

Although the Jayhawks will be playing George Mason instead of TCU on Saturday, six other Big 12 programs are slated to tip off conference play on Saturday.

No game will be bigger than No. 1 Baylor (12-0) battling unbeaten and eighth-ranked Iowa State (12-0) at Hilton Coliseum in Ames, Iowa.

Self said this week that the Big 12, on paper, was “better than we’ve ever had; and we’ve had some great ones.”

According to reports from Austin, Texas coach Chris Beard, whose team was picked to finish second in this year’s preseason coaches poll, said Wednesday that the preseason favorite was still the team to beat.

“Baylor is obviously (playing) well right now,” Beard said of Scott Drew’s top-ranked and defending champion Bears. “But, to me, the championship goes through Lawrence, Kansas until otherwise said.”

Wednesday’s win improved the Jayhawks to 10-1 or better for the ninth time in Self’s 19 seasons… Kansas now leads the all-time series with Nevada, 5-2, including a 3-1 mark at Allen Fieldhouse… KU has now won 24 consecutive games at Allen Fieldhouse against nonconference foes, improving to 138-5 in those games under Self… KU is 5-0 at home this season… In addition to the former KU players on Self’s staff in the building, KU alums Jeff Graves, Steve Woodberry, Travis Releford, Tyrel Reed and Sherron Collins were in attendance on Wednesday night… Class of 2022 KU signee Gradey Dick also attended the KU-Nevada game.

Pettiford is the guard off the bench that’s missing though the bench opps are still there for Joe and JCL in particular.

I guess its safe to say that Wilson has been relegated to coming off the bench , but Harris has been playing quite well , Wilson has been rebounding well but his offensive woes have kept his minutes down .There was a moment in the game after Wilson made a turnover and Self took him out ,Wilson wasnt happy ...but i didnt know if he was upset with his play or that Self took him out but his body language wasnt good .Selfs trust in Wilson or lack there of shows with his impatience when Wilson makes a mistake. Will starting Wilson help his confidence only if he plays better offensively but i was encouraged to see Wilson cheering on his teammates when he was on the bench. Whether Wilson starts or is 6th man we will need him he does have more upside than downside. As far as Wilsons draft stock it may slipping even if he had any but if that means he will be back next year I can live with that too.

Good observation Mallory. It appears that the starters are pretty set, but hopefully JWil can realize the importance of the 6th man in particular. It was Sherron in ‘08, and he logged starter minutes.

I believe a kid from Villanova even played his way into the draft from the 6th man spot. It’s not just alpha’s that get drafted. There are only two or three per team and most are already there, but many more support players are also needed. Especially Jayhawks.

Matt - Are +/- listed in box scores someplace. I didn’t find them on the e—- version?

While it can easily be shown as an individual stat, it would seem that it’s significantly influenced by the play of others on the floor at the same time, especially the way Coach expects the team to operate. That being said, it’s obvious we need improvement there.

Seeing the photo of JCL taking the 3 reminded me of Moss. Didn’t it also take him a while to get settled into the team performance?