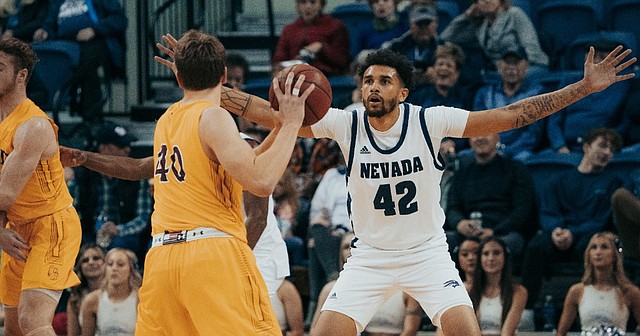 For the second season in a row, a team that did not appear on the Kansas basketball schedule when the season began will face the Jayhawks at Allen Fieldhouse.

KU officials announced Monday afternoon that the men’s basketball program will welcome Nevada to town for a 7 p.m. tipoff on Big 12 Now and ESPN+.

The Wolf Pack will replace Harvard on KU’s original schedule after the Crimson had to pull out because of injuries and COVID-19 issues within their program.

The rapid remake of the 2021-22 Kansas men’s basketball schedule continued late Monday night, when KU officials announced that Saturday’s Big 12 home opener versus TCU had been postponed because of COVID-19 issues within the Horned Frogs program.

According to reports out of Fort Worth, Texas, TCU’s Wednesday game against Texas Southern was canceled earlier in the day because of COVID health and safety protocols.

TCU joined Oklahoma State in postponing its Big 12 opener because of the pandemic.

According to KU’s release announcing the postponement, “KU is currently working with the Big 12 Conference to reschedule the game for a later date this season that works for both teams.”

As with Wednesday’s Nevada game as a replacement for Harvard, all tickets purchased for the TCU game will be valid for the rescheduled game later this season.

The cancellation of the Harvard game was announced by both schools on Sunday evening and the TCU news a day later made for two significant schedule changes in roughly a 24-hour period. That, of course, followed last week's cancellation of KU's road game at Colorado.

A statement released by Kansas Athletics indicated that the Dec. 29 game with Harvard had been called off “because of a combination of injuries and positive COVID-19 tests within the Harvard program.”

Per a statement on Harvard’s website, “The Ivy League continues to keep the safety of its student-athletes, staff and greater campus communities at the forefront of its decision-making during the COVID-19 pandemic.”

Both schools also said the game would not be rescheduled this season.

The Harvard cancellation was the second in a row for sixth-ranked KU, which also had last week’s road game at Colorado canceled because of COVID issues within the CU program.

While announcing the Harvard cancellation, KU officials said the program was looking for an opponent to take Harvard’s spot and come to Lawrence on Wednesday for a game at Allen Fieldhouse.

Coached by third-year head coach Steve Alford, the Wolf Pack will come to Lawrence riding a five-game winning streak and at 6-4 overall.

After opening the season with a 91-76 win over Eastern Washington, the Mountain West Conference program dropped four straight to San Diego, Santa Clara, San Francisco and South Dakota State before righting the ship.

Ranked No. 77 overall by KenPom.com — Harvard was No. 173 — Alford’s team features a top 50 offense and a defense that ranks in the top third of all Division I college basketball teams.

Nevada had been scheduled to face San Jose State on Wednesday night in California, but that game was canceled on Sunday night because of COVID-19 issues within the SJSU program.

On his "Hawk Talk" radio show Monday night, Kansas coach Bill Self reiterated his stance that players, coaches and programs would need to remain flexible and avoid frustration in order to get through what has suddenly become a very challenging schedule to execute.

“During these times I don’t think you can put anything on being too important, that you have to do something, because the chances of you doing it the way you want to aren’t very great (because of COVID),” Self said on the show. “It was important we play somebody (on Wednesday). I don’t know if that is as important as having a team full of healthy guys where you can practice every day. The fact we can get a game in, at least as of today — that could all change tomorrow — (is a good thing)."

Alford’s team features MWC Preseason Player of the Year Grant Sherfield, a 6-foot-2, 189-pound junior guard from Fort Worth, Texas, who started his career at Wichita State after finishing his prep career at Sunrise Christian Academy.

Sherfield leads the Wolf Pack at 20 points per game while shooting 40.4% from 3-point range.

Nevada was picked to finish third in the Mountain West in the conference’s preseason coach’s poll.

Prior to any of the changes, Self was asked on Dec. 17 whether he was concerned about COVID impacting the 2021-22 schedule. At the time, he said he was bracing for issues and indicated that keeping a clear head was the key to getting through it.

“I think it’s one of those things that you’ve got to deal with it, roll with it and don’t try to manage the unmanageable — and don’t get too frustrated when things happen,” he said.

Self said then that KU's entire roster had been vaccinated and that all but “a couple” of Jayhawks also had received their booster shots.

Cancellations and last-minute additions have become commonplace in college basketball throughout the past two seasons. Last season, entire schedules were scrapped in the weeks and days leading up to the start of the season, which, itself, was in jeopardy because of the pandemic.