Jayhawks looking for a replacement for Dec. 29 home slot 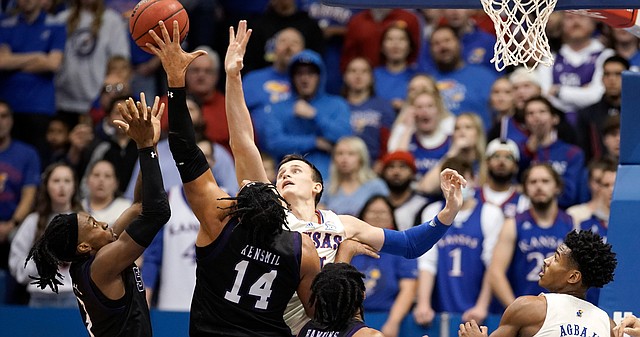 Kansas forward Mitch Lightfoot (44) looks for a rebound with Stephen F. Austin forward Gavin Kensmil (14) during the first half on Saturday, Dec. 18, 2021 at Allen Fieldhouse.

A statement released by Kansas Athletics indicated that the Dec. 29 game with Harvard had been called off “because of a combination of injuries and positive COVID-19 tests within the Harvard program.”

The statement also said the game will not be rescheduled this season.

Per a statement on Harvard's website, "The Ivy League continues to keep the safety of its student-athletes, staff and greater campus communities at the forefront of its decision-making during the COVID-19 pandemic."

Shortly after the announcement of Wednesday's cancellation, Kansas coach Bill Self told the Journal-World that all of his players made it back to campus from winter break on Sunday and that the team was practicing Sunday night.

The cancelation is the second in a row for seventh-ranked KU, which also had last week’s road game at Colorado canceled because of COVID issues within the CU program.

While announcing the Harvard cancellation, KU officials said the program was looking for an opponent to take Harvard’s spot and come to Lawrence on Wednesday for a game at Allen Fieldhouse.

The statement notes that all tickets issued for the Harvard game will automatically be transferred over to the new game. Details will be released as soon as a new opponent is finalized.

Although he said he did not immediately feel the need to makeup the Colorado game, Self said Tuesday that he believed more games, across college basketball, would be canceled moving forward and that he would be more likely to add games to KU’s 2021-22 schedule if the Jayhawks suffered future cancellations.

Filling in for Self on his “Hawk Talk” radio show on Wednesday night, KU assistant coach Kurtis Townsend predicted that KU likely would look for a replacement for Harvard if something were to happen to that game. The idea, Townsend said, would be to find a team that was already scheduled to play on Dec. 29, therein easily filling the slot for both programs.

If KU cannot find someone to take the game, the Jayhawks will be forced to go two full weeks between games — if not longer — with the last game coming at home on Dec. 18 and the next slated for Jan. 1 at home against TCU in the Big 12 Conference opener for both teams.

Prior to either cancellation, Self was asked whether he was concerned about COVID impacting the 2021-22 schedule. At the time, he said he was bracing for issues and indicated that keeping a clear head was the key to getting through it.

“I think it’s one of those things that you’ve got to deal with it, roll with it and don’t try to manage the unmanageable — and don’t get too frustrated when things happen,” he said.

Self said then that KU's entire roster had been vaccinated and that all but "a couple" of Jayhawks also had received their booster shots.

Cancellations and last-minute additions have become commonplace in college basketball throughout the past two seasons. Last season, entire schedules were scrapped in the weeks and days leading up to the start of the season, which, itself, was in jeopardy because of the pandemic.

KU added a game to its 2020-21 schedule — UTEP at home — during the final week of the regular season, which was left open to create opportunities for Big 12 programs to schedule makeup games. KU did not suffer any Big 12 cancellations last season and therefore had the opportunity to add a nonconference opponent to remain sharp heading into the postseason.

Where might Kansas look for a replacement for Harvard? In his latest "Tale of the Tait" blog, Matt Tait offers up his initial thoughts on who the Jayhawks might call first.