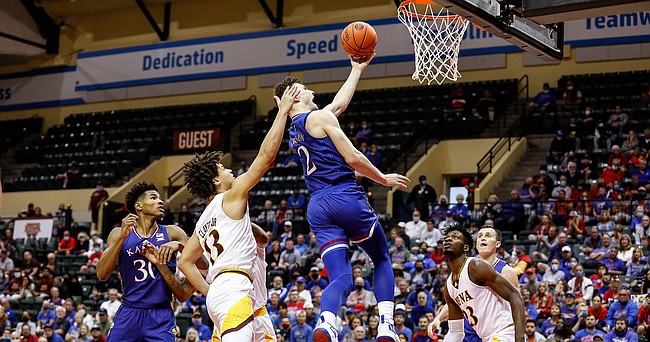 The last time this Kansas basketball team took the floor, it was able to unleash nine years worth of pent-up energy and aggression toward bitter rival Missouri.

That challenge made it rather easy for the Jayhawks to explode out of the gates, burying the Tigers with a jolt of energy and an attack-mode mentality that made sure the 102-65 KU victory was never in question.

Junior guard Christian Braun was the point man on that and he set the tone for the onslaught in the game’s first five minutes. Given Braun’s family history with Mizzou, Kansas coach Bill Self said it made sense for Braun to be that guy. Now, Self wants to see Braun be that guy against every opponent KU faces the rest of the way.

“I really think a lot of CB’s (passion) was because it was Mizzou,” Self said. “I hope he’s that way when we play Stephen F. (Austin).”

Self is less worried about a repeat performance in the passion department from the player he described before the season as KU’s Energizer Bunny.

“Remy’s (energy) will be (good again), regardless,” Self said of senior transfer Remy Martin. “I think Remy probably (creates) it more than anybody.”

While increased intensity and fire on game nights often leads to easy baskets, success on defense and even opponent intimidation, Self said that type of approach benefits one of the game’s key intangibles, as well.

“I think it’s contagious,” he said. “I think it’s good. I think it’s positive. I don’t like stale and those guys (Braun and Martin) certainly are not stale.”

Self is hoping that the home crowd will help out, as well. But he knows that expecting the same environment they had for Missouri is hoping for too much.

Self pointed to Stephen F. Austin's marquee road wins at LSU, at Duke and at Baylor in the past few seasons as a reason for people to believe this one could be harder than it appears on paper.

"They're capable of coming in here and giving us problems just like they did those other teams," he said.

2. The next step for Dajuan Harris Jr.

Last weekend, the Missouri Tigers made no secret about the fact that they wanted the KU point guard to shoot. So he did.

And after being quiet as a scorer most of the season, Harris knocked in five of six shots from the floor, including three of four from 3-point range, to finish with a season-high 13 points.

It remains to be seen how the rest of KU’s opponents will handle defending Harris. But even if they don’t beg him to shoot it — giving him wide-open shots in the process — that Mizzou game could go down as the game that unlocked Harris’ confidence on offense.

With Ochai Agbaji and Christian Braun scoring at all-conference rates so far this season, Harris has not needed to score. Add to that the fact that Remy Martin can get a shot just about any time he wants and David McCormack is still the guy the Jayhawks want to play through and it’s easy to see how Harris would be less concerned about his own offense on most nights.

But he has shown before that he is a capable scorer when he operates with an aggressive mindset. His play down the stretch last season helped KU almost entirely because he became a threat to score. And he looked good doing it.

He took open 3-pointers in rhythm and looked confident releasing his shot. That opened up driving lanes and easy buckets at the rim, as opposing defenders began to respect his outside shot.

Harris is rarely going to be more than the fourth or fifth option on the floor at any given time for the Jayhawks. But if he can at least pose as a threat to score, and be willing to do it, that will change the way defenses guard the Jayhawks and make life much easier for the Jayhawks who are taking the majority of KU’s shots.

3. Clean up the glass & take care of the ball

Two areas of strength for the Lumberjacks also happen to be areas that can help teams pull off improbable upsets.

So it’s important for the Jayhawks to be sharp in both of them.

Stephen F. Austin ranks in the top 40 nationally in both offensive rebounding percentage and defensive turnover percentage. So it’s imperative that KU is disciplined on the defensive glass and with the basketball.

Per KenPom, SFA is getting back its own misses on 35% of available opportunities. That ranks 29th nationally and is seven percentage points better than the national average. Put another way, the Lumberjacks get an offensive rebound on better than one of every three missed shots.

In addition, Stephen F. Austin also ranks 29th nationally in defensive turnover percentage, forcing foes into a give-away on 23.4% of possessions. That’s more than 4% better than the national average and puts the onus on Martin, Braun, Agbaji and Harris to take care of the ball in transition and the halfcourt.

“The pace of the game will be dictated by how many times they turn us over," Self said. "They make it really hard to get open one pass away. But if you can attack pressure properly, you’ve got a chance to play with some numbers behind it.”

The Jayhawks have been good in ball security so far this season, turning it over just 15.6% of the time, which ranks 28th nationally.

In addition, KU itself is 17th in offensive rebounding percentage — getting back 37.1% of its misses — and just off the national average in preventing teams from finding success on the offensive glass. KU ranks 137th nationally in the latter category, allowing an offensive-rebounding success rate of 26.9%.

The SFA game notes reference the Lumberjacks as #PressU for their pressure defense all over the floor. Last season, Stephen F. Austin finished sixth in the nation in turnovers forced (18.1 per game) and fourth in steals per game at 9.5.

“They don’t really press, they pressure," Self said. "They may do some trapping and stuff in the half-court, but it’s not like it’s all-out extended like a lot of teams that you would think would leave the country in steals.”

Although he stands just 6 feet, 7 inches tall, Kensmil weighs in at 260 pounds and has proven to be a load for opponents to handle so far this season.

“They play with the truest form of a post man that we’ll see all season long," Self said. "He's the best that we’ll go against all year long at scoring before the catch. He’s a load.”

In addition to leading the Lumberjacks in scoring and rebounding at 16.2 points and 7.3 rebounds per game, the senior from Suriname is ranked fifth in the nation in fouls drawn per 40 minutes at 7.8.

Although he’s averaging just 28.6 minutes per game, his propensity to force opponents to foul him could be something to watch in this one. So far this season, his size and strength down low has led to nearly seven trips to the free throw line. The fact that he’s only shooting 61.3% when he gets there has kept Kensmil from being an even bigger problem for foes.

We already know that Lightfoot is never afraid to foul. Never was that more obvious than last weekend against Missouri, when the super-senior picked up three fouls and fouled out in about a minute during the second half.

Lightfoot is KU’s leader in fouls committed so far this season (26), despite averaging just 11.1 minutes per game. Not far behind him, in second place on the team, is McCormack, with 21 total fouls in 19.7 minutes per game.

Both Jayhawks figure to have a length advantage on Kensmil. And McCormack, at 250 pounds and a few inches taller, should be able to push back.

But it’s not a sumo wrestling match that’s taking place Saturday. It’s a college basketball game. And if Lightfoot and McCormack are too foul happy against Kensmil, it could earn them a seat on the bench and force the Jayhawks to go small or ask freshmen K.J. Adams and Zach Clemence to hold down the lane for the home team.

While both are capable, their lack of experience and maturity would make that a matchup that favors Kensmil.

“I know he’s a strong body and he plays to angles as well as we do," McCormack said. "Defensively, we have to play him early, before the catch, kind of get him out of his scoring area.”

After a crushing, one-point, last-second loss to Dayton in Orlando, Fla., the Jayhawks have rebounded with four consecutive victories of convincing fashion.

None of the four were particularly impressive on a national scale — at St. John’s was the toughest game of the bunch — but all of them were relevant because they showcased a shift in mindset for this team.

Even with a statistically stellar offense charging forward, defense has become this team’s top priority and its leaders — players and coaches — have emphasized it at a new level.

The Jayhawks have gotten off to great starts in all nine of their games so far, but sustaining those starts and pulling away was, at times, a tough ask. In recent weeks, though, the Jayhawks have done exactly that, adding validation to their areas of emphasis and delivering comfortable victories along the way.

The Jayhawks have two more of those types of games at home on both sides of a tough road test at Colorado next week before jumping into Big 12 play. And Agbaji, Braun, Self and others have continued to emphasize using the nonconference slate to prepare for the rough and tumble Big 12 slate that awaits.

Stephen F. Austin, with head coach Kyle Keller being from Self’s coaching tree, should provide the Jayhawks with another good opportunity to face a tenacious team that plays hard throughout and puts a premium on execution.

Tuesday’s 13-point loss to Louisiana-Monroe snapped SFA’s four-game winning streak and left some pondering exactly what went wrong. It came one game after SFA lost veteran guard Roti Ware to a torn MCL in a win over Liberty.

Up to that point, Stephen F. Austin’s two losses had come to teams ranked in the KenPom.com top 100 — a 12-point loss to South Dakota State and an 11-point loss to St. Louis. But Monroe entered the game ranked No. 214 and was never really threatened by the Lumberjacks.

Stephen F. Austin’s schedule thus far features four wins over non-Division I teams and three more against teams ranked No. 126 or worse. SFA’s best win, on paper, came via a 79-78 victory in a neutral-site setting over No. 72 Buffalo.

Saturday’s matchup will be the first ever clash between Kansas and Stephen F. Austin.

KenPom has the Jayhawks listed as a 22-point favorite with a 98% chance at victory.

Bill Self on KU facing a former player, Covid's impact on college hoops and much more by KUsports.com

David McCormack on how KU approaches a game after atmosphere of Missouri matchup by KUsports.com

Give the points, take the over.

KU should win by double digits. Only way this is not over on points is if SFA press's the ball full court to limit the possessions.

Matt, if SFA is # 29 in each of the two categories you mention, that would put them in the top 30 nationally, so why are you only saying that they're in the top 40?

Yaaaawwwnnn! Wake me up when we play someone worth a damn.

It is interesting that we have not, nor will not play anyone ranked till Jan. 8th!

Hope our soft schedule does not hurt us for conference play.

TCU is the only other team in the B12 not to play anyone ranked.