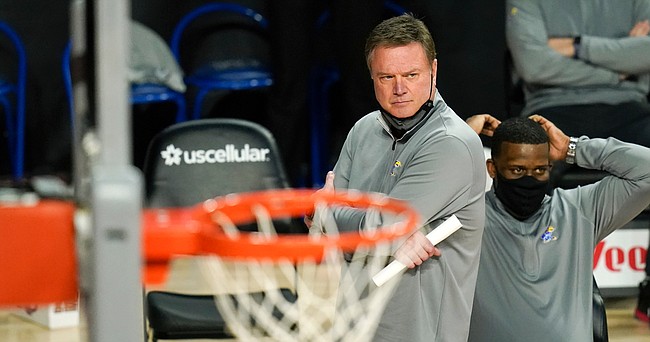 Kansas head coach Bill Self watches from the bench during the second half of an NCAA college basketball game against Iowa State, Saturday, Feb. 13, 2021, in Ames, Iowa. Kansas won 64-50. (AP Photo/Charlie Neibergall)

As COVID-19 cases among players in the NFL, NBA, NHL and college basketball in recent days have games being postponed and rescheduled, Kansas basketball head coach Bill Self is knocking on wood while feeling “fortunate” that the Jayhawks haven’t yet encountered such issues.

“We’ll probably have to deal with it at some point in time this year. I hope not,” Self said on Friday, while speaking with reporters. “I’m just glad we’re vaccinated and boostered up, and hopefully that’ll be enough to get us through.”

Self said on KU’s team, nearly everyone has been vaccinated and received a booster, with just “a couple” left who need a booster.

“We’re in pretty good shape there,” he added.

This past March, KU ran into COVID-19 issues and had to withdraw from the Big 12 tournament. David McCormack, Tristan Enaruna and Jalen Wilson had to be away from the team as the Jayhawks prepared for the NCAA Tournament. McCormack rejoined just in time to play in the first round of March Madness, while Wilson returned on the day of KU’s second-round loss to USC.

Self said he feels good about the Jayhawks now, but expressed concern about how players around the country are still turning up with positive results, leading to stoppages and cancellations.

“I think it’s one of those things that you’ve got to deal with it, roll with it and don’t try to manage the unmanageable — and don’t get too frustrated when things happen,” Self said.

Both Ohio State and UCLA ran into COVID-19 cases this week, leading to those programs canceling high profile matchups with Kentucky and North Carolina, respectively, in Las Vegas. Now the Wildcats and Tar Heels will square off at the CBS Sports Classic, which was supposed to be a doubleheader featuring UCLA-UNC and Ohio State-Kentucky.

At this point, there is no daily testing protocol in place for NCAA athletes and coaches like there was last year. Self said at KU, such tests are only administered when someone has symptoms.

The NBA this week implemented new COVID-19 protocols that include an increase in daily testing. Self doesn’t think such measures are looming for college sports, because of the expenses involved with testing every day.

“We’ll take whatever precautions the medical people say we should take,” Self said. “But last (season) was such an unknown. Nobody was vaccinated last (season).”

KU senior David McCormack said players already have heard from Self and KU’s staff about being safe and smart when players go their separate ways and are away from the team for the holiday break next week.

McCormack said players have been and will continue to be proactive and accountable when it comes to the pandemic.

“Being mindful of the actions you take, where you go and how you may distance yourself, just keeping in mind that you don’t want to sit out unnecessarily,” he said.

Self said he’s not worried for college basketball as a sport right now, as teams and games become impacted by positive cases and outbreaks. But he thinks some teams might encounter “week to week” situations this season if cases keep popping up.

“We’ve done everything we could to prevent it,” he added.

Well Coach, the intial reports on Omicron released on Rueters 12.17 are not promising. From both the UK and a group in the USA the reports say:

Looks like another round of Lockdowns, masks and limited or no fans are in store. Leagues in Europe are seriously looking at a pause until the weekend of Jan. 8th. Look at our sports teams at every level they are starting to feel it too.

Dr. Osterholm, MN who is one of the key leaders in the USA on how to fight epdemics, said this week "that the 3 varients for the year, show that Covid 19 is not done, nor anywhere close to over with".

He said, "we might be done with two years of this but the virus is not". Unless we fight it with one mindset, it will continue to mutate and disrupt our lives. This will last past 2023 and unless we get on the same page who knows when it will end he said. The Public, all business (especially Healthcare) and Governments are stretched as thin as it can get and we might have to start over to get rid of it.

Think about it, Delta rose out of India, Omicron out of South Africa. This is a global, all hands on deck response or we will repeat the same cycles over and over.

Sadly, it is endemic. Stay safe. Find humor where possible.