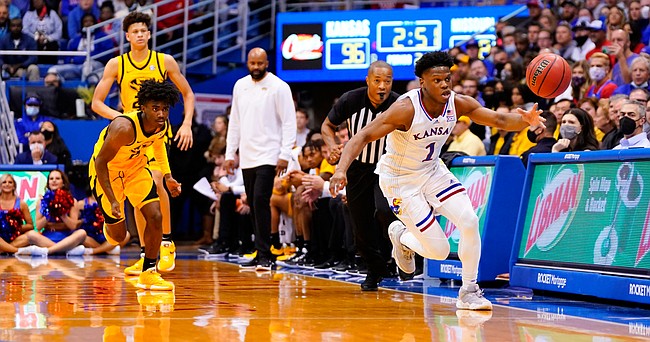 Kansas guard Joseph Yesufu (1) chases down a steal from Missouri guard Anton Brookshire (0) during the second half on Saturday, Dec. 11, 2021, at Allen Fieldhouse.

Seven games into his Kansas career, sophomore guard Joe Yesufu found himself in the enviable position that so many former Jayhawks probably wished they could have been in during their time in Lawrence.

With freshman guard Bobby Pettiford sidelined because of an abdominal injury, Kansas coach Bill Self openly campaigned for Yesufu to shoot the ball more and unlock his offensive potential.

“I told him (recently), ‘Just guard the heck out of the ball and shoot it,’” Self said of his brief conversation with Yesufu ahead of KU’s win over UTEP. “You can talk defense and I know I’m a big fan of it, and all this stuff, but Joe’s a scorer. And I think sometimes he’s focused on trying to play the way I want him to play and doesn’t play the way he’s best capable of playing.”

According to his past, that’s as a dynamic offensive threat.

During his three most recent full seasons of basketball prior to coming to Kansas, Yesufu’s scoring averaged landed in the teens. He averaged 16 points per game as a senior at Bolingbrook High and 14 points per game the year before.

A knee injury cost him all but nine games of his freshman season at Drake, and he responded to that by averaging 13 points per game for the Bulldogs during the 2020-21 season. That run included a scoring clip of 23.2 points per game during the final nine games of the season. During that stretch, he hit at least four 3-pointers in a game five times and scored a career-high 36 points in a win over Evansville.

There’s little doubt that this Kansas team has more scoring punch around it than the Drake squad Yesufu played on a year ago. But Self and Yesufu’s KU teammates have constantly been on him about finding his confidence and tapping back into his scoring ways.

“Everybody,” Yesufu said when asked which of his teammates had been in his ear about becoming a bigger part of the offense. “They’ve definitely seen that I’ve been hesitant about a lot of things. I’m trying to do what’s best for the team, whatever it takes. So, I’ve been trying to defend (and) do everything outside of scoring. But they’ve been preaching to me that I just have to score. Do what I do best.”

With Pettiford out of the lineup, it seemed as if Yesufu — along with super-senior Jalen Coleman-Lands — were first in line to get a longer look and more minutes on game nights.

But in the two games without Pettiford so far — both Kansas victories — Yesufu has played just over 18 combined minutes and shot the ball just five times.

He played 10 minutes in the UTEP win but was 0-of-2 from the floor, misfiring on his only 3-point attempt and turning it over twice. That outing limited him to 8 minutes in last weekend’s win over Missouri, and he shot 1-of-3 from the field and added another turnover in mop-up duty.

While it’s clear that Self would like to see more from Yesufu on the offensive end, he said he thinks his defensive potential is sky high.

“Marcus (Garrett) was our best defender,” Self said for clarity’s sake. “I haven’t forgotten about him. “But, as far as applying pressure and still being able to keep them in front and everything, (the best we’ve had was Jeff Hawkins). I think Joe could be in that same category as Jeff. He’s a very good on-the-ball defender. But off the ball, he’s still learning stuff and picking stuff up.”

Although he showcased his scoring potential toward the end of last season, Yesufu said he did not have a preference for which end of the floor he helps his team. He knows he needs to score more when he’s out there. And he wants to. But he takes just as much pride in being a pesky defender.

“That’s very meaningful,” he said. “When I’m being a pest on the ball, people can easily get steals and deflections and all that. My whole thing is to make everybody else comfortable and bring energy to the floor.”

The only way he can do that is by being out there, and unless he finds a way to add some scoring punch to his defensive pride, his minutes could remain limited moving forward.

Didn’t realize he had previously been limited by a knee injury. In some ways he’s like a freshman coming in and learning. Hopefully, it clicks for him soon so he can start playing more than thinking, but even more that he keeps working till it does click. It would be really nice to have his impact off the bench, and will be important at some point during the season.

Exactly right, Dirk. He had a great few weeks toward the end of last season, but prior to that he was barely just getting started. He's still so young and packed with potential. The best thing for him and KU would be if they didn't need him this year. Don't know if that's the case or not yet. TBD...

Thanks Matt. There’s generally an opportunity for someone to pull a freshman Cole/UNC even if it’s not in the FF. There’s so much talent on the roster this year that Joe won’t be needed in general. Hopefully he keeps working so he’s ready when that time comes.

I think what's most interesting about all of it, and why I think Self and company continued to give multiple players long looks, is the idea of just how much better this team would be if all of these players — starters and non-starters — were to hit their ceiling at the same time.

There's still time for that to happen. And it helps that the front-line guys seem to be pretty consistent and reliable in terms of production. If it does, there's no doubt that this would be a top 2 or 3 team in the country with a real shot to make a memorable run.

Won't come easy. The Big 12's a beast. But it should be fun to watch it all play out.

Great point. He gave lots of latitude to Tyshawn when people were ripping him for it, and TT wasn’t producing, but he knew TT had elite potential which almost resulted in another NC.

Dirk and Matt: Great discussion but the only problem is with limited playing time it is very hard for some of these guys to hit their stride. Some players are comfortable coming off the bench in limited minutes and some aren't.. With regards to Joe he looks like he is trying to do way more to show coach what he can do and just seems to be rushing his game. My guess is if he was playing 20-25 minutes a game you would see a different guy.

Thanks David. It seems to me that history has taught us those longer minutes that us fans sometimes question (early versions of Marcus and Christian) are given by Coach Self when the players get all the off ball assignments that most fans and even players prior to arriving just don’t know. Joseph is in his own head thinking about all his assignments. It eventually clicks with the players we remember. I’m glad Joseph is taking pride in his D and continuing to work at all of it. Looking forward to it clicking.

Sub Harris with Yesufu, that's fair, see if how much he impacts a game or two. As David said, give him more play time.