Kansas quarterback Miles Kendrick looks to pass during the first half of a game against Kansas State on Nov. 6, 2021, in Lawrence, Kan.

The Kansas football program’s quarterback depth for 2022 took a hit when two reserves — Miles Kendrick and Conrad Hawley — decided to leave via the transfer portal.

KU head coach Lance Leipold confirmed Wednesday during his early signing period press conference that both QBs are moving on.

Leipold said their departure was one of the factors in KU recruiting and signing Class of 2022 quarterback Ethan Vasko, out of Chesapeake, Virginia.

A redshirt senior for the Jayhawks in 2021, Kendrick could have potentially used the NCAA’s 2020 Covid waiver for an extra year of eligibility to remain at KU, if that was a scenario both he and the coaching staff wanted to pursue. 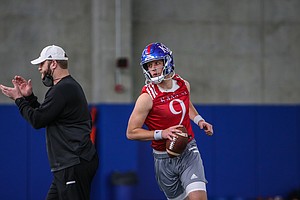 Hawley, who was a member of KU’s 2021 recruiting class, arrived on campus early this past January. As a true freshman, he never appeared in a game, which will allow him to use a redshirt for this year and join another program with four years of eligibility remaining.

Kendrick spent much of this fall as the Jayhawks’ backup QB. But just when an injury to Jason Bean during KU’s Nov. 6 home game versus Kansas State opened the door for Kendrick to contribute, he suffered a lower leg injury that ended his season.

While appearing briefly in five games for KU in what would be his final season with the program, Kendrick went 12-for-18 as a passer, with two touchdowns and one interception, while throwing for 106 yards.

Throughout last offseason, leading up to head coach Lance Leipold’s debut, Kendrick was often cited as one of the program’s leaders and a key voice in the locker room.

Sophomore QB Jalon Daniels said after he became the starter in November that he wanted to follow Kendrick’s example as a leader.

“Seeing Miles Kendrick, being able to go out on the field, rally up the troops, talk to guys, being able to get get their ego up,” Daniels said of how he wanted to resemble the veteran.

A 5-foot-10, 203-pound QB from Morgan Hill, Calif., Kendrick started two games for KU during his four years with the Jayhawks. Both of the starts came in 2020, as KU dealt with injury issues. In his career, he appeared in 16 games.

Recruited to KU as a junior college prospect at College of San Mateo (California) in the Class of 2018, he leaves KU as a graduate transfer having gone 96-for-157 (61.1%) through the air, with 853 passing yards, nine TDs and six interceptions. Kendrick threw for a career-best 168 passing yards in a home loss to TCU late in the 2020 season.

A 6-5, 220-pound QB from Raymore, Missouri, Hawley was recruited by former KU offensive coordinator and QBs coach Brent Dearmon. He was a three-star prospect according to Rivals, before signing with KU.

KU players who exited via portal

It seemed that every time Kendrick got a chance to start, an injury derailed the opp. Can't blame him for wanting a shot at playing one last year. I'm recalling that he won some of the offseason workout awards for being a leader there as well. I don't recall any other non-starters that have provided as much leadership in the past, and for that reason think he deserves much appreciation. Rock Chalk Miles.

Well, the QB position was a bit crowded, especially with sub D1 talent. Hate to say it.

He is a true Jayhawk in that he gave his all to the team and the school. He sees that his QB career is nearing its end and wants an opportunity to play more in his last season. He sees that requires he transfer to somewhere else. I fully understand that. I wish him the best and thank him for all he did for KU. Once a Jayhawk, always a Jayhawk.

Well damn. I was looking forward to Hawley, a local guy, to take over in a couple of years. I wish him well as long as he doesn't go to MU or State.

Hopefully Vasko is the real deal.

Me, too. I thought he had the right tools and had a future at KU. Sorry to lose him.

I think that similar to recruiting a point guard, you're trying to recruit QBs for a two year cycle, hoping that the starter plays for a couple of seasons and hands it off to a redshirt sophomore or junior that learned the system and got some backup game reps and then plays for two or three seasons and the process repeats. Obviously with injuries or transfers you always need a few more, but that would be my approach, especially in a major conference like the Big 12. You wouldn't want to bring in a freshman and throw them into the fire unless they're a 5 star sure thing, and even then they'll have growing pains.

Still have Bean and the Eastman (?) kid from Iowa, so at least 4 QBs…

Just the first of many Portal jumps.

Feel for the college coaches, the roster is in a state of flux everyday. They never know when somebody decides for whatever reason to press the ejection button and leave. The reverse is in play too.

I would say the portal is surreal, but it was 65 today in Chicago. Lots of things are no longer the same anymore.

We might need to amend the definition of the word normal.

In some ways, one of the freshmen QBs was some what expected to join the transfer parade. It’s not completely unreasonable to bring in 2 freshmen at a one-man position and let them battle through a redshirt year. It would appear that Easters won the first battle.

It also sounds like Coach Leipold knew this was coming before being publicly announced hence the recruiting of Vasko. Vasko does look like a quality recruit and nice to get the distribution of players spread across all the classes.

You might be referring to Ben Easters from Brownsburg, IN.

You could make enough butter to bake enough Christmas cookies to feed the Army w/the amount of churn going on these days.