O is for Offense: How Kansas guard Ochai Agbaji has gotten off to a hot start and why many believe it will continue 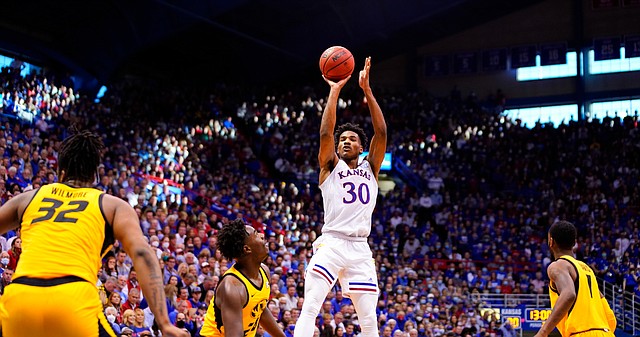 Kansas guard Ochai Agbaji (30) pulls up for a jumper over Missouri forward Kobe Brown (24) during the second half on Saturday, Dec. 11, 2021, at Allen Fieldhouse.

When Kansas guard Ochai Agbaji woke up on Monday morning, there was no one ahead of him on college basketball’s scoring list.

Nine games into a senior season that almost never happened, Agbaji leads the nation in scoring at 22.4 points per game.

The senior from nearby Oak Park High in Kansas City, Mo., has topped the 20-point mark in seven of KU’s nine games this season, while leading the Jayhawks in scoring in seven games, as well.

That includes a game-high 21-point effort in last Saturday’s blowout win over bitter border rival Missouri and a career-high 29 points in the season opener against Michigan State.

After the latter, which came at the high-profile Champions Classic in New York City, Agbaji was asked about his decision to return to school instead of jumping to the NBA. He said he came back for games, and moments, like the ones that happened that night. More importantly, he said without hesitation that he thought he made the right choice.

It’s been nothing but more memorable moments and validation since that night, and the KU senior is showing no signs of slowing down.

Always a capable scorer, but never asked to be the go-to guy, Agbaji spent his first three seasons at Kansas focusing mostly on two things — defense and being a good teammate.

One was directly tied to the other, and his reliability on the defensive end earned him the trust of All-American type players like Dedric Lawson, Devon Dotson, Udoka Azubuike, Marcus Garrett and others.

For most of Agbaji’s career, it was those players (and a few others) who carried the scoring load for Kansas. But now it’s his turn. And he has taken to the opportunity nicely, using many of the elements that allowed him to succeed in a supporting role to make him a monster as the team’s top option.

“It’s really crazy just to see the grand scheme of things, coming from my freshman year and different roles and how I played from year to year,” Agbaji said recently of his transition into becoming KU’s leading scorer. “This team that I have now, they have the most respect for me and I have the most respect for them, too. I think having that chemistry with them carries me and makes me feel comfortable being in this position.”

Part of Agbaji’s success as a scorer so far this season has come because of his comfort as a leader.

While the departure of many of his former teammates left a void in KU’s scoring column, it also opened up an opportunity in the leadership department. Agbaji jumped at that the way he skies above defenders while looking to finish an alley-oop.

“I fell into that role naturally,” Agbaji said. “Everyone was on this different wavelength of, ‘He’s the guy that’s going to lead us.’ From the second I got here in the summer, everyone knew that I was on a mission. I feel like it was more just follow my lead (and) watch how I work, day in and day out.”

That work, and an increased amount of attention to detail and pride in his craft, not only has pushed Agbaji’s point total up, but also made him a much more efficient player.

He has recorded his 22.4 points-per-game average while taking fewer than 15 shots per game on average. In fact, while scoring 23 points in a recent win over UTEP and 21 against Mizzou, Agbaji needed just 12 shots in each game.

Beyond that, nearly all of his attempts have come within the regular flow of the Kansas offense. He’s shooting 57.5% from the floor and a Big 12-best 49.1% from 3-point range.

The current KenPom.com player comps for Agbaji now include NBA players like Buddy Hield and Josh Hart, among others. And several prominent mock drafts have Agbaji firmly in the first round of the 2022 NBA draft, including Jonathan Givony’s most recent mock at ESPN.com, which listed Agbaji at No. 23 overall in next year’s draft more than a month ago.

“Ochai has just grown with every year; he’s excelled every year,” current KU teammate David McCormack said of Agbaji’s career arc. “I know he’s a crazy athlete and he’s probably built on that even more.”

Earlier this season, KU freshman Bobby Pettiford said Agbaji was “the best player in the country.” KU junior Christian Braun, who at times has shared the load as KU’s top scoring option, repeatedly has said that what people are seeing today is the real Agbaji. Braun does not believe it’s a hot stretch or an anomaly of any kind. “That’s who he is,” Braun insisted after KU’s win over UTEP.

Kansas coach Bill Self has continued to praise Agbaji’s production while still holding onto the belief that the 6-foot-5 senior has even another gear or two he can go to. Getting to the free throw line more often than the three trips a game he’s currently getting is at or near the top of Self’s wish list for Agbaji’s next step.

But it’s not just Agbaji’s current teammates who have been impressed.

“Ochai always had the potential to be a great player,” former KU forward Dedric Lawson told the Journal-World this week. “He played with so many other scorers his freshman year that I really didn’t see him as a scorer, but an overall great player.

“He was just a sponge. Anything you tried to help him with, he always listened and he was a cool person in general. I’m happy for him and the season he’s having. The way he has been consistent has been great for the team.”

Abaji and the seventh-ranked Jayhawks will look to keep their strong start going at 7 p.m. Saturday, when they play host to Stephen F. Austin at Allen Fieldhouse.