According to documents obtained by the Journal-World, only the first two years of the deal are guaranteed. The contract was signed this past Friday. Jones left KU on Dec. 6 to become the passing game coordinator and receivers coach at Texas Tech.

“We are very excited to add Coach Samuel to our staff,” Leipold stated in a release, “as he has a proven track record of success and player development on and off the field.”

Prior to coaching Syracuse’s receivers this past season, Samuel was UNLV’s passing game coordinator and receivers coach in 2020, after spending 2011-19 at Michigan State, where he coached receivers the first eight years and defensive backs in 2019. Going further back, he coached running backs at Nebraska-Omaha in 2007, and defensive backs, outside linebackers and special teams between 2003 and 2005 at Nebraska-Omaha.

Leipold, Samuel and KU offensive line coach Scott Fuchs all previously worked together at Nebraska-Omaha, in the early 2000s.

“I’m confident this will continue to help build our program alignment,” Leipold said of hiring Samuel. “He is a relentless recruiter, who works very hard at building relationships with the players in his position room.”

The guaranteed portion of Samuel’s deal expires on February 28, 2024. But KU Athletics has an option for a third year, and could potentially keep Samuel on the staff through the 2024 season if it chose to exercise it.

As part of the contract, KU agreed to pay a $45,000 buyout to Syracuse, Samuel’s most recent employer. And if KU decided to terminate Samuel’s contract at some point, he would have to reimburse KU for that $45,000. 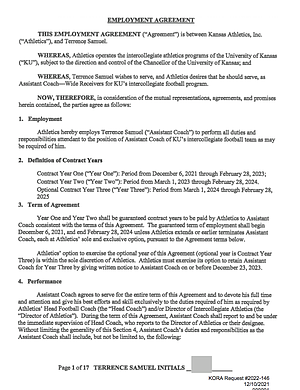 The deal includes some potential incentives, as well, which are tied to theoretical postseason benchmarks for the program.

Each potential non-cumulative bonus amount is below and would be worth the listed percentage of his salary in the year that it occurred:

• 20% for making the college football playoff.

Additionally, there is a 5% bonus payment for KU appearing in the Big 12 championship game.

Those incentives mirror the ones given to other members of the coaching staff, who were hired by Leipold back in May, when he took over the program.

Terms of the contract state that if KU decided to fire Samuel without cause, it would owe him 60% of the remaining amount left on his deal at that time. But if KU were to fire him for cause (misconduct), it would only be obligated to pay him up to the date of termination, and not beyond it. Those stipulations also were included in the contracts for the former Buffalo assistants who followed Leipold to KU earlier this year.

If Samuel wanted to get out of his contract before it expired, and resigned or looked to take a job with another team, such a move would require a buyout that would pay KU 50% of the remaining amount due to him at that time, under the terms of the contract.

If Samuel were to leave KU for a head coaching job or a coordinator position with play-calling duties, though, he would owe KU nothing.