Kenny Logan Jr. will be 'back for more' as a KU football senior in 2022

Anyone worried about the future plans of Kansas football safety Kenny Logan Jr. got some reassurance on Thursday, when the defensive back from St. Augustine, Fla., announced he’s not going anywhere.

The KU defense’s — and the entire Big 12’s — leading tackler (113) in 2021, Logan took to social media to inform the public of his plans to be “back for more” with head coach Lance Leipold and the Jayhawks in 2022.

“I appreciate all of the support from Jayhawk nation this year,” Logan wrote, in a graphic he posted to Twitter. “Our team is already focused on the 2022 season and continuing to build this program to the standard you all deserve. We made progress this year, but the work is just beginning with Coach Leipold and my teammates. I’m proud to be a part of this program and am hungrier than ever for success. Rock chalk!” 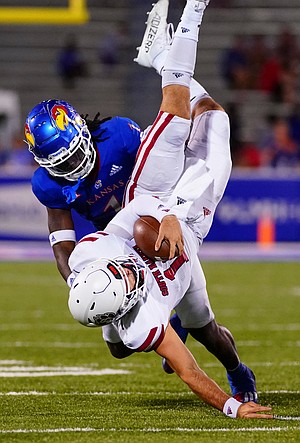 Named a second-team All-Big 12 defensive back by the league’s coaches following his junior season, Logan’s message to KU’s fans signaled he once again has no intentions of using the transfer portal to finish out his career elsewhere.

But Logan stuck around, and has spoken on numerous occasions over the past several months about why he wanted to keep playing for the Jayhawks when he didn’t have to.

“I felt like once I started something I had to finish it,” Logan said this past summer on the subject. “It was definitely a thought process, but after sitting down with Coach Leipold and just understanding and hearing him out and just seeing the vision that he had for us, I felt like it was my best option to stay here and continue what I started.”

Throughout the 2021 season, Logan proved to be one of the defense’s most important players. As of the conclusion of the regular season, Logan’s 79 solo tackles rank third in the nation among all FBS players. Per KU, the junior safety is the only FBS player with at least 110 tackles, six pass breakups, two forced fumbles and four tackles for loss.

KU finished Leipold’s first season in charge with a 2-10 overall record and 1-8 mark in the Big 12, but showed signs of improvement in the final three weeks of the season, with an overtime win at Texas and a pair of one-score defeats.

In 2022, Logan is expected to once agin be a team leader, this time within a rising senior class that includes linebackers Rich Miller and Gavin Potter, center Mike Novitsky and tight end Mason Fairchild.