So how close is Leipold to naming the No. 1 QB for Friday’s season debut versus South Dakota?

“Closer than we were the last time we talked,” Leipold joked on Monday, during his press conference. “We’re getting there. And whether or not we’ll announce it publicly before kickoff is still to be determined. But it’s working in that direction.” 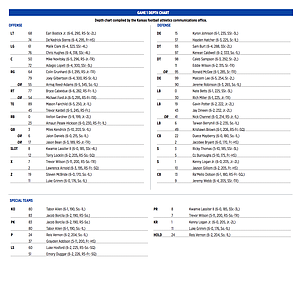 The only other position where competition for the starting job remains ongoing is at right tackle, where redshirt freshmen Bryce Cabeldue and Michael Ford Jr. were listed as options.

Regardless of which young tackle starts against South Dakota (7 p.m., Friday, on ESPN+), KU O-line coach Scott Fuchs said recently he doesn’t feel like he has to rely solely on one of them.

At the other skill positions, the initial depth chart listed the following players as starters: junior Velton Gardner at running back, super-senior Kwamie Lassiter II as a slot receiver, sophomore Trevor Wilson (Buffalo transfer) as the X-receiver and sophomore Steven McBride as the Z-receiver. Junior Mason Fairchild was listed as the first-string tight end.

There were no starting spots for the defense left unresolved on the depth chart.

Here’s a look at the first-stringers for each position group:

The backups on KU’s offensive line include some veterans with recent starting experience. Super-senior Chris Hughes is listed as the second string left guard and super-senior Adagio Lopeti is behind Novitsky at center.

At right guard, though he doesn’t have the game experience of Hughes and Lopeti, senior Joey Gilbertson is one possible sub for Grunhard.

On the defensive line, the reserves included two notable veteran tackles who used to play at Buffalo: both Eddie Wilson and Ronald McGee were listed as potential backups for Sampson.

At the other tackle spot, sophomore Kenean Caldwell is a backup. At D-end, senior Hayden Hatcher and sophomore Jereme Robinson appeared on the second string.

KU’s linebacker reserves also featured a former UB player, junior Rich Miller. The middle linebacker spot, where Potter plays, could be backed up by either senior Jay Dineen or junior Nick Channel. Redshirt freshman Krishawn Brown was behind Berryhill on the two-deep.

In the secondary, the backups are almost all freshmen, with graduate transfer corner Jeremy Webb the one exception. Freshman Jacobee Bryant is the other No. 2 corner and both backup safeties — Jayson Gilliom and O.J. Burroughs — are true freshmen.

The long snapper entering the season is Luke Hosford, a sophomore. Vernon will also serve as a holder with the specialists.

The Jayhawks have some options with their returners on special teams. The depth chart listed Lassiter first at punt returner, followed by Trevor Wilson. At kick returner, Logan is listed first, with Grimm behind him.

Wish that one year we had a QB that was good enough to separate himself from the others. We have seen this scenario too many times over the last decade.

Remember that Reesing didn't win the job in August. And in today's rules, we would have got him for one more year.

Please win a game this season.

Doesn't matter to me whom the QB is as long as they can move the offense consistently. You know effective not perfect.

Jeff - By today’s rules we might have had him for another year. The way his senior year went, we had a better chance with Parchment and Robinson.

The D goes from about as old as can be at the DL to about as young as possible with the DBs.

Speaking of DBs, is there another team with CBs bigger than the safeties?

In between, was anyone predicting Berryhill/Brown as a 2deep?

Coincidentally, the QBs are listed in reverse alphabetical order.

@Marc - While I agree with you, Carter hadn’t separated till the very end 2 years ago but still responded with one of the best years since Todd. Maybe it’s a dumb and dumber comment but there’s a chance?

All three Qbs will play. Give them each some experience. Looking for methodical and basic approach.