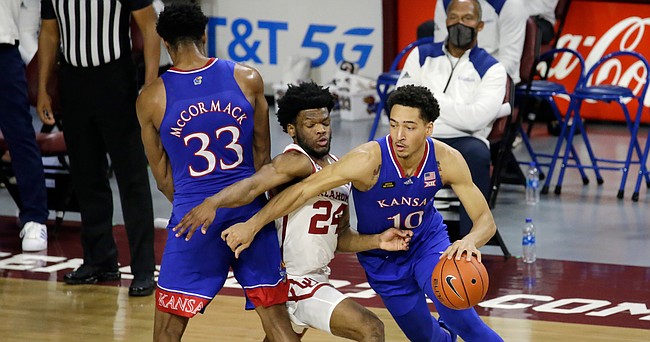 With roughly a month still to go before the first official practice of the 2021-22 Kansas basketball season, KU coach Bill Self is starting to take inventory of what this team has while not putting too much stock in anything just yet.

“We’re a deep team,” Self said Monday before teeing off at his annual golf tournament to benefit the Boy Scouts of America at The Jayhawk Club. “And we’re an old team. We’ve got some good young kids, but, I mean, Jalen Wilson would be a pup (on most teams) and here he is he started basically every game for us last year.

With five super-seniors, two true seniors and two more juniors on the roster, half of KU’s 18-man lineup is made up of upperclassmen.

And then there are those younger players like Wilson, along with Dajuan Harris Jr. and Joseph Yesufu, who are starting their third years of college while carrying the sophomore tag on the official roster.

“We are as old as we’ve been in a long time,” Self added.

While that experience has helped in the early going — the team reported back to campus and began preseason practices a week ago — the fact that 10 of the 18 players on this year's roster are new to the program means there’s still a lot to work out before Self and his coaches, along with KU’s veterans, feel like everybody knows what’s going on without having to think too much about it.

“The returning guys know,” Self said Monday. “But, for the most part, (the rest) don’t know. But that’s OK. It’s August and we’re figuring it out and (we’ve got) a lot of personalities and we’re figuring out what buttons to push with everybody, but it’s been a great group so far.”

Per NCAA rules, the Jayhawks can work with coaches for up to eight hours a week until moving to 20 hours a week when full practices begin in September.

KU will continue on that path until the start of boot camp in mid-September and that will lead into Late Night in the Phog on Oct. 1.

The first official day that practice is allowed by NCAA rules is Sept. 29, 42 days before the team’s season opener on Nov. 9 against Michigan State at the Champions Classic in New York.

While the team on the court will use every bit of that time to come together and build its bond, there are a handful of off-the-court logistics that remain uncertain heading into the season, as well.

Self said Monday that, as of today, he was expecting full capacity on game nights at Allen Fieldhouse this season.

“I don’t know if there’ll be restrictions, such as masks or whatever,” he said. “But I believe we will (have a capacity crowd) as of now. Until somebody tells me different, we’re definitely moving forward like that.”

Last season, KU played in front of roughly 2,500 fans at most of its home games — socially distanced and wearing masks — because of precautions put in place because of the COVID-19 pandemic.

If we weren’t in a pandemic B horror film, I would compare this team to the 2008 NC team. On paper it looks like we have more than enough (no 18-player pun intended) for a Final 4 run and a possible National Championship. It will be interesting to see how the season starts off. Can Coach make them a team? I think he can. Should be a Heck of a Ride!

To be fair - don't we think every year, the team compares to the 2008 NC team at some point only to be disappointed come tourney time?

Not every year lol

IIRC, we also got bounced by an LA school the year before (‘07). The big difference between now and ’07-08 was the multiple years of experience that team had together. I’m not sure 7 of the top 8 players (or something like that) will be drafted from this team. Then again things change when you win or play in the FF.

I know it's cliche, but feels like it is a nice blend of experience and young talent. We just need to get consistent perimeter shooting back into the foray. The only team that seems relatively similar to the 08 team in my mind is the lost March madness season of 2019-2020. We'll never know how that would've done. But the were 28-3, a ridiculous 17-1 in conference and their three losses were to Duke ( 30 turnovers and first game of the season) , Villanova and Baylor. All top 15 teams that season. They certainly had the look, could dominate you defensively and had two stars at PG and Center. It's a shame!