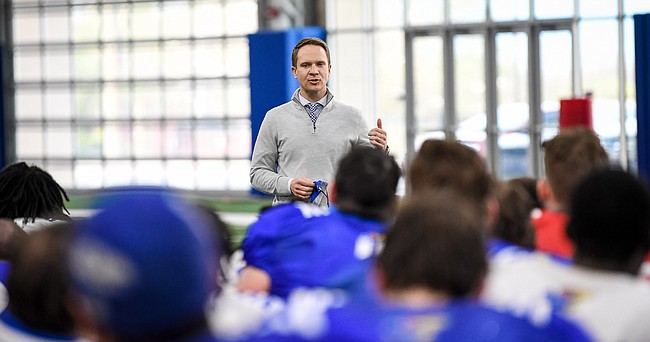 A national search for the next head football coach at the University of Kansas is back on — this time with a different athletic director in charge.

Still in his second week on the job as KU’s new AD, Travis Goff announced in a letter emailed to donors Thursday evening that he is initiating a national search to find a permanent replacement for Les Miles.

In the email, obtained by the Journal-World, Goff stated that he met with interim head coach Emmett Jones, the KU football staff and the team’s players on Thursday to inform them of his decision.

“I have emphasized to that group how thankful I am for their leadership and commitment during this challenging time,” Goff wrote. “Coach Jones has done an outstanding job in this interim role and will be a candidate in this process.”

Goff was hired in early April to replace former AD Jeff Long, who stepped down in March in the wake of Miles’ covered up sexual harassment scandal at LSU years back.

Long had briefly embarked on a national search to replace Miles, but it didn’t go very far, as Long stepped down two days later.

A 2002 KU graduate and former Northwestern deputy AD, Goff stated in his message to donors that he has taken “ a diligent approach to evaluating all aspects of our football program in order to identify the best path forward.”

According to Goff, he observed the football program up close, and asked questions about what KU football needs in its leader.

As players told reporters last week, Goff also asked them to express their thoughts about the head coaching vacancy.

The new AD’s plan is to reach out to former KU football players and Ring of Honor inductees, too, to hear their ideas about what kind of coach the program needs.

“A thorough national search will ensure we find the ideal fit to lead this program into the future,” Goff wrote, “and I am very confident we will do just that. We will take the time necessary to identify our next head coach and ask for your patience and support during this important chapter for Kansas football.”

This marks KU’s fifth coaching search since Mark Mangino was forced out following the 2009 season.

Whew, thought the University was going to limit itself to a Regional search...

This is a waste of time & money. We've soaked the donors enough. Give Emmit the conn and let him run for a year.

Giving Jones the role would be the con.

Oh boy, here we go again. This ought to be good. I don't know why we need an Athletic Director. Why not just run the department by committee of large donors? After all, that's how we got Charlie Weis.

If we could showcase some of our young talent the coaching pool would be much larger after this season. If we should actually win 3 or 4 games then it may be a moot point. I fail to see what we'd gain by essentially throwing out another spring practice and potentially having a mass exodus of players. Sigh.

Gene Chizik!!!!!...I have been saying it for years.....he is perfect..Period!!!!!...checks all the boxes!....Please reach out .....my archive comments before Miles was hired go into the details of why he is the right choice for Kansas!