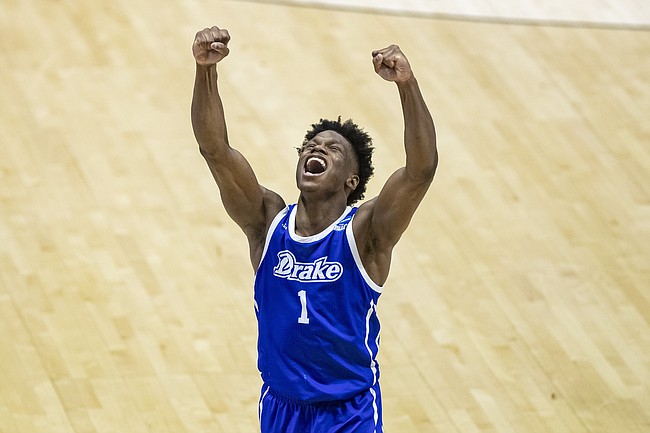 I can do all things through Christ! #BlueBlood #GoJayhawks 🔵🔴 pic.twitter.com/euHBW6Cb6k

None by Joe Yesufu

Looks like Braun better step up his game if he still wants to be a starter.

Sounds like a very good addition to the team!

Welcome to the Kansas family Joseph

With the addition of Joseph, Kansas would appear to be at it's scholarship limit for next season assuming the return of Ochai, J Wil, DMac, Dajaun, Braun, Bryce, and Jossell

So in order to add another commitment after Joseph someone else will have to free up a scholarship.

how does this impact TyTys recruitment?

I've seen and read that we are a long shot to land him. Looks like it will be Illinois or Kentucky.

I'm a KU grad and live in Des Moines, so had the opportunity to see Yesufu play at Drake. He started the year as the 6th man, backup to Drake's starting point guard Roman Penn. After Penn incurred a season-ending injury, Yesufu took over and did a fantastic job of leading Drake to the NCAA tourney.

He will be a great addition to the Jayhawks.

Thanks for the local input

This article from earlier today at 247Sports shows Kansas still in the mix for Forward Stanley Umade from South Dakota and Forward Christian Bishop from Creighton 247sports.com/LongFormArticle/Top-available-basketball-prospects-in-the-transfer-portal-version-20-163793151/#16379315

Umude would be a great pick. He looks really fluid, can create his own shots, and does not look fear taking them at all. We want this kind of player. A very solid skill. No need training. Our player skills development coach sucks anyway.

Perhaps this explains why we did not get McKissic or some of the others being recruited who committed elsewhere. I liked what I saw of him in the tourney. He's got size, is very athletic and court savvy,

this looks like a pure "we need to be more like Baylor: tough as nails, agressive, small guards that can get after it and shoot 3s with confidence" Can't argue with the results there. He just looks a bit underwhelming and slow-ish athletically from the eye test, but maybe that's just because he's so wide...

If he can put the ball in the basket we want him!

But hey it did work for Baylor- not a lot of size from those 3 star guards, but wow. When will we ever see 4 starters who average in the 40s from 3 on the same power-5 roster again? That was sick. An anomaly I hope...

Baylor has at least 4 guards on their roster that are better than our best. Mitchell is like Marcus Garrett on steroids. Baylor doesn't ask their bigs to do anything except play D, rebound, dunk, and set picks.

David needs to go into Self's office every morning and ask: Can you hire Danny Manning? I want to be great.

no joke bville, that was a once-in-a-generation backcourt BU put together, that sure takes pressure off the typical "bigs" in such a system. It will be interesting to see what kind of Frankenstein rotation Bill puts in place to make the most of his new roster.

Do we say buh-bye to TyTy?

Mkay, we either get a big, or a shortie. But looking at how Yesufu played last season.. A gutsy player - I like him already. This kind of player is what KU needs. With guts, with fire, with hops, with bounces. This kid has it all. He can shoot, he can pass, he can score, 2pt, 3pt, he can even DUNK!!!! He can teach the rest of current roster how to do it, those who are still sticking around....

BTW, what do you or coaches see in Ty Ty? Such a mellow player. lame.. no offense. We want tigers not mice!!!

IDK which Ty Ty you talking about - but he's an absolute beast. Clearly you haven't followed up. I'd take Ty Ty over Yesufu any day. Big miss with Ty Ty though, but Self is great at doing the ol' switcheroo.

We already with these additions are 50% better than last year. We should all appreciate that Coach did not just say we'll be better next year. Fact is this team needed shaking up. The good news is we have nearly everybody back, and the bad news is ...

Yes, everybody returning should be better next year, if they aren't with this kind of depth, they may be playing less.

I especially like the emphasis on players who are not tentative and who can score around the basket. We were so bad at that last year. Watch Yesufu in the game against WSU for example. He was lights out. And yes he plays defense.

It like the dogs from “Up” with the ability to type.

No, I think it mostly had to do with the fact that they'd been off for three weeks because of Covid and it was just their second game back. Remember, they were even worse in the game before playing us, but they barely escaped with a victory.

Sooooooo were going into next season with 1 proven big man .......Dave Mccormack ...I dont consider Mitch a true big although he has played the post his whole career . Self cant afford to not play and develop Clemence because I'm looking beyond next year we havent attracted any true big men that can play lately. Self said Muscadin was a great practice player but wasnt ready for game action Self plan to hold out Muscadin for next year didnt pan out because Gethro transfered out so we wont know if he would have helped next year ....but you did have him in house.We will have a good compliment of guards and wings but a rim protector and dominate inside presence you also need