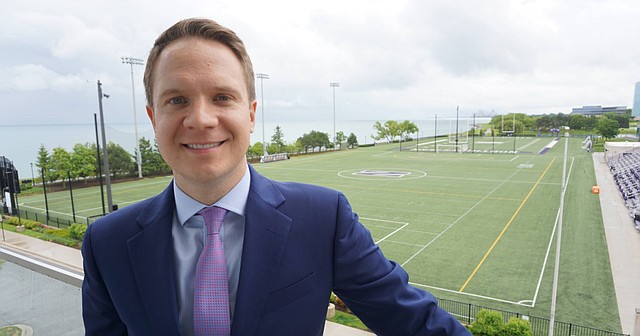 Travis Goff, a 2002 graduate of the University of Kansas and native of Dodge City, has been named the school’s new athletic director, KU Chancellor Douglas Girod announced on Monday afternoon.

Goff becomes the fifth AD hired by Kansas since the late Bob Frederick retired in 2001.

“It truly is an honor and a privilege to steward the next chapter of Kansas Athletics, and I am extremely grateful to Chancellor Girod for his belief in me and our shared vision for the future,” Goff said in a news release announcing the hire. "As a native Kansan and Jayhawk alumnus, I’m thrilled to return to Lawrence with my family and to continue to make this department a point of pride for our entire university. I cannot wait to get started.”

Goff will be formally introduced at 10 a.m. Wednesday at the Lied Center on KU's west campus and will begin his new job immediately. Goff’s contract will pay him $700,000 annually for at least the first 3 years of a 5-year deal. The contract was signed by both Goff & Chancellor Girod, and attorneys for both, on Monday. 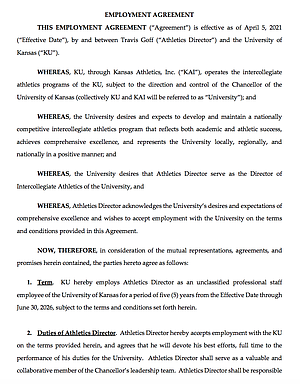 Goff graduated from KU with degrees in journalism and sociology and Girod called his KU ties "an added bonus" that "will undoubtedly serve him well as he moves Kansas Athletics forward."

For reference, KU’s search to identify Long as the replacement to Sheahon Zenger in 2018 lasted seven weeks. News of the hire also comes just three days after KU announced that men's basketball coach Bill Self had signed a "lifetime contract" with the university.

Goff, 41, takes over at his alma mater after nine years as the Deputy AD at Northwestern, where he oversaw football, volleyball and baseball and played a big role in the Wildcats’ fundraising efforts which yielded $440 million since the time of his arrival.

Goff worked under former Northwestern AD Jim Phillips, who recently left the school to become the next commissioner of the Atlantic Coast Conference. After Phillips’ departure, Goff played an important role in helping Northwestern find its next AD. That job has yet to be filled.

Goff arrived at Northwestern after a stint as an Associate AD for External Affairs at Tulane, where he received his master’s in business administration in 2007.

“Travis stood out among the candidates due to his experience, his reputation as a man of integrity, and his demonstrated ability to connect with faculty, staff, alumni and donors," Girod said in the release. "I am especially impressed with Travis’ vision for KU. Travis understands the challenges we face and the changing landscape of collegiate athletics. At the same time, he is well-positioned to help us build on our recent successes in student-athlete healthcare, diversity and inclusion, and student-athlete academic achievement."

He comes to KU with experience in nine different coaching searches to his name and also as a recently named up-and-comer in college athletics administration by both the Sports Business Journal and College AD publications.

Phillips, who called Goff both "an incredibly strong leader" and "a rising star" in the 2018 College AD write-up, said in KU's news release that Kansas "made an exceptional hire."

“Travis is an extraordinary leader that was involved as a decision maker in all areas at Northwestern," Phillips said. "He is a servant leader who will work tirelessly for all Jayhawk student-athletes, coaches, administrators, alumni and fans. His vision, work ethic and high intellect will serve Kansas well."

Goff inherits an athletic department with several needs that will command his full attention right out of the gate.

In addition to hiring a full-time football coach to replace Miles, the KU men's basketball program is still working through the NCAA infractions case against the program, which includes five Level 1 violations, including a lack of institutional control tag and a charge of head coach responsibility.

In addition to those endeavors, Goff will be asked to lead the department through several post-pandemic financial challenges that will come with Kansas Athletics operating with an annual budget that is 20-30% lower than it is used to.

Also looming in the not-too-distant future are the renegotiation of the Big 12's television contracts, — not to mention KU's third-party deals — which some in the industry are predicting could spark another round of conference realignment.

Described by those who know him as "a really good guy," Goff's familiarity with all things Kansas, from his beginnings in Dodge City to his time as a student at KU and, later, a short stint working in the athletic department before heading to Tulane, made him a name to watch from the outset of KU's search.

Goff called his new job "one of the most humbling responsibilities and opportunities in college athletics," and said the department, under his leadership, would focus on "fostering our student-athletes’ academic, social and athletic development; supporting our talented coaches and staff; connecting with alumni and donors; and, most importantly, building a culture that allows 16 proud programs to compete for Big 12 Conference and national championships while representing our department, our institution and our community."

— Stay in touch with KUsports.com for much more on this developing story.