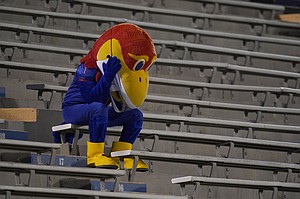 I'm hoping that the True Freshman players are red-shirted and allowed to gain muscle, speed, agility and expand their football knowledge in the 2020 season. Jalon Daniel getting last second mop up minutes did get him a little exposure to the D-1 level.

7 captains seems like a lot. Also, we maybe we will play better with an earlier game. While it's still the last Big 12 game of the day, it's not so late. Who knows?

“The Big 12 is using antigen testing from Virtual Care for Families for the tests given to players, coaches and support personnel the day before games are played. The Quidel Rapid Antigen tests used allow for 15-minute results and batch testing capabilities.“ Most of these rapid tests are problematic - many false positives. I hope KU followed up with a more definitive rRT-PCR test for viral RNA.