Apparently the Kansas football team’s ongoing quarterback competition remains too close to call, a little more than a week before the Jayhawks’ 2020 debut.

That doesn’t mean KU will try to play both Thomas MacVittie and Miles Kendrick when the season arrives, though.

Head coach Les Miles indicated this week he would stick with whomever is No. 1 on the depth chart when KU kicks off versus Coastal Carolina on Sept. 12, instead of rotating QBs in and out.

“I think the advantage would be with the guy that we put on the field and kind of stay that way,” Miles said, when asked during a video press conference about the possibility of playing both QBs.

That replicates Miles’ approach in his first year at KU. Although Miles didn’t announce Carter Stanley as the starter until the team’s opener against Indiana State, Miles stuck with Stanley and never revisited the preseason competition that seemed to go down to the wire between the redshirt senior and MacVittie. 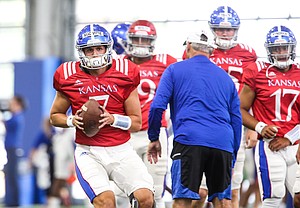 Now it’s MacVittie, a 6-foot-5 QB from Cincinnati, Ohio, who is the senior, battling 5-10 junior Kendrick.

Miles said the competition most likely will last into next week, the first game week on the calendar.

“I don’t think there’s any real hurry to that,” Miles said of reaching a verdict, reiterating his stance on the matter throughout the preseason. “We’ll kind of wait.”

Neither QB has been made available for interviews the past couple of weeks, after both fielded questions on Aug. 20.

Some of their teammates who have watched the two contenders at KU’s closed practices and scrimmages attest that it’s a close race, but not a contentious one.

Senior center Api Mane said Kendrick and MacVittie remain tight as they vie for the job.

“It’s still (up) in the air and they’re gonna compete all the way until next Saturday,” Mane said.

Sophomore defensive back Kenny Logan Jr., a possible starter as a safety or Hawk, also maintained both MacVittie and Kendrick are near equals.

“Both of those guys are doing well actually,” Logan said, “so I can’t really differentiate between the two. I try to play both of them even and well, because they’re both great quarterbacks.”

According to Miles, of late he has witnessed leadership out of both MacVittie and Kendrick, and he said both have demonstrated the ability to run Brent Dearmon’s offense.

“So I think it’s probably as much as anything a compliment to how hard both of those men have worked,” Miles said of Kendrick and MacVittie.

Though neither has ever started at QB in an FBS game, Miles predicted that KU will have “two real quality quarterbacks” from which to choose.

Once the time is right.

“We know where we’re at and we like where we’re at,” Miles said, “but we’re going to kind of pause and allow competition to fully express itself as we go into the (game) week.”

I think the approach taken with Stanley last year was one of the most impressive signs that this coach is different. After Coastal Carolina, I desperately wanted to see what MacVittie had to offer. I’d seen Carter for awhile and was ready for something different, even though I always respected his toughness and perseverance. Clearly, Miles had a better plan. And man did he stick to it. And, as Tait pointed out In his column, Stanley had the best post-Reesing year of anyone who took a snap in blue since Todd graduated.

If I were a betting man, I’d wager Kendrick. But I would have wagered MacVittie last year. My thinking being, if it’s close, start the guy who returns next year. Of course, it might not even be close.

Excited to see who comes onto the field next weekend.

We have a pretty good arsenal at running back. I’m sure there will be formations with either 2 backs, or 1 back with Pooka out wide, etc. with that said, I’m thinking the quarterback with best and most accurate arm gets the nod, not because of their dual threat status.

So fired up to see our Jayhawks on National TV and provide some payback to CC. I know were young but I feel we are going to see a much improved ball club. Rock Chalk!!

Steven - I like your optimism though it makes me wonder about your mental health. Besides Pooka, we have less than 150 yds returning at RB. Velton was good (5 ypc) in limited action. That’s about it. It would be great if Torry and Amauri or others can be productive but there’s no collegiate evidence.

Dirk, I hear what you are saying. In reading threads throughout the offseason from Tait and players themselves, I am optimistic about some good backs. I’m dang sure not Miles or Dearmon, but I’m sure they will go with who they think gives us the best shot. Stanley did not have any speed at all, yet Pooka garnered so much attention, that he could get a few yards every time it was a fake pass/run play. He just couldn’t scramble like a Todd Reesing. Even when Todd scrambled, it was to buy time. Man he wanted to throw the ball and not run. We could really use that kind of QB. I think we have good enough receivers. Just need a good accurate arm. I guess that was my point.

Definitely good enough at WR, and hopeful for some production from TE. As mentioned, the key to the season will be calling plays that don’t have Pooka facing a stacked box over and over again, and the QB being able to accurately get the ball to the receivers. (60% definitely, preferably 65+%)

Will this be on National TV, or some Jayhawk Network?