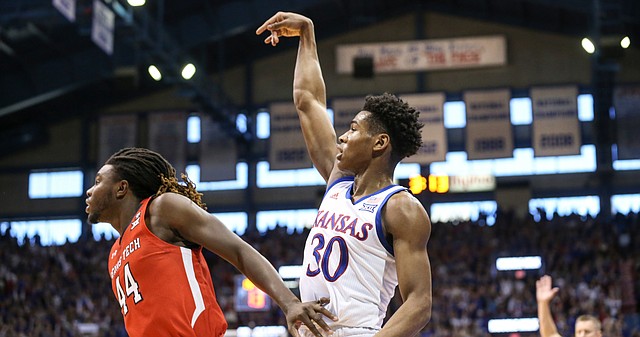 Kansas guard Ochai Agbaji (30) hangs his hand after hitting a three over Texas Tech guard Chris Clarke (44) from the corner during the first half, Saturday, Feb. 1, 2020 at Allen Fieldhouse.

College basketball’s decision to move the 3-point line back 16.75 inches for the 2019-20 season had a minimal impact on KU’s overall 3-point shooting.

As a team, KU’s 3-point percentage was 1.1% higher than the Division I national average, a sign that the rest of college basketball had a tougher time adjusting to the deeper shot than the Jayhawks.

According to KenPom.com, last season was just the second since 2001-02 in which the national average dropped below 34%. 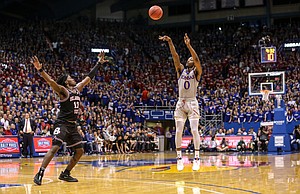 Kansas guard Marcus Garrett (0) hoists up a three during the first half against Oklahoma State guard Isaac Likekele (13) on Monday, Feb. 24, 2020 at Allen Fieldhouse.

While two of the Jayhawks’ top 3-point shooters during the 2019-20 season improved their percentages from the previous season (Ochai Agbaji and Marcus Garrett), the Jayhawks, as a team, also attempted and made far fewer 3-pointers than in recent seasons.

To be fair, the pandemic-shortened 2019-20 season, which cost Kansas anywhere between two and nine games, kept the Jayhawks from cracking 200 makes, ending a streak of five consecutive seasons with at least 213 3-pointers.

If Kansas had hit its season average and at least reached the Big 12 Tournament title game and NCAA Tournament Final Four, as many pundits predicted the Jayhawks would, the 2019-20 team’s total would have been closer to 250, vaulting this group into the top half of the Self era.

KU’s individual numbers are a little tougher to analyze because the roster changed so much from the 2018-19 season to 2019-20.

Gone were 3-point gunners Lagerald Vick and Quentin Grimes, who attempted and made the most 3-pointers on the team by a long shot during 2018-19.

That left the rest of the Jayhawks seeking to make up for the 120 combined makes on 304 combined attempts by Grimes and Vick from the season before. For what it’s worth, Grimes saw his percentage drop from 34% as a freshman at Kansas to 32.6% during his sophomore season at Houston. 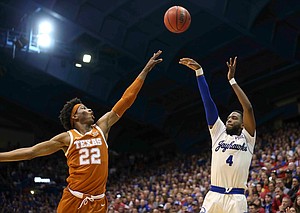 Kansas guard Isaiah Moss (4) puts a three over Texas forward Kai Jones (22) during the second half on Monday, Feb. 3, 2020 at Allen Fieldhouse. 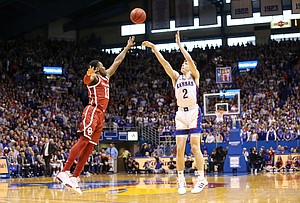 Kansas guard Christian Braun (2) hoists a three before Oklahoma guard De'Vion Harmon (11) during the first half on Saturday, Feb. 15, 2020 at Allen Fieldhouse.

Both had the green light to shoot throughout the season, and that duo finished as KU’s top two 3-point shooters by percentage with at least 100 attempts.

Freshman Christian Braun, who hit 32 of 72 from 3-point range in his first year at Kansas, led KU’s regulars with a 44.4% clip.

Moss, whom KU coach Bill Self consistently called KU’s best 3-point shooter, saw his percentage dip, from 42.1% as a junior at Iowa to 34.8% during his lone season at Kansas.

However, the change in system and adjusting to a new building, new teammates and new coaching likely had more to do with Moss’ lower percentage than the new 3-point distance.

Sophomore point guard Devon Dotson, who shouldered a lot of the load of trying to fill the void left by the departure of Grimes and Vick, also saw his percentage drop from 36.3% as a freshman to 30.9% during 2019-20.

Agbaji, who worked on fine-tuning his technique throughout the offseason, made twice as many 3-pointers in fewer than twice as many minutes.

And then there was the much-maligned Marcus Garrett, whose 3-point shooting woes have been a popular topic among fans throughout his KU career. 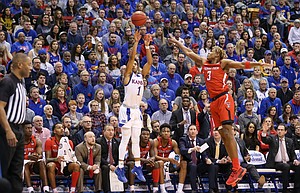 Garrett actually made the biggest jump as a 3-point shooter of any of KU’s returning players, improving from 24.5% as a sophomore to 32.7% as a junior.

Garrett said his entire summer workout before his junior season included NBA 3-pointers, and his numbers illustrated that the new distance did nothing to hurt his long-range shooting.

One other thing worth noting here is that KenPom’s numbers show that the percentage of 3-point attempts throughout the Division I ranks this season also fell from 38.7% to 37.5%, meaning teams were taking fewer 3-pointers on average across all of college basketball.

During the past few seasons, Self has started to embrace the direction the game is headed, with more wide-open offense and 3-point shooting from all five positions at all levels of basketball.

While Moss and Dotson will be gone when the 2020-21 season rolls around, Self added two players (Bryce Thompson and Latrell Jossell) in the 2020 recruiting class known for their ability to make shots and also will return 56.3% of the team’s 3-point shooting from the 2019-20 season.

That number is the highest it has been at Kansas since the 2017-18 season when KU returned 62.9% of its 3-point shooting.

It also marks the ninth time in Self’s 18 seasons at KU that the Jayhawks will return better than half of their 3-point shooting from the previous season.