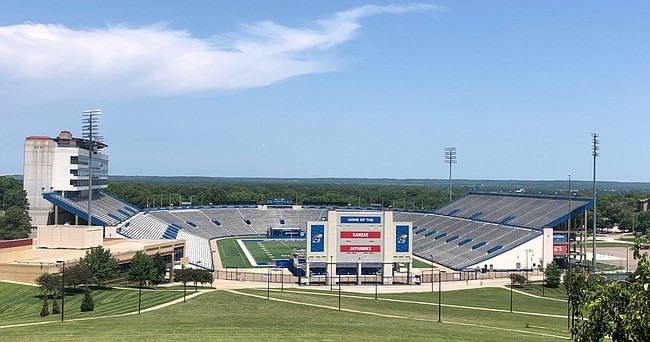 Although it took time to finalize the details, Kansas Athletic Director Jeff Long identified a replacement for New Hampshire on KU’s 2020 football schedule the same day that UNH pulled out.

Mere hours after UNH AD Marty Scarano informed Long that the Wildcats would not be competing in any fall sports this year, Long placed a call to Southern Illinois AD Liz Jarnigan.

Jarnigan was on the other line with another college administrator at the time, trying to find a replacement game for SIU’s Sept. 19 matchup with Wisconsin, which fell apart when the Big Ten canceled all nonconference games on July 9.

But she wasted no time in getting back to Long once she heard his message.

That sparked a week’s worth of back-and-forth discussions between KU and SIU administrators and ultimately led to a new season opener for both teams on Aug. 29 at David Booth Kansas Memorial Stadium.

“We both decided rather quickly that we mutually had great interest in getting a game with each other,” Jarnigan told the Journal-World during a Monday morning phone interview. “And we went to work fast and furious after that.”

Jarnigan said the negotiations that led to SIU taking New Hampshire’s place on KU’s schedule — albeit a week earlier — were nearly non-stop. In fact, she said KU officials even apologized for reaching out on a Saturday, the day after the initial call. But Jarnigan didn’t mind.

“There’s no rest during COVID,” she said, praising the work of both KU and SIU's compliance and sports information staffs for making the game possible.

While money was a motivating factor for both programs, Jarnigan said other elements created a sense of urgency.

“People talk about the finances and how important those buy games are to us,” she said. “And there’s no question about that. However, a more important reason for us to get this game back was for our kids. Our student-athletes deserve to have me work hard to try to find a replacement game for them.”

According to SIU’s news release announcing matchup, KU agreed to pay Southern Illinois $300,000 for the game. Once the two agreed on the financial terms, the rest of the time was spent ironing out the details.

“There was a lot of back and forth through the weekend, but we knew early on during the week that this is what we wanted to do,” Jarnigan said.

According to Jarnigan, the only thing that delayed the announcement to last Saturday was the NCAA’s approval of a waiver request — made by both schools — for a Week Zero game this season.

In the seven days between the Big Ten’s decision to play conference games only in 2020 and Long’s phone call, Jarnigan said SIU was "looking at all sorts of different options.”

She acknowledged that the 390-mile distance between KU and SIU’s campuses was beneficial, and added that playing on the road was not a concern.

“We lost a game that we were traveling to anyway, so that was not a bad thing for us,” she said.

Although the correspondence with KU was random, Jarnigan said SIU has ties to the Sunflower State.

She and her husband coached volleyball and football, respectively, at Bethel College in North Newton for five years. And the father of KU track and field assistant coach Paul Thornton was Jarnigan’s academic advisor at St. Olaf College in Minnesota when she was in school.

In addition, the 2020 SIU roster includes Peyton Reeves, a freshman defensive tackle from Basehor who played high school football at St. Thomas Aquinas, and a handful of players from Kansas junior colleges.

“We do have a really fond connection to Kansas and the people there,” she said.

With the KU-SIU game now on the docket — time and television details are still to come — the focus shifts to adhering to health and safety precautions so the two teams actually can play.

Practices for both programs are slated to begin Friday and Jarnigan classified her feelings about the chances of the Aug. 29 game happening as “100% hopeful.”

“I would be crazy to say I’m 100% confident, given all the news and all the chatter that’s out there right now,” she said. “But I think moving the start of the season up a week may actually give us a better chance, and it gives us the opportunity to demonstrate that this can work.”

On Monday, the MVFC Presidents Council put out a statement saying, "patience is warranted regarding any decision to modify the 2020 fall season."

The statement added that conference officials see "merit in delaying as long as there remains a possibility to provide a safe competitive opportunity for MVFC student-athletes."

Coming together to solve a mutual issue. I like it.

I'm hopeful that things continue, so that Aug 29 works out.

Sulukies thanks for working out the plan, we look forward to the matchup

To make $600k for the game so we can “pay” ourselves as much as our opponents, how many tickets need to be sold? I guess there would be other revenue and ticket prices can vary, but trying to get some idea of expectations.

I m thinking IF there is a season the NERVOUS NELLIES wont allow fans. The fear and panic have to continue.

Bee Bee, it's hard to believe that you can really be this much of an idiot. You seriously think there should be fans at games?????

Are you really that stupid, or are you just completely brainwashed???

Are you always inclined to call people stupid because they might have a different opinion than you?

When their opinion will likely lead to people's deaths, yes.

Historically, the means for overcoming coronavirus' and flus (swine, spanish, etc.) was to move towards a herd immunity. The herd immunity is what provides immunity even when everyone is unable to accept or process a vaccine. In addition, vaccines take several years to develop although the current program appears to be on pace to have one in about a year's time.

In order for this to occur, exposure actually creates a scenario of success, but only to those with healthy immune systems. Calling some one dumb, ignorant, or stupid is ignoring science and thought development on subjects.

In fact, many people are questioning whether social distancing is prolonging the virus' time and causing more deaths in the long run.

I never have professed to be a doctor and I don't know what the answers are. But a society that doesn't allow thoughts or development of ideas is devastating.

Remember, it appears that social distancing actually is causing more deaths in the long run. Kind of scary to think about how driving to this new norm, could actually be the thing that is causing devastation. It will be interesting to evaluate Sweden as many are seeing a second wave after lockdowns like the US, the Swedes had a slightly higher death rate, but with more than 40% infected and a growing impression that herd immunity will be reached, their peak has occurred and appears to be dropping.

Hypothesis are important and successes are gained after the assessment of these. You can't jump to the conclusion without the testing.

I think these buy games typically net the opponents somewhere in the $500,000 range (like SIU was getting from Wisconsin).

The biggest way KU can make money outside of fans and concessions, of course, is through whatever television contract(s) they have, and I think it's safe to say that KU's piece of the pie for that would be more than $300K for a single game, even after factoring in the costs of operations to host the game in the first place.

Last year, the Big 12 paid out more than $30 million per school in television money to its 10 members. I can't imagine it'll be that much this year, but they're trying to play as many games as possible to get as close to that number as possible by the end.

It's going to be an interesting ride...

If I recall roughly, we get about somewhere around $32mm for our football allocation on Big XII. If that is for all 12 games, then we are getting about $2.8MM pregame. If that is for just the Big Xii matchups that is about 3.5mm per game and we would get probably a little less for non-conference games.

My guess is that fox 1 has rights to this game and has an amount around that just for the TV rights and we will make 3x as much as the SIU on the game. Based on the Big Ten cancelling all non-conference and other considering the same. Content will be at a premium and any games that occur will be paid enough to cover the $600,000 to match the cost of what SIU is making.

Furthermore, I believe the separation of KU Athletics and the KU sports medicine set us up to be successful in this endeavor. I know there are risks, but the protocols put in place to begin practicing and the protocols for ongoing safety from the virus perspective, should be ample to see the first game of the season, likely with limited or no fans.

As time moves forward I think you will see some experimentation with limited fans and additional protocols for fans.

Well said, Jeff. Looks like we were responding at roughly the same time. It's a bit crazy out there still, but it is also interesting to follow given the unprecedented nature of trying to have sports during a global pandemic.

My guess we'll be lucky to get this game off the ground. But if we're able to, it's good to see two schools trying to make things work with all the insanity going around.

What a reasonable way to look at it! For what it's worth, I think they'll play the game. Things have to go well — and right — for the next four weeks, but it sounds to me like it's positioned for that to happen. Time will tell...

Bee Bee, unfortunately you are right, they most likely won’t allow fans in.....I mean after all, it only has a 99.5% survival rate. The flu kills more, but that doesn’t matter. Hey, wait a minute, everybody that wants to go, can go “in the name of rioting and protesting” and then it will be OK. CNN and MSNBC says so 😂😂😂😂😂😂😂😂

Matt, will you be doing a story on what Kansas (the football community) is going to do on field during the game for players and staff. Will all Kansas head gear be equipped with the clear face guards attached to the grill for instance? Separately, is Benton still on staff?

Good questions, Greg. We'll definitely have something on that.... when KU has something on that. I don't think they've figured out all of the details of the season by any means yet. They're still working on game day protocol, plans for fans (if any), etc. But we'll stay on it.

As for Benton, I'm happy (beyond happy!) to report that he'll be back with us on Monday after having been on furlough since early April.

I know he's ready to get back to work and writing and we're certainly ready to have him back, especially with the football season right around the corner.