At the midway point of Big 12 play, the Jayhawks have handled their business away from Allen Fieldhouse. With road wins at Iowa State, Oklahoma, Texas and Oklahoma State in January, they did their best to keep up with league-leading and now No. 1-ranked Baylor by winning on their opponents’ home courts every chance they got.

KU, of course, keeps going back home with victories because of its defense. In conference road games so far, the Jayhawks are limiting opponents to 53 points per game and 33.2% shooting from the field.

The secret to their success might be the failures some of KU’s current players endured a year ago. At least that’s the way starting point guard Devon Dotson sees it.

“We know we didn't get it done last year on the road,” Dotson said, “so I feel like each guy in the locker room, I feel like they're really locked in. Our road games, it means something. I guess it's personal.”

Dotson, Ochai Agbaji, David McCormack and Marcus Garrett all were around for KU’s road woes during the 2018-19 season, when the Jayhawks went 3-8 on the year in true road games and 3-6 in Big 12 road venues, putting an end to KU’s streak of 14 consecutive conference championships.

They’ve done far better away from home this season, taking a 5-1 mark overall and 4-0 Big 12 road record into Saturday’s game at TCU.

“You just try to emphasize staying together, staying locked in,” Dotson said of their road warriors mentality. “We tell each other, I tell the guys before the game, there's going be times when they make a run. We’ve got to just stay doing what we do. And stay together. So that's the big thing.”

The Jayhawks’ road game approach isn’t broken. No need for them to stray from what’s working. Their defense and toughness has traveled well, and helped KU stand out as one of the nation’s top teams.

With KU limiting its Big 12 foes to 28.7% from 3-point range through the first nine games, the Jayhawks will need a similar defensive effort at TCU.

“They’ve got some shooters,” Dotson said, “so we’ve got to know our personnel out there, know the scouting report, know who likes to do what. Just staying locked in on the game plan.”

TCU senior guard Desmond Bane is arguably the league’s best 3-point threat, leading the Big 12 with 2.8 makes a game. Bane (16 points per game) has drained four or more from deep in eight games, most recently going 6-for-8 versus Texas Tech on Jan. 21.

“Bane,” KU coach Bill Self said, “is probably as good a wing scorer as we have in our league. And they shoot a ton of 3s and, you know, they make their fair share of 3s, too.”

3. Win the battle of the bigs

TCU center Kevin Samuel hasn’t received the same type of attention as his counterpart at KU, Udoka Azubuike, but the Horned Frogs rely just as much on their 6-foot-11 sophomore as the Jayhawks do on their 7-foot senior.

“They're as much as we are playing four around one,” Self said of TCU coach Jamie Dixon using guards around Samuel. “And Kevin, I think is one of the best post players in our league. Without question, he has a really bright future.”

Over the past five games in particular, Samuel’s individual production has been impressive, even though the Frogs have dropped four games. The sophomore big man from Barbuda in that stretch averaged 13.4 points, 9.8 rebounds and 3.0 blocks, while making 68.3% of his shots.

The two basketball behemoths figure to go mano a mano inside any time their teammates can get them the ball. And if one of them is the clear winner of this big man battle by the end of the game, it’s a safe bet his team will leave victorious, too. 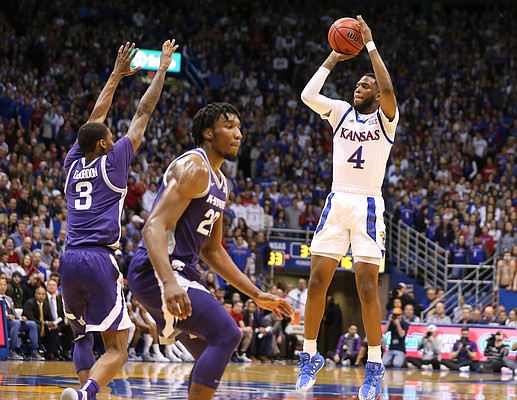 Kansas guard Isaiah Moss (4) pulls up for a three against Kansas State guard DaJuan Gordon (3) during the first half, Tuesday, Jan. 21, 2020 at Allen Fieldhouse. by Nick Krug

KU shooters vs. their 3-point slump

The 3-point arc hasn’t exactly been a reliable source of offense for the Jayhawks this season, what with them hitting just 34.5% from downtown on the year and that figure dipping to 32.3% in Big 12 games.

Lately, though, it seems to Self like those shots are falling even less often.

“When’s the last time we shot it well?” KU’s coach asked after his team went 2-for-12 in a Monday home win over Texas.

There was a 4-for-13 outing versus Texas Tech before that, and although the Jayhawks were a little better at Oklahoma State, going 11-for-33, Self doesn’t give that much weight considering one of those 3-pointers was a lob pass Agbaji accidentally threw in.

The Jayhawks have failed to eclipse 35% from 3-point range in six straight games, dating back to an 8-for-19 (42.1%) showing at Oklahoma.

The top marksman in KU’s rotation, senior Isaiah Moss, caught fire in that win at OU, going 6-for-11. Moss, who is 7-for-24 since, said the Jayhawks’ 3-pointers look better during practices, and they need to carry that over into their games.

“I don’t think we’ve been shooting the ball as well as we could be,” Moss admitted, “but all the guys, we’ve been in the gym. After practices, before practices guys are working on their shots. I have no doubt in my mind we’ll be better.”

Dotson (25-for-87, 28.7% on the season) also remains confident that the Jayhawks will prove to be more accurate from long range in the weeks ahead.

“Stats wise, we’re probably not there,” Dotson said. “But as the season goes on, anybody can get hot any game. We’re all great shooters. Just going into each game you don’t look at that stuff. You just go in and play the game and let the shots fall if they do. And if they don’t, just find a different way to win.”

That’s basically Self’s thinking on the matter as well.

“I know the lid’s going to come off. It just hasn’t come off yet,” Self said. “When it does, we’re going to be a much better offensive team. The one thing about it is I’m not going to worry about percentages, because I know if we defend and rebound we’ll have a chance to be in most games, for sure.”

The Jayhawks remain in hot pursuit of Big 12-leading and No. 1-ranked Baylor, and they know they can’t afford to slip up against lesser opponents if they want to start a new conference title streak for the program.

A KU loss at any point would give the Bears (20-1 overall, 9-0 Big 12), who already beat KU in Lawrence, a bigger cushion and clearer path to the league crown.

“You just don’t want to create more separation,” Self said, “because I can’t see them losing.”

KU’s head coach envisions it that way, because he thinks this year’s Baylor team is playing at a higher level during Big 12 action than even Texas Tech was a year ago — and that Red Raiders squad went all the way to the Final Four.

That’s the message Self, no doubt, is feeding his players, too. And it’s one that should keep them motivated and focused against a TCU team that has lost six of its last seven outings and enters the weekend ranked No. 79 in the country, according to KenPom.com.

Did we defend the arc against Texas or did they just have a bad shooting night? Seemed to me they took a lot of uncontested 3's that didn't go in.

We really haven’t gotten anything on the road yet (per Coach Self). The teams we’ve beaten are the bottom of the league. The second half of the season has the real road games.

Your listed numbers for Aubuike are far enough off that I should mention it. On the year he is averaging 12.6 ppg and 9.5 rpg not the 11.5 ppg and 7.3 rpg that you listed in the article.

As the "Holland Windmill" stated recently, Bill Self tells the players when you are open, shoot the ball!

Please educate me on Bill Self''s definition of "Open"? Based on my KU Fan experience, "open" means when you are "wide open" from behind the 3 point arc, let it fly!

Don’t bother with the outside bricks; just feed Udoka Azubuike and let him control the game.