David McCormack finally has some fun as KU rolls vs. Washburn

Kansas forward David McCormack (33) turns for a shot over Washburn forward Jonny Clausing (42) during the first half on Thursday, Dec. 3, 2020 at Allen Fieldhouse.

Junior forward David McCormack’s 17 points on Thursday made him the fourth different leading scorer in four games for seventh-ranked Kansas, which ran past Washburn, 89-54, in the home opener at Allen Fieldhouse.

In Game 1 it was Marcus Garrett with 22 points against Gonzaga. In Game 2 it was Christian Braun’s 30-point explosion against Saint Joseph’s. On Tuesday night, Jalen Wilson broke out with 23 points to help Kansas beat Kentucky.

And on Thursday, in front of about 100 family members of players and coaches, McCormack hit seven of the eight shots he attempted, including the first on an alley-oop to open the game, en route to a 17-point night that he badly needed. 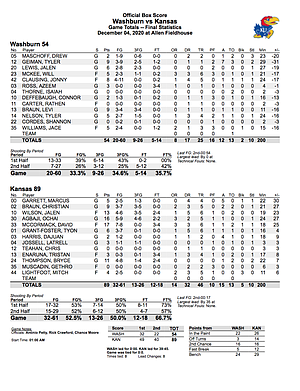 “He was better,” Kansas coach Bill Self said of his starting big man. “I still think he can do a lot better job with his balance and stuff, but he was good tonight. They were real baskets that he got tonight.”

Like it is every game, getting the ball to McCormack early and often was the game plan for the Jayhawks (3-1) on Thursday night.

Freshman guard Bryce Thompson said Self continues to emphasize that in practice and film sessions and many of McCormack’s teammates will say they take pride in finding a way to get him going.

But during KU’s first three games that wasn’t happening. McCormack shot 6-of-24 from the floor and turned it over nine times.

It did on Thursday. And McCormack’s obvious size advantage played a part in that. But the junior forward said after the game that his mental approach did as well.

“I know that I’m harder on myself than anybody else is,” McCormack said. “I think it just came down to putting pressure on myself. I know I just need to have fun and take the pressure off the game and enjoy everything that’s going on.”

Is that what happened Thursday against Washburn? 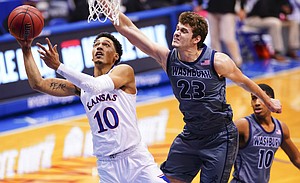 “Tonight was definitely fun,” he said. “I just enjoyed playing with my team, forgot about everything else and just had a good time.”

In addition to his solid night shooting the ball, McCormack grabbed six rebounds and a block, all in just 18 minutes on the floor.

“I think it was definitely big for me,” he said of playing well against the Division II Ichabods, who did not have to count the game on their season record and remain 3-0.

Added Thompson: “He came out first play of the game and set the tone with the big lob. He was everywhere tonight. He was big and we’re going to need that from him going forward.”

McCormack, who also flushed another alley-oop lob in the early going, was just one of four Jayhawks in double figures on Thursday night, and Kansas hit 13 of 26 3-pointers, with Ochai Agbaji (4-of-6, 16 points), Jalen Wilson (3-of-5, 13 points) and Christian Braun (3-of-5, 9 points) combining for 10 of them.

“When (Jalen) and Christian and Och are shooting the ball like they shot tonight, it adds a whole new dimension for us,” Self said.

KU shot 52% for the night overall and held Washburn to 33% shooting.

Thursday’s win in their home opener marked the 48th consecutive season that Kansas had won its first game of the season in Allen Fieldhouse, dating back to the 1973-74 season.

Most of those had 16,300 fans there to watch and celebrate the outcome. In this one, however, because of ongoing concerns about the COVID-19 pandemic, only family members of players and staff were allowed in the building.

That made for a strange experience, even by 2020 standards.

“It was definitely different, not what I was used to,” Thompson said after his first career game in KU’s historic home building. “You know, I came to Late Night and saw all the fans.”

Added Self, when asked what he thought of Thursday’s setting: “I thought that it was not great by any stretch. But the atmosphere here was 10 times better than it was in Indy (on Tuesday vs. Kentucky). In Indy there was none at all. At least we had some cutouts and had a couple people in here, so that that was a positive. But, yeah, it's not the same. It’s certainly different. But it was just good to play and it's good to play in the Fieldhouse and shoot on some rims that we’re a little bit more comfortable with.”

Next up, Kansas will return to Allen Fieldhouse on Saturday to take on North Dakota State (0-3) in another game with family members only in the stands. Tipoff is slated for 3 p.m.

Prior to Thursday’s game, KU officials announced that fans would be allowed back into Allen Fieldhouse for men’s and women’s games on a limited capacity basis the week of Dec. 7-14.

Bill Self recaps KU's win over Washburn by KUsports.com

David McCormack on bouncing back vs Washburn by KUsports.com

"... the Division II Ichabods, who did not have to count the game on their season record and remain 3-0."

WTF????? I understand they're in different divisions, but since when is a team not allowed to count ANY loss on its record???

Goes to show that Kansas still has a massive homecourt advantage even in the midst of our so-called "leaders" overreacting to a pandemic.

I think the win had more to do with talent differential than with how many fans are in the stands.

I'm not sure if you're being serious. But considering Washburn is only 30 minutes down the road, and there were no fans in attendance, I'm not sure Allen Fieldhouse awed the opposing team as much as usual.

As for the "leaders", I believe the NCAA and school administrations are simply making business decisions. They are doing what is in the best interest of the bottom line. That's why we see things that make no sense, like coach's "wearing" masks. As long as it appears they are taking this 'seriously' the likely can continue to play games and make money. It's about optics at this point and appeasing the various stakeholders. Keep in mind that there are many people out there, people who are your neighbors, who wear a mask when driving alone in their own car.

I pointed out the same thing in a comment on here after their last game.

You are awarded one internet point as credit.

*What kind of world do we live in where a game is an exhibition for one team, but regular season for another? Is this the final plague of 2020?

*Cardboard cut-outs in the stands are creepy. It puts off dystopian vibes while doing nothing for the atmosphere. Duke, at least, had much better looking cut-outs of the crazies.

*Lightfoot looks like he has put on some muscle.

*Why are the coach's and staff wearing masks again? Honest question. Aren't they all in the same bubble and tested multiple times a week? And of all the college basketball games I've watched, they only wear it part-time anyway. It reeks of security-theater.

*Why does no one on KU have a beard? Several Washburn players had them and I think it helped their game.

*I am in favor of ESPN+, but it was pretty low quality last night. One announcer's volume was significantly lower than the other and the stream had issues.

We noticed the volume thing, too. I suspect they announcers were in different locations, not in the arena, and thus microphone differences account for the volume problems.

That was my guess as well. That, along with the empty fieldhouse, made the game feel exceedingly dead.

half the time when the coaches are actually talking in the huddle their masks are half falling off anyway.

But they "have to set a good example for the public"

Right. And a team is its own bubble, including the coaching staff. Notwithstanding the fact that when teams play, they essentially merge bubbles. They are, after all, all touching the same sweaty basketball, ect.