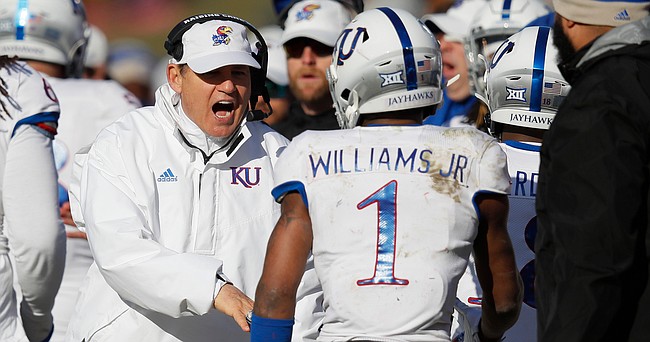 Sources telling SoonerScoop's @CareyAMurdock and @Eddie_Rado Big 12 presidents will allow conference to move forward toward a season and a revised Big 12 schedule will be released after approval from AD's during tonight's meetings.

Source: The Big 12 Presidents are wrapping up their call. The league is going to continue to pursue playing this season. A schedule, which was already prepared, will be released in the near future. This confirms what our @rivals friends at @SoonerScoop reported.

Told the Big 12 board of directors have gone into an executive session but feeling is league will continue pursuing a season, as @SoonerScoop first reported. ADs are meeting at 8 p.m.

None by Drew Davison

Before their presidents OK'ed to continue the season, Big 12 ADs got briefed for 90 minutes tonight by a medical panel, which led to vigorous debate.

None by Ross Dellenger

THE JAYHAWKS ARE GOING TO BE BOWL-ELIGIBLE!

I've never been more ashamed and embarrassed to be a fan of the Big XII.

The Pac-12 and Bit 10 have it right, and anyone who doesn't see that is crazy.

So everybody shares YOUR opinion or they're crazy? Nice. Enjoy your closet.

Ashamed and embarrassed because the league wants to play football? Seems a bit of an overreaction; but we do live in a culture of over the top social media reactions and cancel culture, so I can see that.

Still early. Won't be surprised if the BXII follows suit.

Give it up already. There is no way anyone is playing football this fall.

So in March we couldn't have a college basketball tournament (even without fans). But in August we can have football games. I'm just asking what has changed since March that has impacted our thought process? We have no vaccine. The number of new cases (especially in the Midwest) is higher. We have more testing available. But do we need more athletic teams using up limited resources of testing with faster results? The MLB and NBA can't seem to go a week without new cases popping up despite all their resources and a much smaller group of people per team than college football.

Would there even be a true BCS champion with only three of the five power conferences participating? I love college football. But what is happening with the NCAA and it's student first priority?

This whole thing has become so political it is a shame. We have an election coming up and too many decisions being made based on giving the allusion that we have everything under control. I don't know what the right answer is. I just know the only thing to me that has really changed since March is our level of patience.

We have to stop living in fear. We need to go on living and stop strangling ourselves.

That's the problem. We never did stop living. If you look at the countries that have gotten this under control, they had to resort to a total lockdown for several weeks. That was it. We sorta kinda had a suggested social distancing program that many states considered optional. Then once we started seeing limited success we decided to open everything back up.

There are 250,000 bikers gathered in Sturgis, SD while football is being cancelled. It's that kind of irresponsible disregard for this virus that will ultimately deprive us college football fans of our season.

ITS A VIRUS......LIKE THE FLU. Immunization doesn’t stop the flu and it won’t stop this. Latest numbers from the CDC has a death rate at 0.4%. WOW. Let’s shut the USA down. Suicide, overdoses, and pedophilia is up HUGE. Businesses are tanking, no jobs, depression, are at all time highs....but hey, that 0.4% rate is too high. What a bunch of wussies. How about you scaredy cats stay in the basement. When you come out in 6 months, the virus will still be alive and well. ITS A VIRUS. Herd immunity is the answer

That's GENIUS, especially now that we're seeing that even very young people are having adverse heart, lung, kidney, and brain disorders that may never be corrected. It's impossible to quantify the long term health care cost but what the heck. Herd immunity is the answer!

Herd immunity will require approx. 75% of US citizens to contract Covid. That will likely take 2-3 years and will lead to nearly a million unnecessary deaths.

2,977 people died during the 9/11 attacks and we went into a full blown war over in the sandbox. That many people are dying every other day and "it is what it is". Why aren't we mounting a battle against the virus like we would against a material enemy?

I have no fear of getting this virus myself, but myself and my kids haven't been able to visit my mom in over a year, because as a recent cancer survivor Covid could potentially put my mom in the hospital or worse.

Attitudes like this are the reason the US has only 4% of the world's population but 22% of the deaths from Covid 19. We must be doing a great job! And using a CDC death rate of 0.4% when they have no way of backing that number up is ridiculous. And just to be clear, you would be okay with the deaths of 1.3 million Americans because you are a tough guy and we are all wussies.

It is simple math., 5.1 million confirmed cases have resulted in 165K deaths so far. That is 3.25%. So following your logic, once all 331 million Americans have had Covid 19, we will celebrate stopping the virus as we bury 11.3 million Americans.

@James. Not sure where you are getting your math. All deaths are “unnecessary” as you say. Based upon some of the posts, we need to get rid of all tobacco and alcohol and every fast food restaurant, as they cause unnecessary deaths. While we are at it, get rid of all junk food and sodas in the grocery store. Also, no more vehicles......too many unnecessary deaths in car wrecks......we all take risks every single day. The at risk need to take extra precaution. They will need to take extra precaution fir the next several years, no matter what we do.

@Charlie. As far as the total lockdown for the countries that “have it under control”, the governor of South Dakota would like you to hold her beer 🍺

Steven, your gish gallop, strawman argument may sound great while drinkin' at the bar in South Dakota, but allowing yourself to be distracted from solving the Covid problem instead of choosing to ignore it would be much more productive while things are circling the toilet.

Lawrence is a party town with a large campus, near KC, it's not Sioux Falls and this virus spreads much easier then most others; most of the kids won't even know they have it, but some will have long term health issues as a result.

Everyone should be able to agree that we need to work toward solutions that allow for normal activities, while keeping all our citizens safe, if we can at least agree on that simple point, I think that would be more helpful for everyone in the country right now.

Somewhat humorous how you make the comparison of fast food, tobacco, and alcohol to Covid 19. See Steven those are personal preferences that are not contagious to others. The last time I checked you couldn't smoke in public places and you can't walk down the street with a beer or drink in your hand. Yet requiring a mask in public places in close proximity to others I'm sure you feel is a violation of your constitutional rights.

I'm sure we'll just have to agree to disagree on this subject. It just seems unfortunate that the more people we have with your attitude, the LESS rights we'll have for a very long time.

Research bioethicists like Dr Fauci’s wife. It’s the culling of the unproductive population. Not my idea, but one they have been promoting for the past century.

If you’re fat and smoke you dramatically increase your chance of dieing from CV. At least ten fold. If you stay inside out of the sunshine, you will decrease your vitamin D levels and increase your chance of dieing 100 fold. Vaccines are a 50/50 coin flip of effectiveness. They will tell you it needs to be renewed regularly (annually?) but likely won’t tell you about the health risk. Masks might also be 50% effective but no one really knows because there is no standard for how they’re made.

Hate on me all you want. These are just the facts of our day.

I’m honored to be engaging in conversation with so many people with PHD’s. Talking all these long term effects, with ZERO proof.

@Steven. I was born on a Army base in Stuttgart and spent 13 years on bases from Ft Riley to Heidelberg.

Everyone prefers to not wear a mask and everyone wants to go outside, you are presenting strawman argument. You are correct sir, it is your right to go into public spaces without wearing a mask, potentially putting others at risk, especially the immunocompromised and elderly. It is also the right of others to find such behavior extremely disrespectful, especially to immunocompromised or elderly individuals.

@James. I can’t remember the last time I was in a crowded place. I don’t get out much. Don’t like crowds. If I did need to go to a crowded place, then yes, I would wear a mask. Everywhere I go, I can maintain social distancing. Should have mentioned that. Me personally, the kneeling during our great National Anthem is 1,000 times more disrespectful than not wearing a mask, but that’s just me. We sure do live in a diverse country these days.