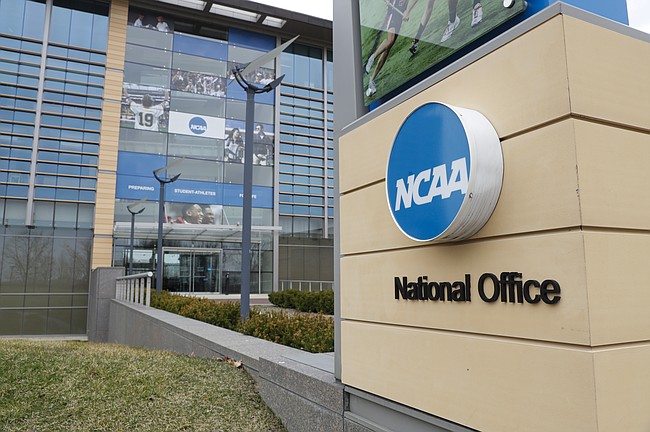 Recommended rule changes that would clear the way for athletes to earn money from their names, images and likeness are being reviewed by college sports administrators this week before being sent to the NCAA Board of Governors, which meets Monday and Tuesday.

If adopted, the rules would allow athletes to make sponsorship and endorsement deals with all kinds of companies and third parties, from car dealerships to concert promoters to pizza shops, according to a person who has reviewed the recommendations. The person spoke to The Associated Press on condition of anonymity Thursday because the details were still being discussed and debated.

Last fall, Kansas basketball coach Bill Self and KU football coach Les Miles were asked about the idea of athletes profiting from their likenesses and images after California passed a law making such moves legal. Neither coach said he was against it.

"I mean, you’ll have student-athletes doing every barbecue commercial, every dry cleaning commercial, car commercials," said Self in an interview with 610 Sports Radio after the California law passed. "You’ll have them doing all this stuff in a way to generate money, which I’m not saying is wrong in theory, I just think it’s going to be the wild, wild west in a way that we’ve never seen before.”

Asked about the California law during one of his weekly press conferences last season, Miles said KU's standing as a top-tier academic and athletic university in the middle of the country would leave KU in a good position if sweeping changes were made.

The recommendations are expected to form the foundation for legislation the NCAA hopes to pass next January so it can take effect in 2021. Changes could still be made before January.

No school-branded apparel or material could be used by athletes in their personal endorsement deals, according to the recommendations reviewed by the person who spoke to the AP. Athletes would be required to disclose financial terms of contracts to their athletic departments, along with their relationships with any individuals involved.

Athletes would be allowed to enter into agreements with individuals deemed to be school boosters, the person said.

The NCAA would create a mechanism to evaluate potential deals for fair market value and spot possible corruption. An athlete could compromise their eligibility for failing to disclose details of a financial agreement or relationship, the person said.

The recommendations also call for allowing athletes to sign autographs for money, sell their memorabilia, and be paid for personal appearances and working as an instructor in their sport.

“Trevor Lawrence could have his own passing academy,” the person said, referring to the Clemson quarterback.

The recommendations come from a working group set up 11 months ago and led by Ohio State athletic director Gene Smith and Big East Commissioner Val Ackerman.

The need for change was sped up by pressure from state lawmakers. California was first to enact a law that would make it illegal for NCAA schools to prohibit college athletes from making money on endorsements, social media advertising and other activities tied to name, image and likeness.

NCAA leaders have gone to Congress looking for help to fend of a patchwork of state laws and create a national standard.

In one way, the recommendations go even beyond the free-market approach of the California law, which would restrict athletes from making sponsorship deals with companies that conflict with a school's existing business relationship. For example, an athlete could not sign a deal with Nike if the school had a contract with Under Armour.

The working group's recommendations would keep the NCAA out of that decision, leaving it to each school to decide whether it will allow an athlete to sponsor a competing brand, the person told the AP.

Wild west for sure. The All-stars will do fine.
Unfortunately, most athletes are not going to be able to benefit from this. It will be the 'stars' who are famous who will be able to make some, or maybe a LOT of money from this. And all the smaller colleges? Good luck there.

I got a idea, LET THEM GO TO THE NBA STRAIGHT FROM HIGH SCHOOL!!

I agree. If they are just in it for themselves and it is all about the money then they should be able to just go straight to the pros. In essence they are anyway if they are getting paid because of their athletic abilities.This will make the schools (or boosters) with the most money be able to just buy the best players every year. It will be the same two or three schools vying for the national championship every year and everyone else will be like the minor leagues. The "fair market value" part of these recommendations will be a joke. It would be way to hard to enforce and would cost way to much in legal fees when the institutions or NCAA are sued over their interpretation of the "fair market value".

That's the answer.. It wouldn't bother me a bit and make college sports better imo.

This is an NBA rule, not an NCAA rule. The NBA will likely allow this when the next collective bargaining agreement is done.

well, if the NCAA is going to let athletes sign contracts with boosters, as this indicates, this should be the end of the NCAA's case against KU. That whole thing was a joke.

So does that mean that - all other things being equal - projected OAD's or 2-year players with the potential to reap benefits from endorsements will be signing with schools like Florida or Florida State, rather than for instance San Diego State or UCLA?

Wouldn't these differing dates affect recruiting (and signings) in a big way for the next couple of years?

Finally. Lots of questions. Can an athlete sign a deal with an existing school sponsor? For example, could a KU player ink an independent deal with Adidas? Would this decision have any impact on the current KU/NCAA situation?