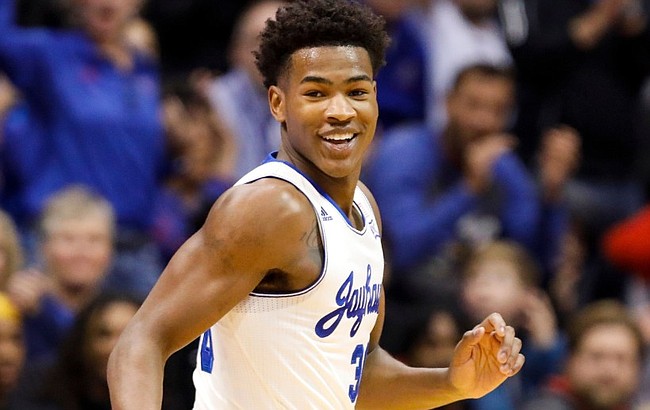 After two seasons as a role player and underclassman, Kansas guard Ochai Agbaji is eager to see what life is like as one of the Jayhawks’ most experienced players.

That’s why the 6-foot-5 guard from Kansas City, Mo., is planning to return to KU for his junior season instead of testing the waters of the NBA ahead of the 2020 draft.

Agbaji announced his decision just after noon on Tuesday, saying "we have some unfinished business to take care of," during a video announcement on Twitter.

"With that being said, I will be returning for my junior season," he added, before signing off with a "Rock Chalk."

After breaking onto the scene midway through his freshman season as an initial redshirt player, Agbaji has become a fixture in the Jayhawks’ lineup.

He started 16 of 21 games during his first season in Lawrence and was in the starting lineup for all 31 games of his sophomore season in which KU finished 28-3 overall and 17-1 in Big 12 play while bringing the Big 12 title back to KU. 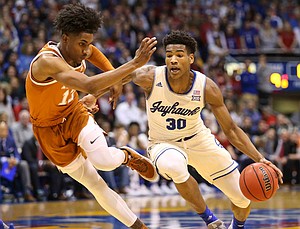 Kansas guard Ochai Agbaji (30) drives against Texas guard Jase Febres (13) during the first half on Monday, Feb. 3, 2020 at Allen Fieldhouse.

Early in his KU career, Agbaji began showing up on NBA mock drafts with regularity. His 6-foot-5 frame, elite athleticism and versatility on offense and defense make him an attractive option for talent evaluators at the next level.

But a sluggish finish to Year 1 and an inconsistent second season on the offensive end have left Agbaji with some work to do in terms of polishing his game for a shot at pro ball.

“I looked into the NBA and was given some great feedback on ways I can be a better basketball player,” Agbaji said in a news release after his announcement. "I know there are a lot of areas of my game I can improve and look forward to working with our coaches to reach that next level."

Prior to Agbaji announcing his decision to stay in school, ESPN.com draft analyst Jonathan Givony ranked him as the No. 85 overall prospect in the 2020 draft class. He also was listed as the No. 12 small forward in the 2020 class.

Returning to Kansas and taking on a bigger role during the 2020-21 season — as both a scorer and a leader — should pave the way for him to improve on both of those rankings.

“I believe Ochai could have been drafted but there are some things he knows he still needs to improve on,” KU coach Bill Self said in the release. “He has taken a very mature approach to this. I believe Ochai is an NBA player and with a great year next season, hopefully he’ll put himself in a position to do that.”

We’ve got some unfinished business Jayhawk Nation! Time to get back to work! #RCJH pic.twitter.com/LdxgmLcyz5

And this is a surprise how?

Surprise or not, it's good to have him back!

The ability and potential is there......the consistency is not.

A wise decision and, my guess, he may need the full four years. Probably test the waters after next season, but the input will be to stay. Like Dale, I'm glad to have him back.

PS One of the best smiles in KU history!!

Excellent...this is a key figure for stability and leadership. I'm getting more excited about their chances of repeating as the #1 team in the country.

There's about 40 points pg, or so, that KU will be missing from this past season. Good chance Ochai eats up 8-9 of that. McCormack most likely has a big junior season as well.

I agree, though 8-9 pts seems a little optimistic to me. I can easily see him averaging 15 ppg next year. 18 ppg would be a surprise to me.

I'd say that he and Garrett probably both up their averages by 5 or so points, McCormack by up to 10 pts, and don't forget about Jalen Wilson.

He's is a fine young man, but NBA after the past year, no way. I doubt he will even lead our team in scoring next year. Not saying the leading scorer always gets to the NBA, but there are alot of guys his size all over the country. I think we often think more highly of our own players, since we see them alot, than some of the studs on all the other teams across the country. Ochai just disappeared far too often this year in some games. He needs to be all in, every game, to get to the next level.

Article could of been written about every player with eligibility left, not sure why anyone thought there was a closed door decision on this?

It's a new world Adam. It's become a tradition in the past 5 years or so for star players to make an announcement video via social media if they are returning for the next year. The students on campus don't have the years of watching players make this decision as most of the commenters on this page. And they get really excited about these returning player announcements. So it actually is news to an important chunk of the KU fan base.

Like you, I find this to be no surprise. And yes the KUSports.com editors have articles already written and ready to publish for guys like Garrett, De Sousa, McCormack

I have no idea why the Jay Villas’ of the world think he’s an early to mid 2nd round pick. Returning is absolutely the correct decision.

Where in hell was he gonna go? He had a mediocre season at best. He never reached the expectations that came from his first few games last year. Lots of work left to do. Otherwise, I love the kid.

Welcome back! He is poised to have a big Jr. year

There should be lots of competition for minutes next year, whether it be in the form of Coach wanting to use 2 bigs and reducing the wing minutes or just the abundance of wings. Ochai probably has a slight advantage in that he seems to be one of the players that knows and does all the little things Coach wants. All the things that it has been fascinating to hear him discuss in his video review of games the past month. Marcus does as well, and Prison Mitch is back for his 5th year. It’s going to be a great year!

maybe his playing style is that of a prison brawler? Maybe his advanced age and wisdom is like that of Red from Shawshank Redemption? Maybe it's just ironic because of Mitch's clean cut, prim and proper appearance?

I think sometimes as fans, some of y'all don't understand that all 5 guys on the floor can't be "the guy". Doke and Dot were our guys this year and other than a game here or there, because of the way this team played together and was built..... Ochai wasn't needed to carry a big scoring load. His job was to make the hustle plays and play defense. Did you notice often times if Garrett wasn't on the floor he had to defend their scorers? Even when Garrett was on the floor Ochai still normally guarded one of their better players. Did you notice how many sets were run for him to score the ball? (Hint: not many) They were normally inbounds lob plays when they were specifically for him. Did you notice that regardless of his stats he still was almost always on the floor when it mattered? Stats are fun to look at but don't always tell the story. Ochai is better than some of you think he is. If you can't see it, then you're not paying attention.