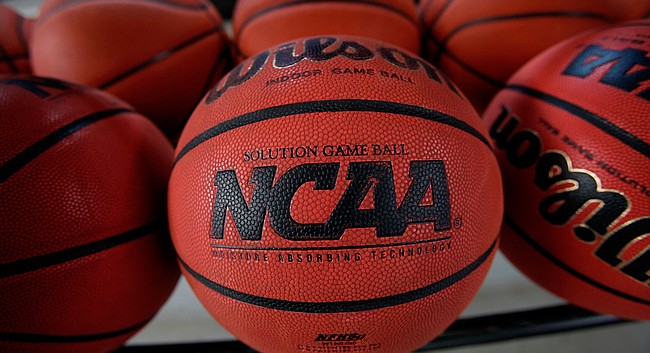 California’s decision to allow college athletes to make money through endorsements could lead to many other states following in its footsteps.

But Kansas likely won’t be one of them, said state Rep. Jim Ward, D-Wichita.

“The Legislature — in my 20 years there — tends to defer to the NCAA, for better or for worse,” he said.

On Friday, California's Democratic Governor Gavin Newsom signed a bill into law allowing college athletes to make money off their images, names or likenesses, through endorsement deals with companies, such as Adidas and Nike. The law directly contradicts the NCAA’s rules, which generally bars college athletes from accepting compensation outside of the scholarship they receive to attend college.

Ward, who supports California’s law, said the NCAA’s policies prohibit athletes from earning a wage that is fair compared to the amount of profit universities make off of their labor. He said the policies also have an equity issue because coaches can have endorsement contracts with companies while athletes cannot.

“There is a serious problem here,” Ward said. "I think the NCAA is 10 years behind the curve and they are harming these student athletes."

California’s new law, which goes into effect in 2023, is the first of its kind in the country. But Newsom said he expects other states to follow. Two lawmakers in South Carolina already announced their intention to do so.

Ward said a bill could be filed in Kansas and it may receive a hearing, but he said it’s doubtful it would get any further than that.

"I need 62 more votes in the House and 21 in the Senate and a governor to sign a bill like that," he said, referring to the majority needed in each chamber to pass a bill.

With California’s action, Ward said he hopes it leads to the NCAA reconsidering its views on amateurism in college athletics and trigger a change.

In the meantime, the NCAA said the bill is creating confusion for college athletes. The organization said other states passing similar laws will lead to an unfair playing field for the NCAA’s institutions.

“As a membership organization, the NCAA agrees changes are needed to continue to support student-athletes, but improvement needs to happen on a national level through the NCAA’s rules-making process,” the NCAA said in a statement. “Unfortunately, this new law already is creating confusion for current and future student-athletes, coaches, administrators and campuses, and not just in California.

“We will consider next steps in California while our members move forward with ongoing efforts to make adjustments to NCAA name, image and likeness rules that are both realistic in modern society and tied to higher education,” the organization added.

Bob Bowlsby, commissioner of the Big 12 Conference, said in a statement emailed to the Journal-World that California’s law creates instability in college athletics.

“The schools in our conference and those throughout the United States seek national recruiting and national competitive environment that can only be accomplished with fair and uniform rules and policies,” he said. “The passage of (the law) will negatively impact the universities in California and will undermine the unique American collegiate model that has been an enormous source of opportunity for millions of young student-athletes and many millions of fans.”

University of Kansas officials did not respond to the Journal-World’s request for comment. The only person affiliated with the university to discuss the issue so far was KU football coach Les Miles.

Miles said during his weekly news conference on Monday that California’s law could provide a recruiting advantage over schools in states where endorsement money is not allowed, such as Kansas.

I don't agree with Mr. Ward and in fact I roll my eyes at the statement today's college athletes are being harmed by the NCAA, no one is forcing these students to play college athletics and if they feel it is not fair or they are being exploited then don't play sports. I have three children at KU currently and they will all graduate with at least five figure debt which none of these college athletes will. Having said all of this, I have no problem with CA new law and if the NCAA adopted it I don't believe western civilization will come to and end, this stuff has been going on under the table forever.

Everyone defers to the NCAA for better or worse. Let's see what happens if states follow suit and join California.

"But Miles said the KU program would still be able to compete in recruiting of athletes because of its quality of education and its campus." lolololololol

Pretty sure when KU (and KSU) cannot get any quality recruits because players can make money off their image elsewhere, lawmakers will consider a change.

I don't get it. If the NCAA laws don't allow a student athlete to be compensated in this way, then how can those California schools remain in the NCAA? Wouldn't that mean they have to go do their own thing, and not be included in things like, say, the NCAA men's basketball tournament?

College isn't a place to make money as a professional when you're right out of high school, but that is not the point of the NCAA rules. It is to make the various sports competitive and marketable towards students, alumni, and fans in general. It is a big mistake to allow players at this level make money off endorsements, even though with our high profile basketball program we would benefit from it. These kids are in college often to get a little extra size and some honing of their craft to take it to the next level, professional sports. The NCAA needs to stand its ground on this and not give in or college sports as we know it is over. It is a bad idea at this level. The NCAA needs to change its rules so that kids, once they sign the letter of intent to a 4 year school will have to stay in school for 4 years. So many leave for the draft, but then don't make it to the big show. Then they don't have anything to fall back on. The purpose of college is to get an education.

So, most of you think paying an athlete thru endorsements is ok.

Here's how it will work:

Coach walks into the living room of the high schooler and says, "We got an endorsement deal just for you. Your numbered jersey, shoes, all kinds of sporting gear and we'll guarantee that we can sell 50,000 of them in the first year. Your take alone would be $1.5M. Then you'll hire an agent to over-see photo shoots of you modelling all kinds of apparel, not just sporting. The agent will create an Instagram layout with department stores like Dicks and Sports Academy, to name just a few, as advertisers for the stuff. Every click from your Instagram and subsequent purchase is commission dollars into your personal account. You do well your freshman year and the numbers go crazy!"

So this coach has a rich donor or two or three who is ready to buy that merchandise. No longer does the money pass under the table or in an envelope or show up in a driveway.

So, you think some athletes are in this "college" game for themselves now? Just wait, you ain't seen nothing yet.

Lickin' your chops for this gig?

This is the end of college athletics as we know it. You can thank the wonderful Democrats in Sacramento for this and other insanity we are dealing with out here.

I hate to defend either party since both are so flawed but the measure passed by a unanimous vote in the state assembly and senate so unless you’re into really bizarre conspiracy theories you can blame republicans as well.

Dane, you need to run for office...such common sense thinking is absent from both parties, :)

Thanks Tony but I can assure you that won’t happen. But, if it did my first order of business would be to eliminate corporate and special interest donations to members of congress. Tired of seeing lobbyists buying votes.