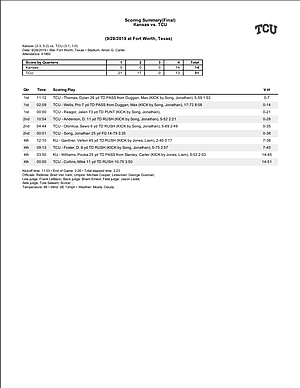 Do we have an offensive line? If we do you could’ve fooled me. It looked like they stayed on the tarmac. If they were out there I’d hang my head in shame for that performance. Pathetic. We were NEVER competitive, period.

It didn’t look like there were very many power five players on our side of the ball. Les has A LOT of recruiting to do. If you doubt it can it happen, Google Washington State’s first few years under Mike Leach... baby steps, baby steps!

Same offensive line as last year. But they played better and were more competitive under Beatty.

Forget this one, onto next week (next week maybe even worse) but we all knew that there would be games like this as much as we hoped there wouldn't be. After BC game we all thought things would be different but it's year 1 under Miles.

This is the type of loss that troubles me most. How do you maintain any degree of confidence going forth when you get blown out of the water and the game is essentially over after the first quarter. If it was against Alabama I’d feel pretty good about this game but against TCU, no so much.

That was an A whupping. TCU just physically manhandled us in all phases of the game. I can't count the number of times we had their runner about to be locked up behind the line and even with 3-4 defenders flying at him, he'd get a 5-6 yard gain. I'm hopeful the rest of the conference is not as overpowering.

That's what caught my attention too. They kept getting good yardage after the initial point of contact. We were getting to them but were unable to wrap them up.

also thought it was cheesy by TCU to take the time out with under 10 seconds in the game so they could punch in another score. well, that is the least of our worries.

Kevin and Mike said it best. TCU got embarrassed last week and came in hyper-motivated. We were down our best defensive player and a significant offensive skill player. We have a small roster and it’s going to take at least three years to fill gaps when the inevitable injuries occur.

We have to keep grinding.