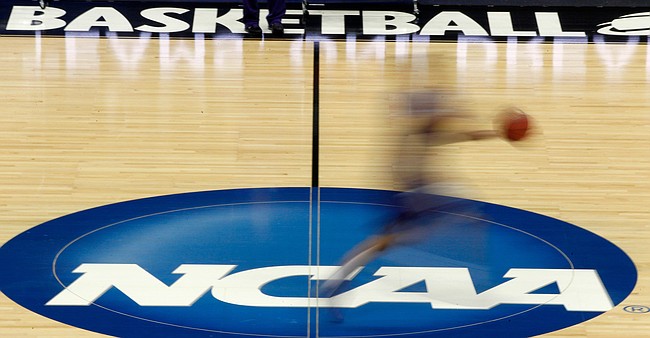 The NCAA took a major step Tuesday toward allowing college athletes to cash in on their fame, voting to permit them to "benefit from the use of their name, image and likeness."

The nation's largest governing body for college sports and its member schools now must figure out how to allow athletes to profit — something they have fought against doing for years — while still maintaining rules regarding amateurism. The NCAA Board of Governors, meeting at Emory University in Atlanta, directed each of the NCAA's three divisions to create the necessary new rules immediately and have them in place no later than January 2021.

Board chair Michael Drake, the president of Ohio State University, said the NCAA must embrace change and modernize "to provide the best possible experience for college athletes."

But such changes will come with limitations, he said.

"The board is emphasizing that change must be consistent with the values of college sports and higher education and not turn student-athletes into employees of institutions," Drake told The Associated Press.

A group of NCAA administrators has been exploring since May the ways in which athletes could be allowed to receive compensation for the use of their names, images and likenesses. The working group, led by Ohio State athletic director Gene Smith and Big East Commissioner Val Ackerman, presented a status report Tuesday to the university presidents who make up the Board of Governors.

Smith and Ackerman's group laid out principles and guidelines, endorsed by the board, to be followed as NCAA members go about crafting new rules and tweaking existing ones, including:

Some college sports leaders fear allowing athletes to earn outside income could open the door to corruption.

"One of the most distinctive things about college sports is this whole recruitment process," NCAA President Mark Emmert told the AP. "The whole notion of trying to maintain as fair a playing field as you can is really central to all this. And using sponsorship arrangements, in one way or another, as recruiting inducements is something everybody is deeply concerned about."

Ackerman and Smith said the challenges lie in determining what regulations need to be set in place; what markets athletes should be allowed to access; what entities and individuals they should be permitted to work with; and whether the schools themselves could provide funds to athletes through licensing deals.

The NCAA's change of heart came a month after California passed a law that would make it illegal for NCAA schools to prohibit college athletes from making money on endorsements, autograph signings and social media advertising, among other activities. California SB 206 goes into effect in 2023. More than a dozen states have followed with similar legislation, some of which could be on the books as soon as next year.

"This is another attempt by the NCAA at stalling on this issue," said Ramogi Huma, executive director of the National College Players Association, an advocacy group. Huma said the association has posted model legislation on its website that it is encouraging "all states" to pass "to ensure their college athletes are afforded economic freedom and equal rights."

It's hard to say exactly how much athletes could fetch on an open market for their names. It could range from a few hundred dollars for creating personalized video and audio greetings for fans through companies such as Cameo, to thousands of dollars for doing television advertisements for local businesses.

NCAA rules allow for an athletic scholarship that covers tuition, room and board, books and a cost-of-attendance stipend. The cost of attendance is determined by the institution using federal guidelines and generally ranges from $2,000-$5,000 per semester.

Gabe Feldman, director of the Tulane University sports law program, said the NCAA has taken an important step by recognizing its rules are antiquated.

"But the ultimate question is how are the rules modified to both allow college athletes to profit from their name, image and likeness while also being consistent with the collegiate model," Feldman said.

The NCAA has said California's law is unconstitutional, and any states that pass similar legislation could see their athletes and schools being declared ineligible to compete. But the board also said it hopes to reach a resolution with states without going to court.

In addition to pending state laws, North Carolina Republican U.S. Rep. Mark Walker has proposed a national bill that would prohibit the NCAA and its member schools from restricting athletes from selling the rights to their names, images and likenesses to third-party buyers on the open market.

"We're going to continue to communicate with legislators at the state and federal level," NCAA President Mark Emmert said. "That's one of the things that the board is asking of me and my staff and the membership in general, and hopefully we can avoid anything that's a direct conflict with our state legislators."

Earlier this month, KU men's basketball coach Bill Self called the new law in California that allows college athletes to profit on their name, likeness and image "a positive step."

“I think it’s been long overdue to give student-athletes the same opportunities that general students possess," Self said.

KU football coach Miles said during a weekly news conference in late September that California’s law could provide a recruiting advantage over schools in states where endorsement money is not allowed, such as Kansas.

When can I pre-order NCAA 2k?

What sucks about all of this is within a couple of years what KU did to get sanctioned, will be within NCAA guidelines.

What happens to the Kansas situation with the NCAA...and the other schools? What about those Adidas guys in jain and hit with criminal records?

Has nothing to do with the Kansas case.

What could possibly be un-Constitutional about the California law? Unless they're referring to a document constituting the rules and bylaws for the NCAA?

Wow, you talk about unleveling the playing field, this tilts it 45 degrees to the big schools in the populated states. How many T-shirts can UCLA or UT sell vs KU or Nebraska, if the player gets a % of each, guess where he’s headed.

This isn’t going to get KU out of the crapper and it’s going to hurt the program in the long run. Only hope is if the NCAA puts a cap on it and it’s low enough most 4 & 5 star players can hit it anywhere.

Its a pretty blurry line between amateur and professional sports that is being created here. I don't know how they are able to regulate it as is, but its only going to get harder.

"Hey Mr. 5 Star recruit, come to our university and I'll pay you one million dollars to appear in my used car commercial."

Bigger markets will have a HUGE advantage over everyone else. You would think they would have to implement some type of "salary cap" like the NFL uses to level the field... But how they would be able to monitor and enforce those rules is beyond me.

I think its fair that these student athletes get a comfy ride through college without having to worry about money. But I also think a huge can of worms is about to be opened, with years of unintended consequences in the future.

There is nothing about their announcement that means anything significant. They've already listed enough stipulations that it shows all they are really doing is trying to hush the critics while also creating a whole new book of rules for everyone to follow while not really allowing much of anything as far as payments go. Basically nothing thus far.