‘How can the public believe what the university says?’ attorney asks 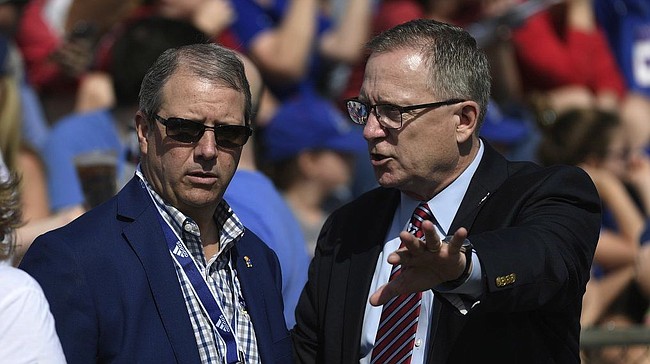 Amid allegations that the University of Kansas basketball program committed recruiting violations, the university has cited a report to argue that its record of compliance with NCAA rules was on par with “the industry standard.”

However, when the Journal-World requested a copy of the report, KU officials declined to provide it.

When asked on Thursday why the public should take the university’s word that it’s being truthful about the report when it won’t release it to the public, KU Chancellor Douglas Girod said “it’s your job if you want to believe it or not.”

The university’s decision to withhold the report didn’t sit well with Max Kautsch, a transparency advocate and Lawrence-based attorney who specializes in open-government issues.

“How can the public believe what the university says about the compliance report if it refuses to disclose it?” Kautsch said. “There is nothing preventing disclosure in this instance.”

In September, the NCAA charged the KU program with lack of institutional control, three Level 1 violations in the men’s basketball program and coach Bill Self with a “responsibility charge.” Level 1 violations are deemed the most serious and can include penalties such as scholarship reductions and postseason bans.

The NCAA’s allegations stem from information that was revealed during an October 2018 trial on corruption in college basketball.

During his testimony, former Adidas employee and recruiting fixer T.J. Gassnola said he paid families of players to steer them to KU, including $90,000 to the mother of former KU player Billy Preston and $2,500 to the guardian of current KU player Silvio De Sousa.

In its initial response to the allegations, the university said Girod and Athletic Director Jeff Long brought in an outside compliance expert to review KU Athletics’ compliance program.

“The report found that our compliance program meets or exceeds industry standard in all facets,” the university said in September.

With the university publicly citing the report, the Journal-World requested a copy of it through the Kansas Open Records Act to verify its findings. The university denied the KORA request, citing a provision that allows public agencies to deny requests for “records of agencies involved in administrative adjudication or civil litigation.”

The recent denial is the second time the university cited the report publicly and then refused to share its findings publicly. In April 2018, Girod told the Journal-World he had received verbal briefings about the examination but that he did not receive a written report or other detailed written findings.

“We didn’t really ask them for a written report,” Girod said at the time. “We didn’t feel the need to release an external report. What we needed to be sure of is that we are comfortable and confident in the way our team operates and in meeting any and every requirement necessary.”

But the university later referred to the findings as a report in its recent communication. Kautsch said the Kansas Open Records Act allows public agencies to deny requests from the public for records under certain circumstances, but the law generally does not prohibit those agencies from releasing the records.

“In this instance, there is nothing that mandates the university to withhold the requested documents,” he said. “It’s strictly the university’s choice to do so, which makes it difficult for the public to challenge or verify the circumstances surrounding (the NCAA’s) investigation.”

Girod told the Journal-World on Thursday that the university would not release the report to the public. He said it would be used in the university’s official response to the NCAA’s Notice of Allegations.

“We’re focused on the NCAA and our response to them,” Girod said. “We don’t want to confuse the two.”

This article is a prime example of why they won't release it. Media historically picks those things apart, quotes out of context, etc. Maybe local Lawrence journalists wouldn't but there is at least one at the Star who surely would as would many other media outlets. And teams recruiting against KU would do the same, using quotes out of context as ammunition. It would just be plain stupid in today's world to trust media to report purely factually. Once all is settled, then the documents should be available.

Cry me a river.

This quote: “It’s strictly the university’s choice to do so, which makes it difficult for the public to challenge or verify the circumstances surrounding (the NCAA’s) investigation.” says it all. Why the he** does the public need to challenge the circumstances surrounding the investigation? Oh that's right, they don't. So everyone get out of the way and let the big boys fight it out.

I totally agree with the 2 above. This is another example of media nosing for nothing more than to create more "fake" news and disputable opinions. It`s counterproductive for the university to provide these details at this point.

Some of you act as if the media, especially the local media should be a cheerleader. It would seem that if KU put out a blanket or general statement, it is a reporter’s responsibility to do more than quote a university press release and to get more detail to verify the statement.

A journalist job is to report the story (that includes digging for more information) but not to create or embellish the story. But sadly that is what passes for journalism these days. If I were the defendant in this situation I would keep my defense very close to the vest. Why would you want it posted everywhere so it can be picked apart before trial (or whatever "legal process" the NCAA goes through since they are prosecutor, judge and jury)

Good points even though this is not a trial and there will be ample time for the NCAA to pick apart any refutation that KU provides but the point of not wanted to discuss the specifics through the media is valid. Perhaps a statement from the university less flippant than “it’s your job if you want to believe it or not." would be more appropriate,

Is this a news article? Boo hoo, the University won't provide the newspaper with a report, nor do they have to. Maybe they don't understand that the paper really, really, REALLY wants it because they've obviously picked sides in this matter and hope that the report has some dirt in it they can exploit.

Kudos to KU for telling you guys to go pound sand, and kudos to KU for focusing their energy on mounting a vigorous defense against the NCAA charges.

Sad that KU has such a storied journalism school, yet their local paper's idea of "investigative reporting" is to whine when they aren't given what they want. Get out of the office, guys. Go "investigate" stuff the old fashioned way: talk to people, develop leads, chase them down. "But KU didn't give us what we wanted.....WHAAAAA." Pro tip: the job STARTS when you're told "no".

Thank goodness you interviewed a Lawrence-based attorney and informed us that this didn't sit well with him.

You could interview another attorney who would say "whatever, it's no big deal."

The spin you're trying to put on this with every article is apparent and unbecoming. I don't think anyone wants or needs you to be a homer and report through rose-colored lenses, that's not exactly journalism. But neither is this.

This seems to be Missouri-style journalism.

All the comments seem to be kentucky-style comments.

Yep. Can't imagine everybody would be cool with Kentucky/Duke refusing to disclose similar types of things...

Funny thing is - if things go south, then suddenly every poster in this comment supporting not disclosing the report will want to know exactly what was said in it and ask for it to be disclosed.

Typical Dylan article, just a re-hash of his vendetta against KU. Nothing to see or read of value here.

Does anyone remember the NCAA bylaws require the institutions under investigation to keep all information out of the public eye? Yes, KU threw the NOA out there against those rules, but I think they did that for some sense of transparency to match up with their initial press release response.

At that point, however, they made a move to comply with the NCAA's guidelines and they said at much when all at KU are saying they are "following the process".

If this does end up in litigation (likely), it would be wise of KU NOT to put anything they plan to use as ammunition out for public consumption. So, there's your answer LJW. The NCAA doesn't allow for the university to release any info to the public in these instances AND KU is keeping everything close to the vest because the NCAA and KU will likely end up in court.

Maybe you should go do some research about the process and publish that instead of trying to out the university in how they intend to beat the NCAA.

Respectfully, Mr Kautsch states the law as he like it to be, not as it is, and of course the LJW (Mr Kautsch's client?) takes the bait. FOIA-type laws permit public litigants to withhold materials connected with litigation, and the school is using this report to answer the NCAA's charges. Leave them alone. The one sure way to upset a decision-maker like the NCAA is to try to litigate one's case in public.

Did anyone else find the NOA difficult to read with all the punctuation errors? Specifically, all the glaring mistakes using a semicolon? Ugh. Apparently, the authors of the NOA weren't trained writers.

The fact is the University is obligated to defend itself, and the athletic department to the best of its abilities. The NCAA does not want this to be aired out in public opinion, and frankly KU has to be very careful of the same thing.

My daughter is a journalist, and she has often told me that the writer of the story often does not assign the headline. And I have very often found the two to be at best contrary, at worse, in direct opposition to each other. The shame to all of us is that people often simply register the headline, so KU is very wise and prudent to limit the amount of public exposure, and opportunity for LJW reporters to make a name for themselves at the expense of KU and its athletes.