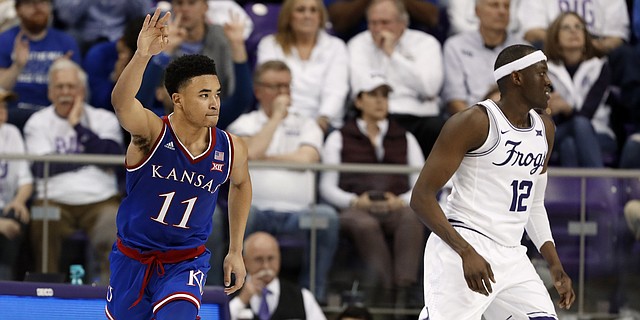 One day after naming Kansas center Udoka Azubuike as the top player in the Big 12 Conference, the league’s coaches pegged Azubuike’s team as the one to beat during the 2019-20 season.

Kansas, which features two preseason all-Big 12 picks in Azubuike and sophomore point guard Devon Dotson, received eight of the nine available first-place votes in the coaches poll that was released Thursday morning, with second-place Baylor and third-place Texas Tech each receiving one first-place vote of their own.

The Big 12’s 10 head coaches are not allowed to vote for their own team.

“I’m not going to make a prediction,” KU coach Bill Self said Wednesday when asked about the league race. “Last year wasn’t our best performance and we had two teams in our league better than us and our goal will be not to let that happen again.”

This year marks the ninth consecutive season, and 19th time in the 24-year history of the league, that the Jayhawks have been picked as the preseason favorite.

During the previous 18 seasons in which Kansas was picked to win the regular season title, the Jayhawks finished on top 15 times.

In all, KU has claimed the Big 12’s regular season title, either outright or via a share, 18 times since the inception of the league in 1996-97. KU’s stretch of 14 consecutive Big 12 titles, which came to an end last season, when Texas Tech and Kansas State shared the title, is an NCAA record. KU’s haul of 61 overall conference titles also is an NCAA record.

With the exhibition opener now just a week away and their first regular season showdown, with Duke in New York, arriving 12 days after that, the Jayhawks remain a work in progress heading into the 2019-20 season.

“I like ’em,” KU coach Bill Self said of the 12 scholarship players and three walk-ons on this year’s roster. “I don’t think that we’re close to being a good team yet.”

Despite returning three starters and eight letter winners from last season’s 26-10 team that entered the 2018-19 season ranked No. 1 in the nation, the Jayhawks’ 2019-20 lineup features six new faces and four more playing just their second season of Kansas basketball.

So far, though, through the team’s first 10 official practices, KU coach Bill Self has liked what he’s seen.

“They’re competitive, they’re actually pretty good listeners, they’re trying hard,” Self said Wednesday. “One thing I didn’t realize is we only have 12 practices left until we play Duke (Nov. 5 at Madison Square Garden). I’m thinking we’ve only practiced 10 times, but, no, we’ve practiced 16 times. So these next 12 (practices), we can’t waste any of them and need to get a lot of stuff in.”

The overall health of the roster should aid in that quest. Senior graduate transfer Isaiah Moss is back to full speed after a hamstring injury and Self said the rest of the roster has looked strong in recent weeks.

“Other than Isaiah’s tweaked hamstring, we’ve been pretty fortunate so far,” he said. “(Moss is) actually much better from a physical standpoint. (Wednesday) was the best day he’s had since he’s been here. He looked quicker and he would be the first to tell you that he feels better than he has up until this point.”

KU opens exhibition play on Thursday against Fort Hays State and will play its exhibition finale on Halloween against Pittsburg State before heading off to New York to tangle with Duke in the Champions Classic.