Both before and after his Kansas football team’s midseason bye week, head coach Les Miles spoke of the importance of self scouting during the Jayhawks’ relative downtime.

However, as often is the case with Miles, he didn’t allow outsiders much of a peek behind the curtain in terms of how this past week’s practices benefited KU’s defense.

What did the coaching staff learn about the defensive unit during its early October self assessment? What needs to improve going forward?

Miles didn’t exactly answer those questions during his first press conference since the bye week.

“Well, the good news is that they're a pretty talented team,” Miles replied, when asked about the defense. “Yeah, I think they're the kind of team that will continue to play and play and play. I like the three-down up front, and I like the linebacking corps. I think a team gets better.”

Six games into the 12-game schedule, the Jayhawks’ defensive statistics are more concerning than encouraging. According to ESPN’s analytics, KU currently ranks 103rd in defensive efficiency.

It’s even difficult to single out a specific strength on that side of the ball, coached by defensive coordinator D.J. Eliot. If forced to pick the defense’s strong suit, one would most likely look to the secondary. According to the Pro Football Focus grades provided to Jayhawk Slant, that’s where you can find the only two KU starters who graded out as above average in the first half of the season. Safety Bryce Torneden received a 74.0 grade and safety Jeremiah McCullough was right with his fellow senior defensive back, at 73.6.

KU’s leading tackler on the season, with 43 total stops, Torneden, following his head coach’s lead while speaking with reporters on Monday, kept the self scouting analysis that went on with the defense vague. 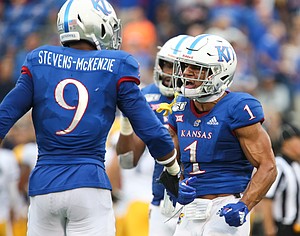 “Really just keep our energy and our confidence,” Torneden said, when asked what message the coaches had for KU’s defense headed into the last half of the season. “Continue to improve — that’s all we can do. Take it week by week. Focus on this week and be careful not to look ahead — that’s the biggest thing.”

With six games left to improve upon all of those numbers, Torneden hopes this past bye week will prove worthwhile.

“It gives us a chance to regroup and kind of get the energy back,” Torneden said. “It came at a good time.”

Well I hope the recruits coach Miles help in the future!We got what we got now we cannot change or do miracles now! We just got to improve mentally and fundamentally!

It’s a character check. Who steps up?

Which means, defensive unit numbers will become less, when the offensive numbers increase.

Are we really 26th in the nation in Red Zone Defense?

Jim - When combined with the scoring D ranking of 86th, I think it means that our opponents have a lot of scoring plays of 20+ yards.

Although I’m not sure empirically how this year compares to last year, I do recall years gone by when any double digit rankings were more exception than norm. It’s encouraging that there are very few triple digit rankings and represents the continued improvement that has generally been going on for the past 5 (?) years.

I also completely agree with Michael, that the OC change could end up benefiting the D In addition to the O.