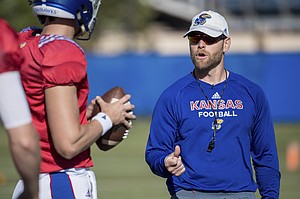 Carter Stanley on change at O.C for Jayhawks by KUsports.com

Always amazed when you can get a meaningful quote from coach Miles from his required press conference. He is clearly not a talker when it comes to the media and he keeps everything “close to the vest.” He is much more interesting and informative on ESPN+ “Miles to Go”.

After 10 years of happy talk and a dreadful team, I'll believe it when I see it.

How many OCs have we burned through in the last 10 years?

Conceptually, I like the idea that Miles is building something. I certainly feel better about HIS ability to do that as opposed to most of the previous coaches since Mangino.

But until we see true progress on the field, it's hard to get to charged up about it.