The 10th consecutive start of Carter Stanley’s final season with the Kansas football program might go down as the most frustrating one for the senior quarterback.

After so often this year expressing how much he appreciated Les Miles and the coaching staff sticking with him through his least productive moments, it was in Stillwater, Okla., on Saturday that Stanley got benched.

“It’s tough to tell if it helped me,” Stanley told the Journal-World following the loss. “I don’t think it really did. It was an experience.”

After a difficult first half for the entire offense, during which Stanley completed 7 of 15 passes for 69 yards with one interception, the 6-foot-2 fifth-year senior watched the entire third quarter from the sideline with his hands gripping his own shoulder pads instead of a football.

When three possessions worth of the Manny Miles experiment at quarterback netted 36 yards on 15 plays, Les Miles and the staff went back to Stanley for the fourth quarter of what ended up a 31-13 loss to Oklahoma State. 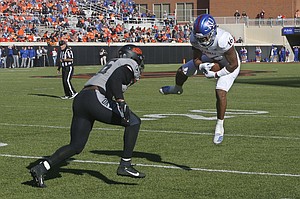 Once Stanley returned to the field, with KU down 31 points, the offense picked up 11 first downs in the fourth quarter, when Stanley went 15-for-22 passing, with 157 yards and two touchdowns.

Stanley described it as “tough to say” whether his time out of the lineup helped him recover or fired him up.

“I was still kind of taking the same approach that I do when I’m on the field,” Stanley said of his thought process while sidelined. “I’m looking at defensive backs, linemen, looking for coverage, looking to see if pressure’s coming.”

As teammates learned of the change at QB to open the second half, Stanley said many came up to him to voice their support, including some “great words of encouragement” that stood out from receiver Kwamie Lassiter II.

“It was all good. They were saying, ‘We’re still riding with you. You’re still our guy.’ That’s encouraging for me for sure,” Stanley shared. “I didn’t feel like I kind of lost it all there. I just wish I could’ve got a better start there for our team.”

Once Les Miles decided to put Stanley back in, the QB came out firing and the offense finally put together a couple of effective drives.

Receiver Stephon Robinson Jr. (six receptions, 68 yards and one TD) acknowledged Stanley handled the situation well, after being put in a difficult spot.

“That’s a leader right there,” Robinson said. “When he comes out he’s not discouraged or anything like that. He’s supporting his teammates, and we know when he comes back in he’s ready to make a play and get us the ball.”

Second-string QB Manny Miles also applauded Stanley for finishing the game the way he did. 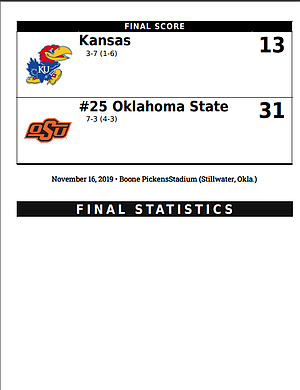 “Carter’s a leader and a fighter and definitely isn’t going to back down from anything,” said Manny Miles, a graduate transfer from North Carolina. “Him coming out and coming back in shows tons of maturity and leadership. It was awesome that he could come in and close out a couple of drives at the end and show that we could move the ball on this defense.”

Although Stanley struggled in the first half, the QB said it wasn’t any fault of his targets.

“Our receivers are extremely capable against anyone in the conference. We still had some open guys for sure, just maybe didn’t get to all of them,” Stanley said.

Instead, it was pressure from the OSU front that sped up Stanley at times. KU’s offensive line and its protection issues had as much to do with the Jayhawks’ sluggish start as anything.

Stanley said the early injury setback that kept left guard Malik Clark out made the O-line’s job that much more difficult.

“Anytime you lose a guy, no matter what position it is, that stinks. Malik is one of my favorite guys on this entire team and it stinks that he went out,” Stanley said. “It’s got to be the next man up. He’s got to step in and do his job and step in and play for us. We had some pressure for sure, but that’s also what Oklahoma State kind of does for the most part.”

The Cowboys’ defense was credited with five QB hurries, two sacks and five pass breakups and OSU intercepted three passes — one each from Stanley, Manny Miles and Thomas MacVittie.