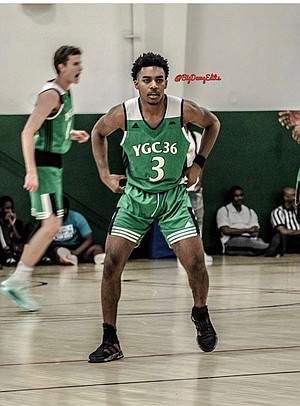 That’s getting to be a ton of guards because we’ve also got the late signing G that’s redshirting.

Yes, a lot of guards. I guess HCBS is a four guard convert and loading up on shooters.

At 5’11 I hope you're a lights out shooter Mr. Jossell. Otherwise I find it unlikely you’ll get much PT. You’re going to have a lot to prove to play at this level. I hope you’re up to the challenge young man. Glad to have you and welcome to the Hill!

Always good to add a "lights out shooter" ! Welcome Latrell!

I think this is a great "sign". He is a kid who will most likely stay for four years (maybe five with a redshirt) and learn the system. He will get bigger and stronger. He was originally from the Chicago area and we all know Bill loves to get guards from Chicago because of their perceived toughness, although this kid has been in TX for the last four years according to this article. Welcome aboard and Rock Chalk Jayhawk!

Over the last 5/6 years Coach Self has done a great job developing these under the radar 3 star guards.

Welcome to all four but they are all pretty slim, better start getting on the strength and nutrition program now.

I really like their attitudes, feel KU is their dream school and will be program first multiyear contributors. With the exception of Josh and Wigs, one and dones like Selby, Oubre, McLemore and,Grimes who actually played, not to mention those like Diallo and Preston who never did, have been highly overrated versus the production of playing another four star that had already been in the program for at least a year in terms of strength and knowledge of their role in the offense.

Sounds like Latrell could become another Collins type PG who lights you up if you dont engage him at all times, either by shooting or blowing by on a drive, but without the constant struggle with his weight. A guy so pesky, regardless of his size, it affects the way the defense covers your offense, keeping them honest so to speak.

At 5'11" dude has some ups now!! And certainly showed off serious range on his shot hitting NBA range 3s. Reminds me of a young Frank Mason with a better shot at the same stage. IF he gets close to Frank type success........winner, winner, rock chalk dinner! Welcome to the Phog Latrell!

Self seems to be going back to the days of get the recruits in house sooner than later. That's how he won a National Championship back in 2008. Stop playing the game of waiting for the 1 and Done players. The 1 and Done players are very athletic individuals. However, they seem to be the players who have cost Self and staff more headaches and misery on eligibility issues (than enjoyment).

OMG....Howdy!!! Do I ever agree with that statement!

First things first. If a one and done is waiting around to see if they get to go to UK, Duke or UNC then who cares. They can go somwhere else. If they don't care enough about KU over these other schools to begin with they are either the ones getting $ under the table and doing it all for the money or their hearts are in another direction anyway.

And Yes!, Finally, who needs the headache associated with players that fit this model. Eligibility issues, selfishness, the NCAA liability issues. How does that translate to TEAM.

Hopefully Latrell will take after Sprewell's talent and not the choking of his coach ...

Lesson One - Allen is a Field House, not an arena.

Lesson Two - Good shooting gets you smiles, good defense gets you playing time.

Nobody cares whether he can dunk or not? Well, I do!!

Welcome to the family, Latrell!!!