Duke guard Tre Jones (3) and guard Cassius Stanley (2) react after a basket during the second half of the team's NCAA college basketball game against Kansas on Tuesday, Nov. 5, 2019, in New York. (AP Photo/Adam Hunger)

New York — For 39 minutes of Tuesday’s Champions Classic clash with Duke at Madison Square Garden, the third-ranked Jayhawks found a way to overcome a startling number of turnovers.

But in the final minute, with a chance to take the lead, the Jayhawks’ 28th turnover of the night finally did them in and Kansas fell to the fourth-ranked Blue Devils, 68-66.

After getting a crucial stop on the defensive end when Duke’s Vernon Carey Jr. missed a baby hook in the paint, the Jayhawks, trailing 64-63, pushed the ball up the floor with the chance to regain the lead.

Point guard Devon Dotson raced up the right side and zipped the ball across the floor to Marcus Garrett, who quickly dumped the ball down to sophomore David McCormack on the baseline. With KU coach Bill Self encouraging his team to attack, McCormack saw senior center Udoka Azubuike alone in the paint, but hesitated for two heartbeats before throwing the pass.

That allowed Duke forward Jack White to slide in front of the Sunday hop, and that all but iced the game for the Blue Devils (1-0).

“Don’t put that on him,” Self said of one of three McCormack turnovers on the night. “I thought he had a shot, a little three or four footer, and he tried to make the extra pass, which isn’t the percentage play. But that’s on me more than the kids.”

After the loss, McCormack agreed with Self but said his eyes grew wide when he saw Carey leave Azubuike all alone in the lane.

“I could’ve had a shot,” McCormack said. “But I thought Dok was open for a quick layup. I just misread the pass.” 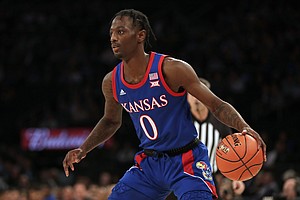 Asked if he saw Azubuike point up toward the rim before he threw the pass, McCormack said simply, “I actually didn’t see him point up. I just saw a defender come over and help and I thought it would be a quick bounce pass.”

The turnover at the end was merely the final blow in a night in which Kansas continually gave the ball away from start to finish.

Asked if he thought turning it over 28 times and losing by just two was a silver lining on an otherwise gray night, Self paused and paid homage to a well-known eternal optimist and motivational life coach.

“Yeah, I guess if you’re Tony Robbins you could look at it that way,” Self joked. “I think we played uncharacteristic. I think we got out of character. I think we made easy plays difficult many times. I think a lot of that is nerves and the environment and guys wanting to do well.”

For a good chunk of the second half, things went much smoother for the Jayhawks than they did in the first.

Once they began taking care of the ball, the scoreboard began to tilt in their favor. After staring down a quick five-point deficit early in the second half, KU ripped off a 14-0 run to open up a nine-point lead at 46-37.

“We were more aggressive, defensively, getting after them and speeding them up how they were speeding us up,” Agbaji said after the loss.

The run, which featured several Kansas stops and was jump-started by an Agbaji backdoor cut and slam, put the momentum firmly on the side of the Jayhawks. But it would not stay there.

A pair of Duke 3-pointers pulled the Blue Devils back into the game and served as the starting pistol for the Kansas turnovers to return.

After turning it over just three times in the first nine minutes of the second half, KU coughed it up at key times during Duke’s run and down the stretch.

The Blue Devils answered KU’s 14-0 run with a 19-6 spurt of their own to reclaim control and put the pressure on the Jayhawks. 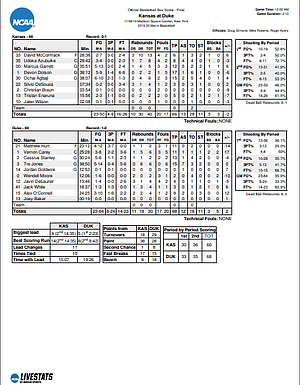 Dotson turned it over six times, Agbaji coughed it up five times and Azubuike turned it over four times, including back-to-back travels during the first half.

“Duke’s defense is better than (what we saw in) the exhibition games we played,” Self noted.

Despite that fact, McCormack said the turnover spree was disappointing for a group that featured veteran players logging 95% of the minutes.

“I think it was more unforced, clumsy mistakes, just not having (good) basketball IQ in the moment,” McCormack said.

The loss snapped KU’s three-game winning streak in the Champions Classic and put the Jayhawks in a spot that most on this roster have not experienced during their KU careers.

Because of that, along with the fact that this game was on college basketball’s opening night and featured another blue blood program on the winning side, the Jayhawks were noticeably irked by the outcome.

But those who spoke with the media after this one quickly turned the page to emphasize that what happens in the Champions Classic does not dictate how the rest of the season goes.

“We’re disappointed in the outcome because that was a game that either team probably could’ve won multiple times,” Self said. “We had ourselves in really good position in the second half and then the game got away from us and they made some plays. But it’s a learning experience. I don’t know that a game, win or lose, on Nov. 5 is going to count much in March, but still yet there’s a lot of things we can learn from this game and hopefully improve on.”

Added senior guard Marcus Garrett, when asked what he wanted to see from his team in response to Tuesday’s setback: “Just staying together. (We had) 28 turnovers and we lost by basically five points against a good ball club. So we’ve just got to stay together.”

Kansas returns to action Friday night for an 8 p.m. clash with UNC Greensboro in the season’s home opener at Allen Fieldhouse.

Wow - 28 turnovers - probably need to get some balls before you content for a three game win streak. But what do I know. Rock Chalk!

The best three point shooter watched from the bench.

Kansas lost by two to Duke with 28 turnovers. First game of the year. I cannot imagine a higher ceiling.

Agreed... at the end of the day we lost by 2 and I can’t remember a game where we had that many turnovers... is what it is... should be a fun season!

While the headline understandably deals with the turnovers, the real lost points occurred at the free throw line. KU cannot shoot 62 percent from the line against teams like Duke and expect to win.

Both teams were horrid from the line, but, if KU turns the ball over even 5 less times and converts those into the layups they could have been, KU cruises. I don't expect that to continue. Both will be really important to KU's success this year.

This was a pretty big stage for a group of athletes who are still fairly big-stage inexperienced.

It was like watching an uncoordinated adolescent with a ton of talent, flailing around, trying to do the right thing.

The fact that KU can only lose by 2 when committing 28 TO should be more concerning for Duke than KU...outside of the 28 giveaways KU outplayed Duke...Duke should be asking themselves how they barely won despite KU having 28 possessions in which KU didn't even get a shot off

There is much to build on but the one thing that sticks with me is that we didn't get the win. We turn it over like crazy and are still in the game. The turnovers were bad and frustrating but that can be allayed a bit by sneaking out the win at the end. The final two minutes were just like any other tight game, we needed to find a way to win that game regardless of how sloppy the previous 38 minutes were and we didn't get it done.

What the skinny with Moss? Is he still hurt?

Yes, and he wasn't here over the summer and hasn't practiced since late night so he's likely way behind in terms of developing him into a KU type player, and in terms of getting reps with his teammates.

Not having Moss hurt us, but not as much as the 28 turnovers.

The one stint where KU didn’t turn the ball over, KU went from down 3 to up 9.

Our Jayhawks are good. I may be disappointed in the loss, but I sure am excited about the path forward as our team gets more comfortable with a more traditional KU offense.

What to do about it? Focus and go win Maui.

KU's big men (Dok, DeSousa, McCormack) combined for just 13 shots... and 10 turnovers. Can't have that. Dok looks like the same one dimensional player he has always been. You can't have your point guard (Dotson) with 1 assist and 6 turnovers. The thing that troubles me about Dotson is that when he penetrates the lane, he is almost always taking his own shot (contested layup), rather than dishing off on the double team. He had one assist. Meanwhile, when Garrett penetrates, he finds people, evidenced by his 5 assists. Dotson needs to create shots more for his team, not just himself.

Frank Mason had this sake issue his first 2 seasons..he finally figured it out that its better to drive and dish to an open big than to try a contested layup...hopefully Dotson cam learn in 2 years what it took mason to learn in 3...and Dok is Dok..this is what he is..I'm not disappointed in him not developing a more well rounded offensive game.)"I'm disappointed in his FT % not improving in 3 years!!!! He'd average 5 points more per game if his % was at least in the 60's

Funny you say that, given that Dok went 2-for-3 from the line (unless I forgot about some other FTs). I'm naturally expecting him to shoot 67% from the line the entire year!