Notebook: Jayhawks will turn their attention to NCAA tournament after loss to Cyclones

Kansas forward Mitch Lightfoot (44) celebrates after a bucket and an Iowa State foul on Kansas guard Quentin Grimes (5) during the first half, Saturday, March 16, 2019 at Sprint Center in Kansas City, Mo.

Kansas City, Mo. — All season, whenever the Jayhawks had a bad outing on a Saturday, the quickest they could hope to put it behind them and move forward from their latest loss was two days away.

But now, following the Jayhawks’ 78-66 loss to No. 5 seed Iowa State Saturday in the Big 12 tournament title game at Sprint Center, Kansas does not even need 24 hours for the reset button to arrive.

That’s because Sunday is Selection Sunday, when the Jayhawks will learn their fate in the NCAA Tournament — who they’ll play, where they’ll travel and what they’ll be seeding in the 68-team bracket that will decide college basketball’s next national champion.

“If we would’ve won, this would’ve been over with by the end of the night anyway,” KU junior Dedric Lawson said after an 8-of-21 shooting night to forget. “So it’s a quick turnaround to what’s important and the NCAA is more important.”

KU point guard Devon Dotson, who was one of the only Jayhawks to find any success on offense in Saturday’s loss, agreed and said the mere thought of going through his first Selection Sunday as a college player was enough to cut the disappointment of a tough outcome in a big game.

“It definitely helps,” Dotson said. “Because this loss stung, so (now) we have something else to look forward to. … I’m excited. Just going through that whole thing for the first time, Selection Sunday, I’m ready to see who we play and get ready for the next weekend.” 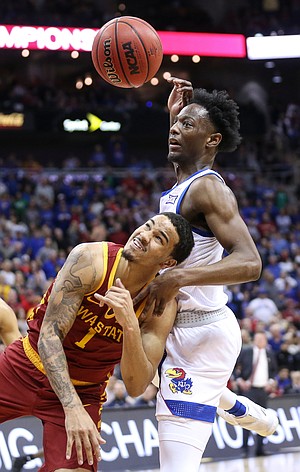 As for any thoughts on where the Jayhawks might be seeded or sent, KU coach Bill Self said he did not think that Saturday’s result hurt the Jayhawks in any way.

Five weeks ago, when the NCAA Tournament Selection Committee released its sneak peek at this year’s bracket, the Jayhawks were penciled in as a No. 3 seed. Eight wins and three losses later, it remains to be seen where the committee will have the Jayhawks in the final bracket, which will be revealed at 5 p.m. Sunday night.

“I have no idea,” Self said. “I can’t believe that it hurt us, getting beat in the finals today. I think it could’ve helped us if we had won. But helping us maybe one line. I don’t know. We’ve played by far the hardest schedule in the country. It’s a monster schedule. And we’ve gone through some crap, but I still think, with this particular team, we’re playing our best right now. The league is so middle heavy. It’s not as top heavy as it’s been in years past, but every time you win, you’re beating an NCAA Tournament team, so I think it’s been good preparation for everybody.”

Bracketologists Joe Lunardi (ESPN) and Jerry Palm (CBS) both had Kansas as a 4 seed on Saturday night, with each having the Jayhawks slated to be sent to different regions and first-round sites.

The updated NCAA Tournament Evaluation Tool (NET) rankings had Kansas at No. 19, which, by math alone, also would put Kansas as the third-best No. 5 seed.

Strength of schedule, Quadrant 1 wins, recent performance and a whole host of other factors will determine the final outcome. But most folks in Kansas City, both at KU and around the Big 12, seemed to believe the Jayhawks would be a 3 or 4 seed in this year’s Big Dance.

Regardless of where they wind up, the Jayhawks appear to be determined to move forward with confidence.

“I think we have a big run in us,” freshman guard Ochai Agbaji said Saturday. “Honestly, I believe that. This is behind us now and, moving forward, we just have to focus on opponent by opponent, game by game.”

Self said Friday night that he thought Iowa State would have the larger crowd for Saturday’s title game by virtue of the ISU fans’ good fortune to have their team play first on Friday and scoop up any extra tickets sold off by disappointed Kansas State fans. 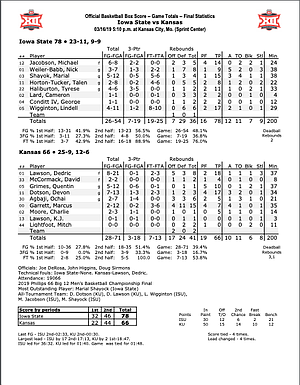 From the sound of things, Self was right. The Sprint Center crowd of 19,066 that was noticeably split seemed to favor Iowa State ever so slightly, both in terms of number and volume.

From chants of “Let’s Go Jayhawks” that morphed, like a tug of war, into chants of “Let’s Go Cyclones,” to Kansas fans yelling “Rock Chalk” and Iowa State fans quickly overriding that with screams of “Cy-Clones,” Saturday’s battle off the floor was just as intense as the one on it.

“They had the majority of the fans, but I don’t think it was 70/30,” said Self, referencing his prediction from the night before on the percentages for ISU and KU. “I thought our fans hung in there and fought pretty hard. We just didn’t give them enough to get excited about. … I thought their crowd was great and, certainly, I thought our crowd tried and did their job.”

Despite playing on a left ankle that is still not quite 100 percent following an early February sprain that forced him to miss five games, KU sophomore Marcus Garrett followed up a strong effort in Friday’s semifinal with a monster effort on the glass in Saturday’s title game.

Garrett led everyone with a career-high 15 rebounds — 4 on the offensive end — and added 7 points, 4 assists and 1 steal in 35 minutes against Iowa State’s guard-heavy attack.

“He’s great. He’s great,” Self said. “Love Marcus. He’s tough. He’s a winner. And he should be as close to 100 percent as he possibly can going into next week.”

Dotson and Lawson joined three Cyclones on this year’s Big 12 all-tournament team, announced at the end of Saturday’s title game.

“I guess it’s cool,” said Lawson after combining for 58 points and 19 rebounds on 23-of-49 shooting for the tournament. “It’s something to be proud of, I guess. At the end of the day, I still came up short.”

Dotson, meanwhile, finished his three-day stretch with 47 points and 13 assists, while playing all but 16 minutes of the three games.

Mitch Lightfoot’s nine blocks in the 3-game tournament are tied for fifth-most in the event’s history ... Speaking of blocks, Quentin Grimes tied his career high with two blocks on Saturday ... KU’s 27.8 percent shooting in the first half was the team’s lowest in a half this season ... Iowa State, as the No. 5 seed, is now the lowest-seeded team ever to win the Big 12 tournament title ... KU is 11-3 all-time in Big 12 tournament title games, including a 3-3 mark against the Cyclones ... Kansas now leads the all-time series with Iowa State, 182-66, including a 1-2 mark in head-to-head meetings with ISU this season.

If these freshmen stick around together, this could be the best freshman class I have ever seen. Devon is already showing Mason. Dave, we know how good he is. Ochai will even it out and Grimes will come around. Plug in Hurt and whoa. We still have a junior class that anyone in the country wishes they could have. And the possibility that for once nobody is forced out to transfer. A team that plays together.

Did you not watch the recruiting class of 2005? I mean that genuinely.

“I think we have a big run in us,” freshman guard Ochai Agbaji said Saturday. “Honestly, I believe that."

Maybe Ochai is right. Maybe we'll get hot at the right time and go on a 1988-esque tear through the NCAAs.

Or maybe we'll have another Bucknell-Bradley moment that would be the cherry to top the turd sundae that has been this season.

I don't know what will happen, and I admit that I don't have the same excitement for Selection Sunday that I do most years. But I'll root for the Jayhawk basketball team no matter what. I learned to live with all those conference titles and 1-and-2 seeds and deep runs to the Elite Eight and Final Four, and I can learn to live with the results of this season too.

My guess is that we have more of a Bradley, Bucknell in us than a big run. Nothing against the team, but consistent performances have not been there

Yep. And no one player who can really carry the team over the course of multiple weekends. Dedric's been very good, but he doesn't really dominate. Weird saying that about a guy who averages 19/10...

We can be good, and we can be real average. To get out of that first week-end we really need to shoot 45-50%.

Face it, since Udoka went out and Vick was excused, this team has not strung together 6 consecutive quality wins. Youth, below Self type talent at each postion, lack of quality depth, and inexperience equals inconsistent play. How many times have I seen Self turn to the bench when someone made a bonehead play, to realize there is not a better option. Yesterday was plain ugly and unless Dedric shoulders the responsibility of this team and contributes like an All American candidate as we were lead to believe from the tip to the final horn, this team won’t get out of the first weekend of the NCAA tournament. The Big 12 is mediocre (KSU and TTU finished 1st and KSU wasn’t even ranked for most of the year) and the competition will be more than Texas and WVU in the first weekend as a 4 or 5 seed. The players can say they have turned the corner, but ISU is only an above average team, which makes KU lucky to even be ranked in top 25 (still living off wins when KU was a preseason #1). This might be Self’s worst year of coaching at KU (for many reasons - some out of his control, but much from his below average recruiting and using scholarships for players who never saw the court). Clearly this group could be better next year depending on who stays and who goes and who Self can recruit at the last hour. Nevertheless this season by many standards, which are granted unrealistically high at KU, has been disappointing.

Just acting like they care to be out there playing for Kansas would be a change.

I get what self's doing. This team has no pressure it's a down year, they already ended the streak. These guys are gonna be loose in the tourney and make a decent run. Remember the 2012 team had no business going deep, honestly last year's team really didn't either. On paper this team shouldn't either, but they're gonna surprise us.

I get it's a down year but come on guys we knew the streak was gonna end soon. And WE MADE THE FINAL FOUR LAST YEAR. Lighten up. We just gotta take it game by game now.