Kansas guard Ochai Agbaji (30) puts up a 3 over Oklahoma State forward Cameron McGriff (12) during the first half, Saturday, Feb. 9, 2019 at Allen Fieldhouse.

Winning three games in three days at this week’s Big 12 tournament in Kansas City, Mo., will be no easy task for any of the 10 teams attempting to do it.

But Kansas coach Bill Self on Monday outlined a blueprint that he thought would take KU to the title.

“I think we have to make shots. I think we have to defensive rebound. I think we have to grow up and play beyond our years a little bit,” Self said during his regularly scheduled press conference to preview the week ahead, which opens with No. 3 seed Kansas (23-8) taking on No. 6 Texas (16-15) at approximately 8 p.m. Thursday night at Sprint Center. 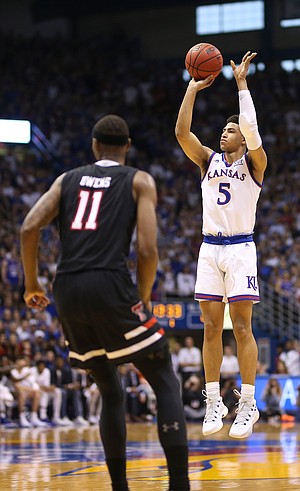 Kansas guard Quentin Grimes (5) puts up a three during the first half, Saturday, Feb. 2, 2019 at Allen Fieldhouse.

Back then, with Kansas en route to a Big 12 tourney title, a No. 1 seed in the NCAA Tournament and a trip to the Final Four, the Jayhawks were loaded with gunners. Malik Newman, Devonte’ Graham, Svi Mykhailiuk and Lagerald Vick collectively shot lights out in the postseason a year ago, particularly Newman, who won Big 12 tourney most outstanding player honors and also was the MVP of the Midwest Regional a couple of weeks later.

No one is expecting this team, which is shooting 5 percentage points lower on more than 200 fewer attempts, to follow the path of that bunch. But Self said Monday that hot shooting has to be a part of the equation if the Jayhawks hope to play through Saturday.

“I do think that we’re capable of playing at that high level,” Self said. “But the team that will advance will be the one like our team last year. We made shots. That’s what needs to happen. We need to have some guys step up and make some shots. We’ve shown we're capable of doing that. We’ve had multiple games where we’ve had double-figure threes.”

Five to be exact. And the last one came Feb. 9, when KU made 11 of 22 from 3-point range in a home win over Oklahoma State. Since then, the Jayhawks have reached 9 3-pointers in a game twice and hit 8 triples three different times but never cracked double digits. KU is averaging 8 3-point makes per game in its last seven outings and 7.5 per game for the season.

While having players with the ability of guys like Graham, Newman, Mykhailiuk and Vick certainly would help KU’s chances, Self said Monday that he felt good about where his offense stood entering the Big 12 tournament. And he pointed to KU’s most recent victory as proof that the shots are there to be had. 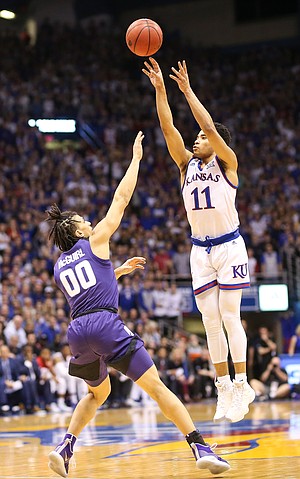 “Against Baylor the other day, I originally didn’t think we played well at all,” Self said. “(But I went) back and watched the game and I saw that we got pretty much any shot we wanted. We just didn’t make it.”

There are, of course, other factors in KU’s chances of making a run to another Big 12 tournament title this week and Self mentioned those on Monday, as well.

One is defensive rebounding.

The Jayhawks are +62 on the season in the rebounding department and have won the battle on the glass in six of their last nine games, playing even with Baylor last Saturday.

The emergence of freshman David McCormack, which the Jayhawks think will help them tremendously against Texas’ big front line on Thursday night, and the presence of Dedric Lawson, who leads the conference in rebounding at 10.6 boards per game, both go a long way toward giving the Jayhawks what they need on the defensive boards.

But rebounding, the way Self sees it, is as much about effort and desire as it is size, and that concept fits perfectly into the final factor Self believes is critical for KU’s chances of winning three in a row later this week.

“We’ve got to make other people play poorly,” he said.

That is a goal of Self’s teams every year, every game, without even needing to be mentioned. And whether that’s through tough defense, scrapping for 50-50 balls or making their opponents uncomfortable all over the floor, its importance is enormous at this time of the year.

Freshman point guard Devon Dotson appears to have received that message loud and clear and the third team all-Big 12 honoree pointed to that goal, even before shooting, as the factor that he thought would give the Jayhawks their best shot at cutting down the nets in Kansas City this weekend.

“We have to be locked in each and every game,” Dotson began. “And we just have to make the other team play worse than us. So not let them be comfortable, be turned up every possession and just making the smarter plays. Just really having that stand that we can stop this team and we can beat any team on any given night. Just having that mindset.”

if we can at least defend the perimeter, we will have a chance to march forward. offensively, even without our 3s falling, i have faith we can do the damage inside with Lawson & McCormack down low. and please let Ochai fly high...

Interesting headline. Was there an alternate gameplan where they planned to go 7-31 from 3-pt range again?

Matt Tait's headline is certainly an attention grabber! However, if you read Bill Self's comments, he is focused on "making shots" and "defensive rebounding".

Let's all remember that Bill called 3-point shooting "Fools Gold" last year. But, Bill knows that "made" 3 point shots are critical to victory!

I applaud Matt Tait for his astute observations. He is "second to none" in dotting the "I" and crossing numerous "T's"! Rock Chalk!

If will be challengeing for a poor 3 point shooting team to become reliable overnight. Some of the stats, if I am not mistaken, include Vick, who still leads the teams in 3 point makes. Play great defense, run the offense through Dedric, and hope to win ugly. Rock Chalk.

I'm surprised we are ranked 3rd in the conference in shooting, I would have guessed lower.

I am really looking forward to this tournament...we have a lot of scores to settle...we are the best team...best roster....best coach...best staff...best program...period!!!...Yeah...we lost a few road games ....we were learning and as the team that had won 14 straight titles...yeah...we had a huge bullseye on our back...really...its about time another team was able to take the title......the Big 12 is always one of the premier basketball leagues.......every year...and to have won 14 straight years...was unbelievable....I know we should win this tournament and believe we will...starting with Shaka and co...which may be his last in Austin...then..we get to dig up Texas Tech...and destroy them......then Saturday......those purple people.....if they don'r get beat...which I think they might.......without Wade....and we can cut down the nets in KC.... and win the league and get the automatic bid...and end up with a higher seed than any othe Big 12 team...and once the dance starts....we will have loads of momentum...and LOOK OUT!!!!!....I TRULY BELIEVE IN THIS TEAM and think we can win it all!...Crazy things happen in March...if you bring the energy......the effort........the will to win........anything is possible...... HOW BADLY DO YOU WANT IT!!!!!

One factor that wasn't mentioned is turnovers. I would bet that when you look back on the worst games of the season, a huge number of turnovers (and especially sloppy, stupid ones) were a big factor in those losses.

Of course there was no one worse at dumb turnovers than Vick, so even though we clearly miss his shooting, we certainly don't miss most of the rest of his game ...