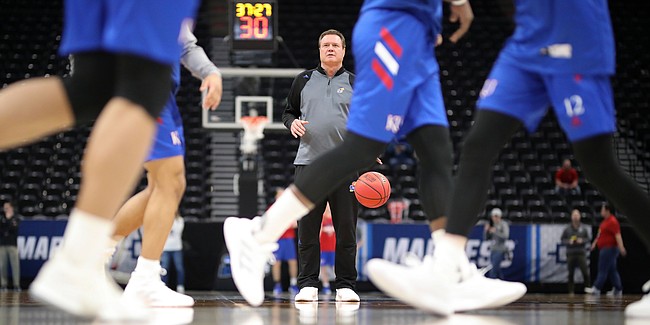 Count Kansas basketball coach Bill Self in the group of people unsure of whether KU will be one of the programs receiving a Notice of Allegations from the NCAA later this summer.

Speaking with reporters at Monday’s Bill Self Basketball Camp, Self offered his input on last week’s report from CBS Sports that quoted NCAA vice president for regulatory affairs, Stan Wilcox, as saying, “at least six Division I men’s basketball programs” would be receiving notices this summer in the wake of a federal investigation into corruption in college basketball recruiting.

“I have no knowledge of who he was talking about or anything like that,” Self said Monday. “But certainly the fan bases of all the (programs) that were mentioned, I’m sure, are very interested in what he meant by that.”

Last week’s CBS report indicated that “at least 20 schools were mentioned during the course of the FBI’s investigation.” In addition to acknowledging that notices were forthcoming for Level I violations, Wilcox added that at least two “high-profile programs” would receive theirs by early July.

Others that were mentioned at one point or another during the recent federal trials include KU, Louisville, LSU, Creighton, North Carolina State, TCU, Miami (Fla.) and more.

“I’ve got no comment on (the CBS report) because only he knows exactly what he meant by what he said,” Self said Monday. “I just think to predetermine what’s going to happen before investigations are done, I think that comes pretty strong. … I was shocked to read that something could be said that was not specifically intended for anyone, but it made all 20 schools that were mentioned in the FBI deal and their fan base feel like it was.”

That sounds like the commentaries here. Let sling around a bunch of innuendo as if it were fact. Maybe shrug it off when turns out to be wrong. Maybe just look for next innuendo.

What is disappointing is we are going to have 2-3 articles a week on this until the list is released. I fall into the trap of hoping to get more and more information; however, I don't seem to get anymore and what I see, the only thing that could come up is that De Sousa played his Freshman year with a Amateurism issue of $2300 payment. He later served 3 times the length of a suspension for that amount and therefore, I kind of think that this one has been covered. I fear that the NCAA will try to have the wins vacated, but I don't think that will happen because once it was noted, KU immediately sat the player and held him out precautionary and he served his entire time.

Based on what is publicly known, KU's recruiting liabilities are limited to Billy Preston and Zion Williamson. Billy never played a minute for KU so at the very least that should be worth something to the NCAA in terms of minimizing potential penalties. The recruitment of Zion shows intent albeit in a somewhat ambiguous manner and since he signed with Duke, whatever inducements were promised were never delivered.

How about the Duke inducements? Oh my bad, Duke is as pure as the driven snow. RCJH

Exactly...the "Nike trial" has come and gone and Duke is a pure as the driven snow since they were able to land a recruit without any extra inducements over a program what was going to have to do whatever it takes to get Zion for 9 months. ;)

Give me a break.

By no means giving Duke a pass but they did not leave a paper trail the way we did.

I think if people were actually looking for a paper trail there would be plenty. If "Player A" was asking for money from KU and chose someplace like Southern Methodist instead, the same NCAA body would be in full force at the Mustang's doorstep to hammer them. The only reason he is immune is because of where he went. If that isn't a "pass" I don't know what is.