The Kansas men’s basketball team has added a shooter to its roster for the 2019-20 season, and, after a whirlwind month following his final class at the University of Iowa, grad transfer Isaiah Moss again believes he is where he belongs.

“I feel like this is where I’m supposed to be,” Moss told the Journal-World during a Monday afternoon telephone interview a few hours after committing to play his final season of college basketball at Kansas. “I feel comfortable and I’m excited to move forward and am looking forward to everything.”

Less than 72 hours after announcing he would reopen his recruitment after committing to Arkansas a couple of weeks ago, Moss revealed on Twitter Monday afternoon that he had picked Kansas.

“First and foremost, I want to thank my family, teammates, and coaches for their continued guidance and support,” Moss Tweeted just after noon on Monday. “After evaluating all my options, I have decided to commit to the University of Kansas.”

A 6-foot-5, redshirt junior from Chicago’s Simeon High School, Moss told the Journal-World that his initial decision to commit to Arkansas came during a hectic time. 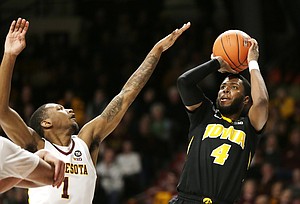 Iowa guard Isaiah Moss(4) shoots in front of Minnesota guard Dupree McBrayer (1) during the second half of an NCAA college basketball game Sunday, Jan. 27, 2019, in Minneapolis.

The calendar certainly backs that up.

After finishing his final class at Iowa on Thursday, May 9, Moss went to Arkansas the next morning and stayed for a two-day visit. On his way home, he stopped by Lawrence for an unofficial visit on Sunday night and then committed to Arkansas three days later.

“I just felt like I was moving too fast and I didn’t get to think about it the whole way through,” Moss said Monday.

Stuck in the back of his mind the entire time was one important fact about his Kansas visit that took place on May 12.

“I liked Kansas a lot when I came out there for a visit,” Moss said. “They showed me a lot of things, I learned a lot about the history of the program. I liked it a lot. I just wanted to win at the highest level. Just being able to play for a place like Kansas, such an historic program, and for a Hall of Fame coach, that’s what caught my eye.”

Moss’ addition provides KU with some much-needed 3-point shooting prowess on a roster that returns just 28 percent of its 3-point makes from a season ago.

While starting all 35 games and earning Iowa’s Most Improved Player award, Moss shot 42% from 3-point range, which ranked fourth in the Big Ten.

“We’ve obviously been looking for shooting throughout this recruiting period and we feel like we have addressed some of those needs with Isaiah’s addition,” KU coach Bill Self said in a Monday news release. “When Isaiah is on the court, he’s going to be a guy that could be a 40-45 percent 3-point shooter and, with the line moving back, I think it’s going to be even more important to have somebody who's consistently good from beyond the arc.”

While his 3-point touch certainly is a big part of his game, Moss said it would be wrong to classify him as just a shooter.

“Really, I just want to do whatever coach wants me to do,” Moss said. “I can play defense, I’m pretty athletic, I can slide, so whatever coach needs me to do I’m going to go out there and do it to the best of my ability.”

Moss, who will wear No. 4 at KU and will report to campus in August after a summer internship in Chicago, becomes the 15th player to transfer in to the Kansas program in the Self era and the third graduate transfer, joining Tarik Black and Jack Whitman.

Last season, he was fifth on the Hawkeyes in scoring (9.2 points per game), second in steals (32) and fourth in assists (62) while reaching double figures 15 times, including eight games of 15 or more points and four games with four or more 3-pointers.

“Isaiah was a very good player on a very good team at the University of Iowa,” Self added in the release. “He’s played in big games. He’s certainly used to the physicality of our sport after playing in the Big Ten and has been very well-coached and drilled. He also played at a top high school program at Simeon (Career Academy) in Chicago. I’m very excited about him and the opportunities that he will give us to stretch the floor and certainly play with a couple really good big guys.”

Added Moss: “I’ve seen it all. I got a piece of the NCAA Tournament this year and I feel like I’m ready to bring it.”

Moss’ addition brings KU’s total of scholarship players on the 2019-20 roster to 11, leaving two more spots to fill if Bill Self and company so desire.

One of those spots could be filled as soon as Wednesday, when 4-star prep prospect Jalen Wilson, of Guyer High in Denton, Texas, is expected to announce his college decision at 2 p.m.

Wilson, who recently visited KU after reopening his recruitment following a coaching change at Michigan is believed to be picking between KU, North Carolina and Michigan.