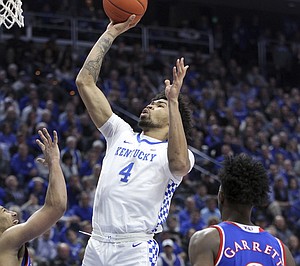 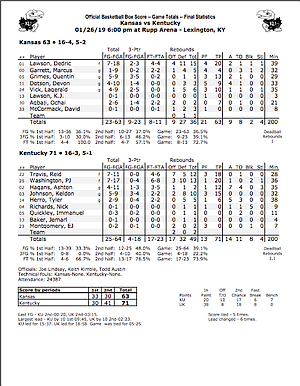 Coach Cal was more into it

As pontificated before, Dedric needs to post 30 points/15 rebounds for KU to have a chance to win these types of games against bigger and more talented front courts. Mitch can’t even find the floor and David is not ready to score in double figures when subbing for Dedric. Dedric is the only reliable offense threat going into each game, even when he is the opposing team’s defensive focus. Who will pick up the other scoring game in and game out is a crap shoot? Udoka’s loss is magnified when playing against bigger, more athletic front courts. Not sure KU would fare well against Michigan State, Tennessee, etc. if those games were played now. De Sousa helped save KU’s season last year when he was finally cleared in the second semester. One can only hope he will somehow get cleared before much longer, which I originally predicted to be zero after the Adidas trial. Now I am hoping for NCAA compassion.

De Sousa is not going to get cleared. Clearing him in no way puts more money in the NCAA's pocketbook, the coaches pocketbook or administrators pocketbook. The NCAA won't even make a decision. They will let it sit until the season is over, claim their is a process and protocols to follow, wait for De Sousa to declare himself pro and call the question moot. They never do anything on behalf of the player unless the player's parent is dying and they want to transfer.