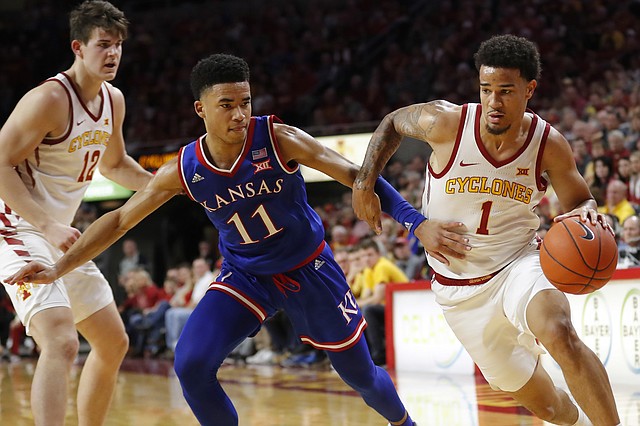 Iowa State guard Nick Weiler-Babb (1) drives to the basket past Kansas guard Devon Dotson (11) during the first half of an NCAA college basketball game, Saturday, Jan. 5, 2019, in Ames, Iowa.

Winning inside a hostile Hilton Coliseum is no easy task.

No. 5 Kansas did itself no favors, though, during Saturday’s 77-60 loss to Iowa State. The Jayhawks struggled to take care of the ball on the offensive end, and they gave up to many open looks on the defensive side as well.

The unranked Cyclones cruised to a victory to hand the defending conference champions their first loss of Big 12 play.

KU finished with a season-high 24 turnovers, posting a 33.3 turnover rate in the lopsided defeat. Iowa State connected on 13 of its 25 attempts from beyond the arc, and were able to maintain a double-digit advantage during the final 10 minutes of the contest.

For Kansas, the bad vibes began a little over an hour before tipoff. Starting center Udoka Azubuike was ruled out for the game against ISU with a wrist injury that he sustained during practice.

In a losing effort, freshman Quentin Grimes led the team with 19 points on 7-of-15 shooting. Dedric Lawson was the only other Jayhawk to finish in double figures, posting 13 points on a 5-for-11 effort.

• The game turned when: Iowa State hit back-to-back triples midway through the second half.

Despite a multitude of turnovers by Kansas, ISU just couldn’t seem to put away the defending champs. That was until the Cyclones buried consecutive 3-pointers midway through the second half to give the Jayhawks their largest deficit of the season at the time.

Tyrese Haliburton drilled a 3-pointer with 10:04 left in the game to give Iowa State a double-digit lead. Lindell Wigginton then knocked down a triple on the next possession, stretching the advantage to 13 points. It proved to be the decisive blow to bury Kansas.

• Offensive highlight: Freshman Quentin Grimes was the team’s most impactful player for much of the afternoon.

Late in the first half, though, Grimes had a stretch where he scored 11 consecutive points for Kansas to keep the visitors in the game. Grimes was finding a way to put the ball through the net in a variety of ways, as he filled the lane correctly on fastbreaks and he connected on spot-up 3-pointers as well.

It marked the third straight game that Grimes had scored at least 14 points, which included two times against Big 12 foes.

• Key stat: The Jayhawks struggled to take care of the rock against the Cyclones, especially in the first half.

Kansas turned the ball over on 40 percent of its possessions in the first half, meaning the visitors coughed the ball up 14 times on 35 possessions. It was one of the reasons that Kansas struggled to get much going on the offensive end early on.

As a result, the four-point deficit at the intermission was a minor miracle for the Jayhawks.

•Up next: Kansas plays host to TCU at at 8 p.m. Wednesday.