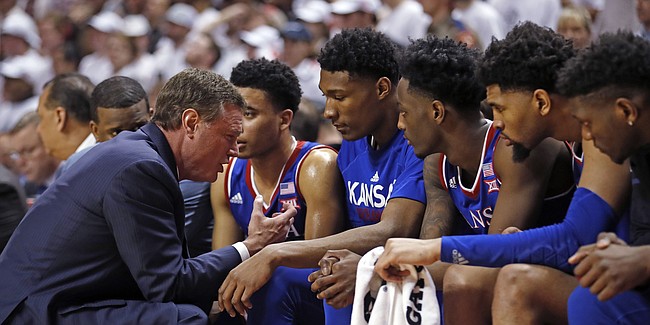 Kansas coach Bill Self talks to his players on the bench during the second half of the team's NCAA college basketball game against Texas Tech, Saturday, Feb. 23, 2019, in Lubbock, Texas. (AP Photo/Brad Tollefson)

Garrett, who checked into Saturday’s 91-62 loss at Texas Tech at the 14:49 mark of the first half, scored on the Jayhawks’ first possession, coming free underneath after some confusion by the Texas Tech defense left him wide open for the uncontested layup that pulled the Jayhawks within 18-10 in a game in which KU never again trailed by single digits.

In all, Garrett played 22 minutes in his first game back and shot 4-of-6 from the floor and 1-of-1 from the free throw line for 9 points. That ranked him second behind Dedric Lawson’s 14 points on 3-of-8 shooting and the Jayhawks (20-7 overall, 9-4 Big 12) were clearly thrilled to hear that one of their most poised and experienced perimeter players was back in the lineup this week.

“I think we’ve gone through enough people being taken away,” junior forward Mitch Lightfoot said. “We might as well just add someone back. Marcus has been working really hard and we’re all excited for him to get back and give us another guard out there. It allows for us to play even more aggressive. You kind of have to dial it back a little bit when you don’t have (a great) amount of depth. He also brings a calming presence to the team, too. So that’ll be important.”

Asked how his injured left ankle felt upon his return to the floor, Garrett said he had no issues. 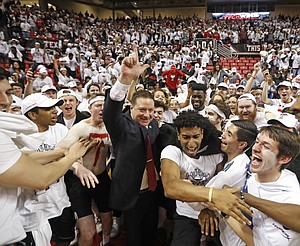 “I think it responded pretty great,” Garrett said. “I felt good at the beginning of the game.”

Added KU coach Bill Self of Garrett’s return: “I thought he did fine considering he hadn’t been out there in three weeks. He tested his ankle a little bit and I thought Marcus did some good things.”

KU’s loss Saturday and K-State’s home win over Oklahoma State put the Jayhawks two games back in the Big 12 standings with four games to play.

Luckily for the Jayhawks, their next game — 8 p.m. Monday at Allen Fieldhouse against KSU — affords them the opportunity to pick up one game in the standings with a victory.

K-State defeated Kansas earlier this season in Manhattan and the Jayhawks, despite Saturday’s disappointment at Texas Tech and quick turnaround, believe they’ll be ready for the massive Sunflower Showdown that will be staged roughly 48 hours after the final horn sounded in Saturday’s loss in Lubbock.

“It’s a challenge,” Self said. “But it’d be a challenge no matter what. The Big 12 plays us at 7 o’clock (vs. Texas Tech) and then we have to get home at 2 (a.m.) and get ready to go on Monday. It’d have been a lot easier to prepare if we had won here, but it’s one game. It doesn’t matter if you lose by one or lose by 30, it’s one game. “That will not put a damper on our spirits and getting ready to play K-State on Monday.”

With six full days off between games, the Jayhawks had plenty of time to rest, scout and prepare for the Red Raiders heading into Saturday’s matchup.

That recipe has spelled disaster for most of KU’s opponents since Bill Self took over in Lawrence. 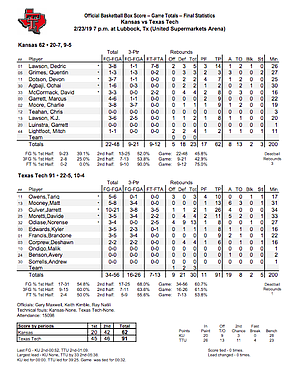 That winning percentage (.875) is the best in NCAA Division I during that time frame, putting KU just ahead of Duke’s mark of .864, which ranks second.

Saturday’s loss snapped a seven-game winning streak in Lubbock and the Jayhawks are now 14-5 all-time against Texas Tech in its home venue, including a 10-4 mark at United Supermarkets Arena ... Before Saturday, Texas Tech’s last home win over KU came on March 4, 2009 ... The Jayhawks’ five conference losses tie them with last year’s total with four games still to play ... Kansas leads the all-time series with Texas Tech 35-6 ... The Jayhawks are now 2-7 in true road games this season and 6-7 in games played away from Allen Fieldhouse. KU has two true road games remaining before postseason play — March 2 at Oklahoma State and March 5 at Oklahoma.

Bill Self discusses 29-point loss at Texas Tech by KUsports.com

K.J. Lawson: ‘Sometimes you get a flat tire’ by KUsports.com

“KU’s loss Saturday and K-State’s home win over Oklahoma State put the Jayhawks two games back in the Big 12 standings with four games to play”. The streak is over and KU, since Udoka went down, has rarely resembled a team that can advance past the first round of the NCAA. When Udoka went down, I thought KU would likely finish 3rd or 4th in the league. The two hotest teams in the Big 12, TTU and KSU, are clearly head and shoulders above the rest of the field and neither look like they will collapse. TTU is on an impressive roll and has dominated (lead by 25+) in every game since their road loss to KU. KSU took care of business at home and was able to rest their starters against OSU. Self’s recruiting finally caught up with him. Experience and continuity does matter and clearly not all McDonald All Americans are created equally. Furthermore, I can’t remember a senior day, with no seniors. KU’s game on Monday will only determine if TTU and KSU share the regular season title. This season has demonstrated how great expectations (preseason #1 in some polls) are not achieved when the puzzle pieces just never fall into place.

One of those puzzle pieces was ripped from us by the NCAA - Silvio De Sousa would have been a big help if his "guardian" and the NCAA hadn't screwed him over.

You are right, though. This team appears destined to go down as the most underachieving Kansas team since maybe the 2014 team that had an embarrassment of talent and didn't even get to the Sweet 16.

I'm not sure the talent was ever really there. This team doesn't believe in itself and/or/both Coach Self.

Self's recruiting has caught up with him! Poor planning when it comes to big men and outside shooting. We keep bringing in Superior Athletes that can't shoot at this level!

One can only hope HCBS finally gets a clue and benches Grimes for KJ. It's been obvious the past 5 games....our starters should be Dotson, Ochai, KJ, Dedric, and Mac.

Who came up with the defensive plan? Snacks? The Hawks did a good job sagging to prevent easy scores down low...and, as expected, to ball zinged out to a wide-open shooter who couldn’t miss. Rinse and repeat.

They should be rested up for Monday night -- because they barely seemed to put an effort into this one. Cmon boys! Pound the Kitties!

We're still talking about a conference title? I don't want it now. What does it say about the conference when the winner loses games by 17 and 29 points. Go Tech!

Go Tech?? And the morning after, nonetheless? You can leave this site now

A complete, utter, total embarrassment. No other way to spin it.

I'd be curious to know where this hospital job ranks among the largest margins of defeat in KU history. I know it's not in the top 5, but it's gotta be in the top 10 of worst defeats.

They should be embarrassed to wear the KU uniform. I cannot remember a loss like this. You should have blood on your uniform, bruises, cuts. You cannot lose like this. Be tough like the Morris twins. Go down with a fight not a whimper.

I would NEVER be embarrassed to wear a KU uniform. You have completely disrespected every Jayhawk athlete who has ever worn the uniform because Texas Tech pounded us on national television? I'm not sure I believe that anyone gave you a thumbs up.

Don't want to buy authentic apparel is one thing but to actually wear a Kansas uniform or have my daughter wear the uniform would have been everything but embarrassing.

BJ is not the one who insulted previous KU athletes. The players themselves are the ones whose performance last night was an insult to the KU legacy and a disgrace to the uniform they wear.

This team is what it is . The " ESPN " Blue Devils are all that seems to matter this season The loss to a bad West Virginia team said it all. As far as us not winning the Big 12 Im not upset if K-state wins Although born and raised in Kansas i have lived in Texas since 1983 and still a Kansan inside. Keeping the trophy in Kansas although it might be in Manhattan it stays in the state so thats the only good thing I can say about this season .

Overstatement Day after a Loss. Sometimes it's hard to hold back. I try not to be brutal because Coach Self time and time again has proven me wrong.

Guys, granted this team isn't living up to pre-season expectations but you guys are being pretty brutal to kids that you most likely couldn't compete with in your prime. This is not an easy game, talent or not. As much as this sucks it should go to show you how good coach has been for 14 years. We truly are a spoiled fan base. We're having one down year. We're due. It wasn't supposed to be this way but it is. We've been the beneficiaries of lots of opposing team's injuries, dismissals, ineligibilities and balls bouncing our way. It just hit us all at once this year. There's STILL A CHANCE! Albeit not a great one, but there's still a chance as long as we win out and a few things go our way. We have to win tonight. Personally if we don't win it, I'd rather Tech win it. Forget keeping the trophy in KS. KSU fans live in Kansas and they're the worst. I actually respect Chris Beard. I don't respect ole Brucey. That said we all want this team to do well and they still might. They still might...