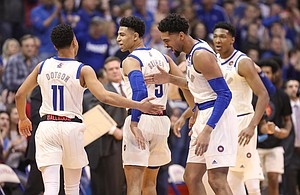 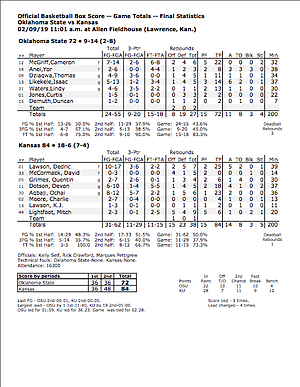 Yeah, a 3-seed sounds just about right for Kansas. It's nothing to be ashamed of; we've been a 3-seed before. And we got to a Final Four as a 3-seed in 1991. We can still say we've never been seeded lower than 4th in the Self era if we get a 3-seed.

As for the uniforms...I don't care if they're for a good cause or not - BURN THOSE UGLY JERSEYS!

GOOD CAUSE??? THEY WERE FOR BHM

Ballroom is ironic if you ever stepped foot on a court these days with dress shoes on. You'd be tossed out of class by security. I'd be interested in an article with more history on this harlem thing. If it's just a black thing then why is it promoted and not racism?

Surprised the committee kept KU in the top 16 (number 10). Their way too early third seed is all based on early performances and KU's strength of schedule, but normally the committee takes into account serious injuries. It is unlikely that KU would have beaten the likes of MSU, Marquette, Tennessee, Villanova without Udoka (and Vick). KU is likely to fall again in the AP rankings after a week to losing to "unranked" KSU (actually #29) and beating an even more depleted OSU team. Thanks to Baylor folding, KSU holds a 2 game lead in the Big 12 (yes, officially 1.5 games but 2 games in the loss column which is all that matters) and should vault over both ISU and KU in the standings. Unless KU wins out (wishful and unreasonable thinking given they have struggled mightily on the road), it is doubtful they will be seeded this high. There is a lot of basketball to play, including the Big 12 tournament, but KU has little margin of error and must hope their re-invented team can play well on the road starting Monday.

until unless we can win the rest of b12 regulars, and produce consistently 80 pts per game, we're worthy of #3 seed, oh, and we keep TOs under 10. I think we deserve the ranking. like you said, there's no room for any errors starting now. either we kill or get killed. if our guys don't give their 210% from now on, we won't even make the 1st round. our guys need to be more aggressive, meaning more physical, dribble drive with a purpose, use upper shoulder to hit the rim instead of being pushed out by opponents or too early to jack up stupid layups all the time.

There is where their non-con schedule pays off. They are not one of the top 12 teams right now but 3 wins over top ten teams plus another win over a top 20.

As we figured, we're looking back at the loss at WVU as what probably may keep us from #15. But now four starters down, the team needs support more than ever with just 8 scholarship players available tonight (did I get that right?).