Kansas guard Brooklyn Mitchell gets in for a bucket during a Late Night in the Phog scrimmage on Friday, Oct. 4, 2019 at Allen Fieldhouse.

Sophomore guard Brooklyn Mitchell posted a career-high 24 points as Kansas women’s basketball battled to an 86-81 win over Saint Mary’s on Sunday afternoon in Allen Fieldhouse. Five players scored in double figures for the Jayhawks, who improved to 9-0 on the year.

A 12-0 start by the Gaels (4-5) put the Jayhawks in a deficit early in the first quarter. Saint Mary’s had a 10-point lead late in the first, but Kansas eventually evened the score, 19-19, at the end of the quarter. Despite the slow start, Kansas led Saint Mary’s heading into the half, 41-34. 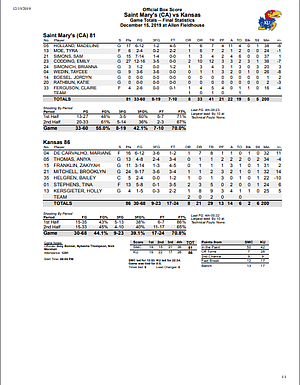 While the Gaels outscored the Jayhawks 22-17 in the third, it was the fourth quarter that pushed KU to its latest victory. In the final two minutes of action, Thomas hit a 3-pointer to cut the Gaels’ lead to 2 points. A layup by De Carvalho tied the game at 79 with one minute left to go in the contest.

At the 32-second mark, Thomas drilled a clutch triple to give KU the lead for good. A couple of trips to the free-throw line capped KU's 12-2 run down the stretch in the narrow win. Kansas is now one of only 14 undefeated teams remaining in the nation.

KU will travel to Saint Louis at 1 p.m. Sunday.