Carter Stanley’s college career is over and the Kansas football program needs a starting quarterback.

While it’s possible Stanley’s replacement could already be on the roster, KU head coach Les Miles said following his team’s finale that the QB position will be one of priority as the coaching staff turns its focus to the recruiting trail.

“Certainly we need a quarterback,” Miles replied, when asked about his general plans headed into the offseason.

KU’s head coach followed up that statement by making it clear the staff likes Thomas MacVittie and Miles Kendrick, who spent all of 2019 as reserves.

“But if we can find a great class, a great quarterback in this class, we'll take one,” Miles added. “Although we have another — we have a pretty good quarterback that could be a part of us already.” 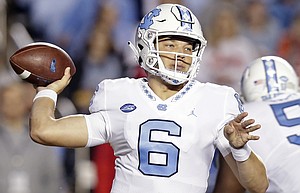 But as Miles indicated, the Jayhawks could add another. As reported by Brandon Huffman of 247Sports, KU coaches are recruiting former North Carolina quarterback Cade Fortin.

A class of 2018 signee for the Tar Heels who entered the transfer portal ahead of this season, Fortin told 247Sports that he’s “concentrating on” KU, Syracuse and Vanderbilt at this stage of his recruitment.

A former UNC teammate of Manny Miles, who joined the Jayhawks as a walk-on graduate transfer, Fortin visited KU in early November. On Sunday night, KU offensive coordinator and QBs coach Brent Dearmon made an in-home visit with Fortin.

None by Cade Fortin

Fortin played in four games for the Tar Heels in 2018, including one start against North Carolina State. Now listed at 6-foot-3 and 220 pounds, Fortin completed 49.2% of his 65 passes at UNC, with one touchdown and one interception. He also rushed for 76 yards on 14 carries, with one TD.

The top two spots on KU’s QB depth chart this season were occupied by seniors, Stanley and Manny Miles.

MacVittie, a junior whom Miles described as a “very viable” candidate to be KU’s next No. 1 QB just a week ago, only played two snaps in games this year. Each time he lined up at wide receiver, and on one of those occasions he threw a pass, which was intercepted, on a trick play.

Most of the work for KU quarterbacks other than Stanley came during the team’s closed practices. Stanley, who finished his final season with 2,569 passing yards, 24 TDs and eight interceptions, described recently what he witnessed from other QBs on the roster over the course of the past year.

“I mean there's a group of guys that they go to work every day, whether they're working with the ones and twos on offense or the scout team. It's a group of hardworking guys, really high-character guys. It’s MacVittie, Miles Fallin, Miles Kendrick, those guys are working really hard,” Stanley said. “They all definitely bring something different to the table skill-wise and technique-wise but just some high-character people.”

Notably, Stanley didn’t mention freshman Torry Locklin, who spent much of the previous offseason as a QB but switched over to play some running back during the season and appeared a few times in games as a Wildcat QB.

Miles recently said he wasn’t sure which position Locklin, who played in four games and will use this year as a redshirt season, will be at moving forward.

Stanley obviously didn’t know or couldn’t say whether Locklin might return to QB for next year.

“I talked to him when he first made the change and I just wanted to tell him that he's obviously a very talented kid, extremely talented football player,” Stanley said. “That dude could play quarterback, receiver, running back — he can do a lot. Whatever he goes with I think he's got a really bright future and just a great kid on top of that.”

Ahead of spring practices, the Jayhawks also are set to add another scholarship QB in Jordan Medley, a 6-2 athlete who was listed as part of the 2019 signing class but won’t enroll at KU until next semester, as a grayshirt.

I loved Carter, I felt like he got kind of shafted by the previous staff, but he wasn't terribly consistent, probably not all on him.

Fortin’s numbers remind me of Macvittie’s. Not too impressive. Obviously, Miles has a little more insight to Fortin’s capabilities but this concerns me a little.

The headline needs to read, “recruiting a GOOD quarterback a priority”. Then my response is YES, YES, YES. Freaking Iowa State and Baylor can find good quarterbacks. Baylor was on a 1-11 campaign when they landed theirs. We can surely get a good quarterback and coach him up. PLEASE!!!!!

If we go with a 5th year senior next year Thomas MacVittie and Miles Kendrick, then it will be another wasted year in the program and I think the Coaching staff understands this. I'm not saying that either of these young men can't play, but for the future of the program, we need to start either a 1st or 2nd year player and allow them two or three years to truly develop into the system. This will also allow the coaching staff to recruit over him in the future.

That's pretty harebrained...starting with classifying Kendrick as a senior.

Maybe you'll volunteer to tell next year's senior class...Thanks fellas but we've brought in a bunch of freshman. We know they're not ready but we're going to play them anyway.

Kendrick is a RSSoph this year. He only played 1 semester of JC ball before enrolling 2 years ago as a full qualifier.

Gotta be concerned about anybody that isn’t completing 60% of their pass attempts.

Carter had an enlightening comment in an article ahead of senior day. He commented on always feeling he needed to prove something so he tended to go for the big play instead of the easier, more reliable and drive sustaining play. That changed during this past summer and so did his status from part of the competition to leading. He recognized the reason he hadn’t been starting and fixed it so he could. Maybe there’s a lesson for one of the other QBs or commenters.

I had no idea he was already a RS Sophomore. That definitely doesn't sound like he's our QB in waiting but I'm not the head man. I guess time will tell. Thanks for the info I honestly thought he was a freshman. I think maybe I was thinking Locklin.

Interesting thought - A year ago Carter was the senior being recruited over. Seems like that worked out okay, though until there’s a heisman there’s always room for improvement.

I agree with Doug’s comment. Until we can develop a Big 12 caliber offensive line (and defensive line too preferably) we will struggle at the QB position no matter who’s there. I think we unfortunately lose several starters from both lines this year so we might have a worse record next year even as other positions are upgraded.
We need to continue to land three star high school kids, red shirt them their first year, then have them as back ups for a year or two and be solid starters and contributors as upper class men. It’s a process and made more difficult with our scholarship limitations. That being said, I’m excited to see Locklin play. He looks like he has nice upside potential.

Continue to recruit 3 star kids with your plan that goes something like this..."KU is a great school and we want you to join our football program. And oh by the way you'll have to sit out your first year, mostly sit on the bench for a couple of years and get a real chance to play 4 years from now".

My vote's for Tory Locklin. The way they describe him - great athlete, could play any position - reminds me of Nolan Cromwell.