Blue team quarterback Thomas MacVittie cuts through the defense during Late Night Under the Lights on Saturday, April, 13, 2019 at Memorial Stadium.

Precisely how soon the decision will be reached remains to be seen.

But sometime in the days or weeks ahead, Kansas football coach Les Miles will see enough of some specific qualities in one of the team’s two most trusted quarterbacks that the head coach and his assistants will be ready to name a starter.

Considered by many to be the favorite in the QB race since the spring, junior Thomas MacVittie hasn’t beaten out senior Carter Stanley for the job yet. Eventually, either MacVittie, a junior college transfer who signed with KU after Miles took over, or Stanley, a fifth-year veteran of the program, will be declared the winner.

Outside of the obvious qualities needed at the game’s most visible position, such as accuracy, pocket presence, mobility and mastery of the play book, Miles said there are other traits that the team’s No. 1 QB must possess.

“First of all they have to have some composure,” Miles responded, when asked what he’s looking for out of a starter. “You have to understand that there’s a length to the game and we’re going to make some plays, and frankly we need to make sure that the quarterback does those things that help his team win.” 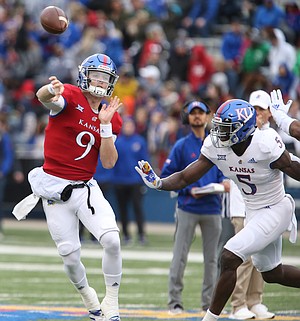 Listed at 6-foot-5 and 215 pounds, MacVittie looks the part of a prototypical QB and has demonstrated his athleticism makes him more than a stationary thrower in the backfield. As a sophomore at Mesa Community College (Ariz.) in 2018, the former Pittsburgh signee played in six games and completed 92 of his 172 passes (53.5 percent) for 1,064 yards, with 16 touchdowns and eight interceptions. MacVittie also rushed for 252 yards on 41 carries and ran for four touchdowns.

Over the course of the previous three years at KU, Stanley, listed at 6-2 and 198 pounds, has completed 228 of his 388 career passes (58.8 percent) for 2,371 yards, with 13 touchdowns and 14 interceptions. In 2018, while making two starts and appearing as a reserve in five other games, Stanley went 34-for-47 (72.3 percent) through the air, throwing for 304 yards and three TDs, with one interception. During his junior season Stanley also was credited with 21 rushing attempts (six of which were sacks for a combined loss of 33 yards) and ran for a net of 38 yards on the season.

Based on what Miles saw during KU’s 15 spring practices, he gave MacVittie a slight edge in the competition heading into preseason camp. The coach said on Friday that both candidates for the staring gig have proven capable of executing in a fashion that advances KU’s chances of winning.

KU’s head coach repeatedly has stated he won’t rush a conclusion to the race. Yet he also has maintained a quiet confidence on the matter, just as he has with other position groups.

“I like where we’re at,” Miles said, “at quarterback.”