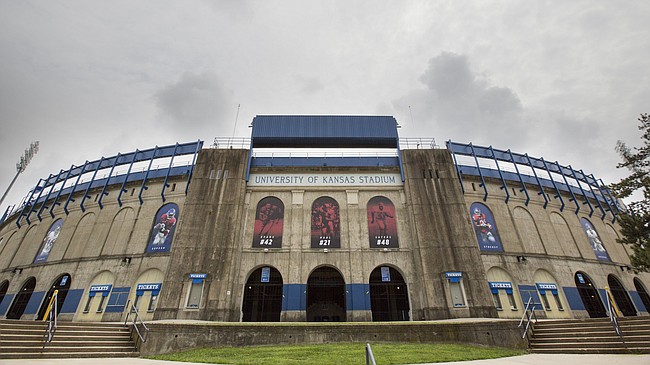 Multimillion dollar renovations to Allen Fieldhouse and David Booth Kansas Memorial Stadium could be coming for KU Athletics, but details on what the projects would entail are not clear.

During its April meeting on Wednesday, the Kansas Board of Regents gave initial approval to a five-year capital improvement plan at Kansas universities, which included setting a series of dates for the $300 million worth of renovations to KU's stadium and a one-time $20 million renovation to the fieldhouse.

Kansas Athletics officials did not respond to a Journal-World request for information on the projects. Dennis Mullin, chair of the Kansas Board of Regents, said on Thursday that he did not know the specifics of the projects, but Regents documents show the projects would be funded through private donations.

The university previously announced a $350 million renovation of the stadium and other athletic facilities, funded by private donations collected through the “Raise the Chant” campaign. The football stadium portion of the project consists of renovations to end zone seating in the north and south sides, which would include closing the horseshoe shape of the stadium into a more bowl-like structure.

The football stadium portion was originally slated to begin after the conclusion of the 2018 season, but KU Athletic Director Jeff Long said in September that it would be pushed back while he focused on getting the football program in a better position.

Long later hired Les Miles, who won the 2007 NCAA National Championship with Louisiana State University, to lead the program. If the five-year capital improvement plan remains intact, the renovations would likely begin after Miles’ second season at the helm.

$6.2 in the first year sounds like prep work for a pretty big undertaking in year two.

Long was so wise to push this back. He has a coach who is generating a good amount of excitement and goodwill in the community, and that's going to help the fundraising. I cannot wait for the first home game.

Just don't obstruct the band from running into the stadium. Other than waving the wheat, it's the only meaningful tradition for KU football.

At some point in time...especially if KU can't get football turned into a cash cow...a new basketball venue is going to have to be considered. There is only so much revenue that can be squeezed out of 16,000 seats. Good god I paid $60 to see KU beat up on a very inferior opponent. So playing challenging opponents is going to cost $120 a seat? $200 a seat? Are we going to have to pay $20 a game to view on TV/computer/phones? KU needs between 18,000 and 20,000 seat arena and given the structure of AFH I don't see how that can be accomplished at that venue.

I can't believe I'm actually taking the time to reply to this silly message. But you know Cameron Indoor holds less than 10,000 people right? Do you think they're struggling with revenue?

Yeah, lets demolish AFH, one of the most storied arenas in college basketball, so we can build a new arena with a few thousand more seats. That solves everything. Genius, just genius.

Allen Fieldhouse is not being replaced. Coach Self has gone on record as such.

Besides all of the tradition, and the fact that there have been millions invested in the adjacent structures, it would also take something along the lines of a 50% increase in the footprint of the building to get as much as we've got. Current building codes would not allow it to be rebuilt just a little bigger. The rules are different for renovations vs. building new.

In some ways it is like Notre Dame - the cathedral not the uni. There might be changes, but Allen Fieldhouse is here to stay.

As a KU Architectural School graduate and a licensed architect for over 40 years, I sat down once, just as an exercise, with a set of drawings from Allen and was able to add at least in theory, 1, 000 more seats.

However, the price was making every seat in the house totally uncomfortable by squeezing them down to the limit, adding new seating that would provide partial sight blockage and adding seating in the corners that were totally uncomfortable, in accessible and, quite frankly, dangerous as hell to get to and leave.

The whole point is mute since the Fire Marshall, per Kansas State Code, has set the maximum capacity at 16,300 and that's final.

The only way to expand the seating in Allen while maintaining Fire Code requirements would be to actually increase the size of the Field House by blowing out the end of the building opposite the garage, rearrange circulation at the exterior, shift the court, add floor seating, increase the sprinkler capacity, etc., etc,. Needless to say, a nightmare that would shut Allen for probably at least couple of seasons. The Sprint Center would be the most likely candidate to serve as the Jayhawk's temporary home.

But the point is moot. Not mute.

If you can no longer talk about it, that's kind of mute. :)

Good knowledge on the Fire Marshall and Kansas State Code.

It is always interesting when spectator imaginations run headlong into reality.