Spring games aren’t supposed to reveal much of anything about a college football team’s potential — head coaches such as Les Miles would have it no other way.

Appropriately, as Miles, the former national championship winning coach at LSU, made his Kansas debut Saturday night at David Booth Kansas Memorial Stadium, he and his staff went out of their way to get as many Jayhawks involved as possible, even rotating between four quarterbacks throughout the first half.

The presumed frontrunner for the starting QB job when the games actually count this coming fall, junior Thomas MacVittie, started. But after a series he was replaced, and the revolving door at QB kept on turning throughout the scrimmage, as an estimated crowd of 5,000 got its first glance at the Miles-coached Jayhawks at an event KU rebranded this spring as “Late Night Under the Lights.”

First it was MacVittie at QB. Then came Miles Kendrick, followed by Carter Stanley and Torry Locklin, all before the first-quarter clock hit the 8:00 mark.

And with none of the passers in long enough to develop a real rhythm, it was the Jayhawks’ running backs who ended up stealing the show.

Stanley, the team’s redshirt senior QB, tried to open the offensive floodgates with a deep shot down the field for Kwamie Lassiter II, but their timing was off, leading to an incompletion. 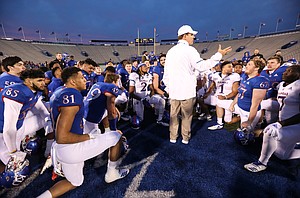 The scrimmage wouldn’t stay scoreless for long. On the very next snap, junior running back Dom Williams took off down the right sideline for a 52-yard touchdown.

Williams, who finished with 97 rushing yards and two touchdowns on 12 carries, proved to be a trendsetter for the exhibition, as long runs ruled the night.

Freshman QB Locklin took off next, going 38 yards on his first series — one that concluded with the 6-foot-2, 210-pounder from Rockdale, Texas, basically walking in for a short rushing touchdown and the scrimmage’s second score.

While that early TD put the Blue team up 14 points, the White team never really stood a chance on the scoreboard. With an offense versus defense format, Blue rolled to a 45-7 victory, powered by 454 rushing yards. 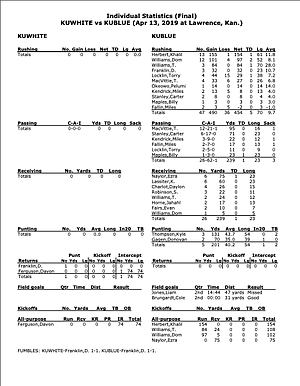 KU’s passing attack was far from nonexistent, though. On the third scoring series of the first quarter, catches by junior transfer Ezra Naylor on passes from MacVittie kept the drive alive before Williams ran in for his second TD.

The only significant miscue of the opening quarter — the scrimmage featured two 15-minutes quarters in the first half, then a 30-minute running clock after halftime — came on a punt, when walk-on Donovan Franklin muffed a punt. But long snapper Logan Klusman helped the Blue team salvage the mistake with a recovery.

The White team, better known as the defense on this night, then lulled the exhibition to a slower pace with stops in the second quarter, before sophomore receiver Takulve Williams took a handoff in the backfield and shot down the left sideline for a 70-yard score.

Takulve Williams finished with 84 rushing yards but was only third on the team in that category, behind Dom Williams (97 yards) and senior running back Khalil Herbert, who rushed for 154 yards, a personal long of 61 yards and one TD.

Oddly enough, the only passing touchdown of the night came early in the second half, when Miles was giving his walk-ons reps at quarterback.

Redshirt freshman Billy Maples went on the move to keep a play alive and completed a 23-yard TD pass to Naylor (team-best 75 receiving yards on six catches), in an open spot between three Kansas defenders in the end zone.

But the other scholarship QBs weren’t done for the night. MacVittie returned for a few second-half snaps before finishing his unofficial KU debut 12 for 21 through the air, with 95 passing yards.

The 6-foot-5 former Pittsburgh and Mesa Community College (Ariz.) QB would also finish the night credited with the offense’s only turnover. Senior safety Shaq Richmond deflected a MacVittie pass and redshirt sophomore safety Davon Ferguson got to do the fun part, speeding the other direction for a 74-yard pick six, giving White it’s only score. 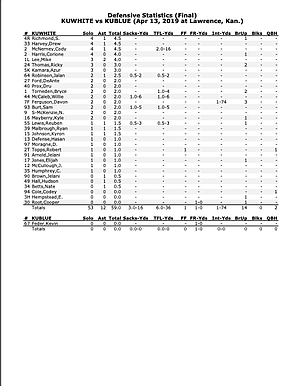 Naylor and Lassiter proved to be popular targets for Kansas quarterbacks. The two receivers tied for the team-lead in catches, with six apiece. Lassiter’s grabs turned into 60 yards of offense.

Neither Miles nor any KU football players were made available for interviews after the spring game. The program’s communications staff cited “logistical time constraints” for the lack of postgame comments, with rapper Rick Ross performing on the stadium’s turf after the scrimmage.

Miles and select Jayhawks are scheduled to speak with the media on Monday.

Not sure where the crowd estimates came from, but way more than 5k

I was thinking the same thing. We had to watch on espn+ but it appeared the stands on that one side were pretty close to full. I wonder if that "5" was supposed to be "15?"

Damm. Wish I had known it was on ESPN+. I just cancelled my subscription last week.

I agree. 10k. About the same number were there who attended the Roy Williams, "I'm Stayin' (not)" announcement.

I thought our O line looked much more cohesive. Our RBs ran the show. Kwame Lassiter is no Steven Sims, I can tell you that. Ezra Naylor looked pretty good. Carter Stanley should start. That kid has a presence and swagger that none of the other QBs have. Our D line needs work, but our secondary looked pretty good for the most part. All that being said, it is just a spring game. However, I thought the team (at least at this stage) looked better than teams from the past 5 years.

When the game 1st came on we had the view of only THE BAND AND nothing else. Thought to myself - -oh geez - this is really gonna look great , that No one was there at all. - Then found out they were all sitting on the opposite side - - really nice crowd. - Hell can't wait tell there comes the time when we have both sides pretty much full for the spring game. - Coach WILL get this turned around. - -ROCK CHALK ALL DAY LONG BABY

I was there and it was much closer to 10,000 than 5,000 (closer to 5,000 after half). The attendance could have been better if the weather was nicer. It felt more like a November game for some of us old folks than an April scrimmage. I will say Miles has the attention for details and made a point of getting in the face of any player for whom a penalty was assessed. He even immediately excused a player, I think for the rest of the scrimmage, when he knockout down a QB (was not a punishing hit by any means but the player broke the unwritten rule of never hitting anyone wearing a red jersey). I will give credit to the athletic department for trying something new to renew interest in the football program. No idea what the many recruits and their families thought of the scrimmage and concert, but Miles clearly has a plan to improve this program. Also props to the video group who produced several videos to keep the fans entertained. Miles is clearly a ham and enjoyed being front and center in the movie satires. The Self/Miles pissing contest regarding who is the ball coach at KU is a keeper.

I guess I'll be the first to comment on the uniforms.

Pants - A. I'm a bit partial to the grey road pants.

Like seeing KU on both sides of the helmet as opposed to KU on one side and the Jayhawk on the other side. Either one or the other.

Mat or Benton - can we get an updated roster uploaded to this site? Thanks!
RCHJ!